Guest-hosting Fox News Sunday, Jennifer Griffin suggested to Jonathan Swan that Donald Trump's dinner with Nick Fuentes had triggered something of a wave of criticism of the former president among prominent Republicans.

But liberal reporters like Swan are trying to draw out fiercer criticism, including nudging Gov. Ron DeSantis to slam Trump. Swan dissented from Griffin's take:

"There actually haven't been that many prominent Republicans who have come out against Trump . . .  Which tells me there is still a fear among Republicans, even ones who want to oppose him potentially in 2024, that Trump still commands a serious, meaningful proportion of the base, and they don't want to cross him yet."

Then again, by adding that "yet" at the end of his comment, Swan seemed to suggest that criticism of Trump by prominent Republicans is a matter of when, not if. Swan pointedly mentioned that DeSantis has remained "completely silent" about Trump's dinner with Fuentes. Seems that the Florida governor is keeping his '24 powder dry.

Swan, relaying comments he'd received from members of Trump's team, indicated that they aren't "lighting their hair on fire" or "freaking out." For them, having been through a variety of Trump controversies, the Fuentes dinner is just "another day at the office." The dinner is odd, considering Fuentes previously heckled Donald Trump Jr.

Griffin clearly took a dim view of the Mar-a-Lago dinner, saying that Trump doubling the number of anti-Semites to the mix by adding Fuentes to Kanye, "should be cause for concern!"

Note the graphic in the screencap: "Democracy 2024." That sounds like something you'd expect to see on CNN or MSNBC--not Fox News Channel. More evidence that the Murdoch empire is moving away from Trump? 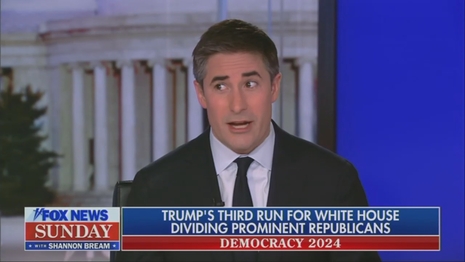 Swan will soon be moving from Axios to the New York Times. He has been one of the most fair and balanced reporters on the national scene. Let's hope that doesn't change when he goes to work for the Woke Grey Lady.

On Fox News Sunday, Jonathan Swan saying that there is still fear among prominent Republicans to take on Donald Trump was sponsored in part by Raymond James, Toyota, and Honda.

JENNIFER GRIFFIN: Jonathan, now to Donald Trump, and his third run for the White House. Are you surprised by the number of prominent Republicans who have come out against Trump, even as Attorney General Bill Barr writes, "Trump will burn down the GOP, time for new leadership"?

What's the reaction from Trump advisors to his dining with white nationalist Nick Fuentes at Mar-a-Lago last week?

JONATHAN SWAN: Well, there actually haven't been that many prominent Republicans who have come out against Trump. And you're even seeing, there's a few--Bill Barr has already condemned Trump before this. You see Chris Christie, he's pretty vocal. But even, you look at people like Mike Pompeo, Trump's former Secretary of State, he's criticizing Trump without naming Trump, which tells me, and Pence is being kind of gentle as well.

Which tells me there is still a fear among Republicans, even ones who want to oppose him potentially in 2024, that Trump still commands a serious, meaningful proportion of the base, and they don't want to cross him yet.

DeSantis, for example, is being completely silent.

Nick Fuentes, to your question, one of the most virulent anti-Semites, and just open racist. Holocaust denier. You just go through his clips. It's kind of staggering to listen to.

Trump's advisors, you know, most of his core team right now have been through Charlottesville, Access Hollywood, go through the list. This is sort of another day in the life of. They don't run around lighting their hair on fire.

I sort of see some people saying, they're all freaking out. That wasn't my experience the last few days, talking to them. These are people who, you know, it's just sort of another day at the office actually. And one person said to me, and I saw someone else sort of tweeted this. Basically their take was, this Republican official, he invites one notorious anti-Semite to dinner, Kanye West, and he shows up with another notorious anti-Semite. So, you know, the surprise was that there was two rather than one.

GRIFFIN: But it's doubling. Should be cause for concern!

SWAN: Yeah, yeah: two is worse than one. Yeah.