"You have Lindsey Graham talking about if, if Donald Trump's held to the same standard as every other American, then Republicans are going to go out and burn down cities. There's going to be riots in the streets. "

Graham did cite the possibility of riots. That was ill-advised, and Graham subsequently clarified his remark, saying “I reject violence. I’m not calling for violence.”

But—not to put too fine a point on it—Scarborough was outright lying when he claimed that Graham had claimed that Republicans would "burn down cities." Scarborough's lie was of the sort that can, in itself, provoke fear and violence. Scarborough should be ashamed, and should withdraw and apologize for his fear-mongering. But of course, he won't. 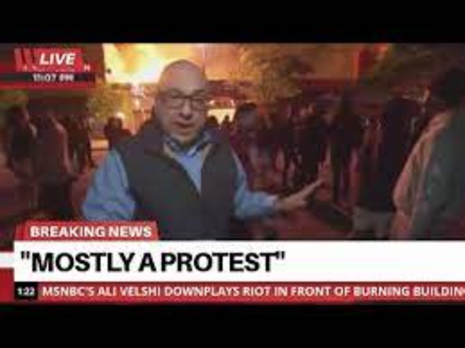 The irony is that, post-George Floyd, areas of American cities were burned. But not by Republicans. Who can forget Scarborough's MSNBC colleague Ali Velshi, and his "mostly peaceful" protests?

Note: Scarborough prefaced his fraudulent attack on Graham by boasting that he was the "first person" to call on both sides to work together. Perhaps Scarborough did say something along those lines at some point. But for the last seven years or so, his show has been one, unending, torrent of hyper-partisan vitriol aimed at Republicans. Scarborough piously proclaimed, "I just hate seeing these sort of speeches." Riiiiight.

Also: I Must Be Stupid!

Later in the show, Scarborough claimed that people would have to be "stupid" to believe that the photo that the FBI publicized of documents lying on the floor at Mar-a-Lago reflect how Donald Trump had left them.

Actually, upon first viewing, that's exactly what I thought: and I'm guessing millions of other Americans thought the same thing. It actually speaks worse that the FBI, apparently, carefully arranged the shot to show documents littered on the floor, and then made sure they were leaked to the public. 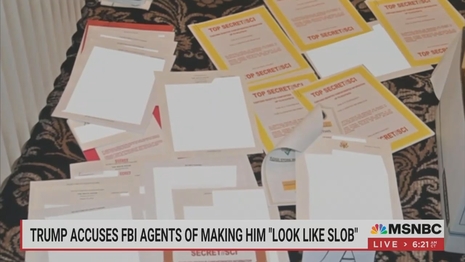 On Morning Joe, Joe Scarborough falsely claiming that Lindsey Graham had said that if Donald Trump is indicted, Republicans would "burn down cities," was sponsored in part by GlaxoSmithKline, maker of Shingrix, Subway, and Discover.

At the same time, I don't know. When you have Lindsey Graham talking about if, if Donald Trump's held to the same standard as every other American, then Republicans are going to go out and burn down cities. There's going to be riots in the streets.

MIKA BRZEZINSKI: In another radio interview, former President Trump spoke about the FBI search of his Florida estate for classified documents that he took with him from the White House, complaining the FBI agents made him look like a slob.

DONALD TRUMP: What they did here is they broke into the house, and they went to an area, that area is my office, I presume. And everything's neat. You know, I'm a very neat person. Everything's clean. Everything is buttoned up.

And they took documents, and they put them all over the floor. And then they deceptively put out that picture. And a lot of people think that when you walk into my office, I have confidential documents, or whatever it may be, all declassified, but I had confidential documents spread out all over my floor. And like a slob, like I'm sitting there reading these documents all day long, or somebody else would be.

It's so -- it's so dishonest when you look at it. And so people were, were concerned because they said, "gee, you know, that's a strange scene. You look at the floor and you see documents, right? They have cover sheets of documents.

SCARBOROUGH: I mean, the question --

MIKA: Where do you begin?

SCARBOROUGH: Mike Barnicle, how stupid does he think his MAGA followers are?

MIKA: He thinks they're very stupid.

SCARBOROUGH: Obviously, he thinks they're pretty stupid. But to suggest that a, a, a scene where the FBI gets evidence, puts it on the floor, takes pictures of it, that they were somehow suggesting that, you know, he just left stuff on the floor like that is so stupid. Of course he doesn't even believe it.