Just like some movies lets viewers choose among multiple endings, I feel like offering a choice of headlines today. Because Elie Mystal, the resident rhetorical bomb thrower on Tiffany Cross's MSNBC show, offered up a trifecta of terribleness—if that's a word.

So here are your options:

With Cross away, Mystal picked up her frequent call for Donald Trump to be salted away in the slammer. What Mystal lacked in terms of Cross's lurid fantasy about Trump being busted COPS-style, he made up for with his repeated expressions of frustration at Trump not being housed in the hoosegow. Mystal was at his most emotive at the top of the segment, kvetching: "why ain't this dude in jail?"

Mystal moaned over the possibility that allegedly lax security at Mar-a-Lago would allow access to the top secret documents Trump has reportedly stored there. At one point he said:

"Jared [Kushner], Steve Bannon—people that we know are on the grift—are just looking for the way to make their next buck. Like, we have no idea how many of Trump's cronies have seen the sensitive information, and what they're willing to sell it for. So the threat here is by all means real."

Headline #3: "Feds Afraid of What 'Angry White Boys' Would Do If Dear Leader Arrested"

No Tiffany Cross show would be complete without some reverse racialism. When guest host Jason Johnson asked Mystal why the feds have been slow to go after Trump on criminal charges, Mystal answered:

"I do believe that there are people in the federal government who are afraid of what, frankly, angry white boys will do if they arrest their Dear Leader."

As you see, I've gone with Headline #1, on the basis that, ultimately, the big story revolves around Donald Trump. But Mystal offers such a bounty of outrageous allegations to choose from, and none of them can be defined as something that can be defined as "news," which is supposed to be the point of a cable news channel. Instead, wild speculation about prison terms, selling out the country, and white-boy rioting is just thrown at the wall. 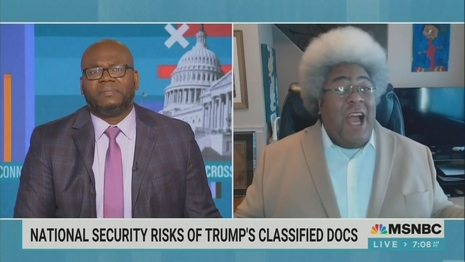 ELIE MYSTAL: My top level expert, legal analysis of the affidavit is, why ain't this dude in jail? Like, what does this man have to do to go to jail? . . . How is this man free?

You can't, you can't make what he had already found more serious, right? We're talking about sources, and information in terms of how we conduct national security.

And I don't mean like, random, his buddy friends. I mean Jared [Kushner], Steve Bannon: people that we know are on the grift --

MYSTAL: -- and are just looking for the way to make their next buck. Like, we have no idea how many of Trump's cronies have seen the sensitive information, and what they're willing to sell it for. So the threat here is, is by all means real.

JOHNSON: And that's the thing. I want to close with this. Because that's the the one that keeps getting me. It's not just, why is this guy not in jail? Why did it take so long to even get to this point? I mean, it's been almost a year-and-a-half. They knew he had the stuff there. Why do you think it's taken so long to move to this kind of legal investigation?