Scarborough Gloats Over Mar-a-Lago Search: 'No! Man! Is Above The Law!' 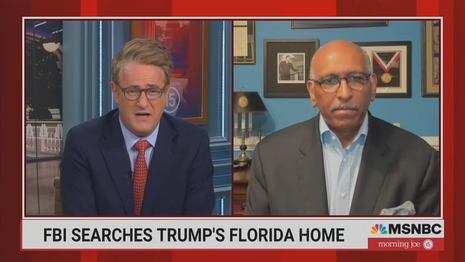 Some media people have been restrained, but MSNBC morning hothead Joe Scarborough was in all his predictable glory on today's Morning Joe over yesterday's FBI search of Donald Trump's Mar-a-Lago.

Inevitably, Scarborough broke out his "fascist" shtick, using the term nine times in one exchange with Michael Steele in describing Trump and his followers.

The exchange ended with Scarborough literally screaming at the camera

MICHAEL STEELE: This thing that this GOP represents under its current leadership is now increasingly more dangerous than it’s ever been.

STEELE: And that is profoundly important to understand right now.

SCARBOROUGH: You know why: because they're fascists. Like people that are making the threats, the people that helped Donald Trump on January 6th, the people that were talking about coming to D.C., that it was going to be crazy, that it was going to be wild, they were going to charge the Capitol, they're fascists. And so, they're making fascist threats, and we need to do what the United States has always done, we need to confront fascism and defeat it. So, everybody that's freaking out over fascists being fascists, well, guess what? That's what fascists –

SCARBOROUGH: That's why we have law enforcement, to actually bring fascists to justice. So, please, don't run around with your hair on fire and say, oh my God, we can't actually enforce the laws of our land. We can't actually protect classified documents, because fascists may get upset on a TV show

The panel commented on the supposed "irony" of the search happening on the anniversary of President Nixon's resignation in 1974. Surely Morning Joe can't be naive enough to imagine that was a coincidence. The search could have been conducted on any given day. But the FBI apparently thought it would be cute to do so yesterday. Merrick Garland, showing all those people who called him soft!

Speaking of Scarborough's shticks, another one is Joe frequently claiming—with ostensibly false modesty—that he's just a "simple country lawyer." He clearly wants people to think of him as a razor-sharp legal eagle.

Perhaps Scarborough skipped his Consitutional Law class the day they covered that.

On Morning Joe, Joe Scarborough glorying in the FBI search of Donald Trump's Florida home brought to you by Ring, Ensure, Sleep Number, and AT&T.

CHUCK ROSENBERG: This is literally unprecedented. It hasn’t happened. We have never searched the home of a former president. And we only did it because we had probable cause to believe that a crime had been committed. This is the Fourth Amendment standard, and probable cause to believe that you're going to find stuff related to that crime, evidence, in the place you've asked to search. Very big deal, unprecedented, but done lawfully and properly through a neutral and detached judge in another branch of government. This is not the FBI on its own deciding where to go and what to do.

SCARBOROUGH: Yeah, and, Chuck, I understand that the level, the degree of seriousness higher, the standard is higher for federal courts when they issue these sort of search warrants than in a lot of state courts. Is that true?