Scarborough Still Freaking Out Over Jan. 6, Cries 'Fascist' 12 Times for Trump and His 'Lackeys' 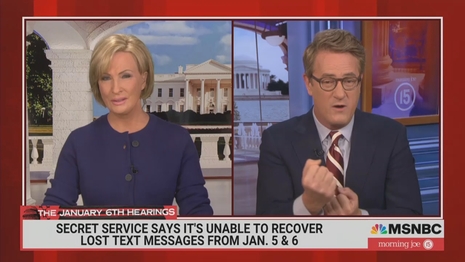 On Wednesday's Morning Joe, the crew fulminated over the deletion of text messages by the Secret Service from the January 6th period. Scarborough insisted the deletions were an intentional, malicious, cover-up, due to Trump's politicization of the Secret Service.  But what stood out was Scarborough flinging the word "fascist" to describe Trump 12 times, especially the "fascist takeover" planned for the day of riots.

Scarborough engaged in a favorite liberal exercise: angrily calling out Biden's Attorney Merrick Garland for not being partisan enough. Bellowing, "hey, Merrick!," he demanded that Garland charge Trump's "lackeys" in the Secret Service with perjury, convict them, and have them "thrown in jail."

When an image of Trump appeared on-screen at the end of the segment, an enraged Scarborough exploded:

MSNBC Republican Elise Jordan suggested you can't rule out government bungling, that "this is just idiocracy that a couple of days after something as huge as January 6th, that they go ahead with this planned migration. And it really just seems like utter stupidity and the incompetence of a government bureaucracy. "

Scarborough couldn't accept that line: "I just don't believe it's not malicious. It is malicious. Nobody's that stupid, not even bureaucrats that are the worst of the worst are that stupid." 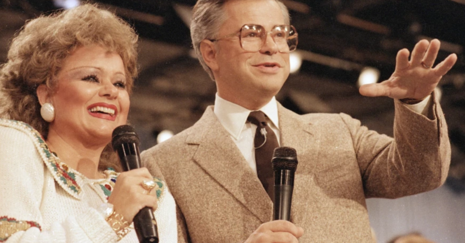 Scarborough then added something strange, saying that the people Trump set up to riot on January 6th are sitting in jail because they believed the "fascist lies" of "the Jim and Tammy Faye Bakker of our time."

We get that Scarborough sees Trump as Jim Bakker, the televangelist and convicted huckster. But who is the Tammy Faye in Scarborough's mind? Is Joe accusing Melania of being a criminal? Or Ivanka, perhaps? Scarborough shouldn't float such an ambiguous accusation of criminality--he owes an explanation.

If you want to talk about a married couple of flim-flam artists getting rich off exploiting a credulous audience of supporters, maybe it might look more like Joe and Mika. After all this base-arousing talk of "fascist takeovers," they can weekend in Nantucket.

On Morning Joe, Joe Scarborough accusing the Secret Service of intentionally, maliciously, deleting text messages from the January 6th period, and demanding that AG Garland prosecute Trump's "lackeys" in the Secret Service, was sponsored in part by Discover, AT&T, and DirecTV.

JOE SCARBOROUGH: They destroyed the records of, of, of, the, the people who work for the United States government, that was around the guy that was running a fascist takeover of the United States government, to get their text messages, to get the information on the inside. What was going on, while this fascist attempt to overthrow American democracy was playing out . . . This is -- this is just, on its face, it's, it's bad faith. And I can't believe, if they're ignoring a request from Congress, I can't believe, if they're destroying documents, despite what an inspector general is asking, that there aren't criminal charges attached to this.

ELISE JORDAN: Joe, I'm just not going to dismiss [out of] at hand, though, the possibility that the government is just completely broken, and can't do anything right here. You look at just how bumbling an idiot -- you know, this is just idiocracy that a couple of days after something as huge as January 5th, that they go ahead with this planned migration.

And it really just seems like utter stupidity and the incompetence of a government bureaucracy.

MIKA BRZEZINSKI: Where violence was under way.

It's like the days after Pearl Harbor. The people running radar are burning all their documents.

SCARBOROUGH: At the base there. No! Nobody would believe that was a bureaucratic snafu. It was the destruction of documents that could help us better understand what unfolded as a president, who had been defeated at the polls, was attempting a fascist takeover of American democracy.

You know, Mika, I just don't believe it's not malicious. It is malicious. Nobody's that stupid, not even bureaucrats that are the worst of the worst are that stupid. And especially when --

MIKA: I think more will come out.

SCARBOROUGH: Especially when you have books that have been written about how Donald Trump politicized the Secret Service.

Hey Merrick wake up!  Merrick Garland, wake up! Wake up! Hey, Merrick, wake up! Investigate this cover-up! Let me put it in stark terms for you, in case you're afraid to break Marquis of Queensbury rules in boxing.

MIKA: Coming up on Morning Joe, we have much more related to the January 6th investigation, including what we can expect --

MIKA: And doesn't care who loses their job.