If you can get Donald Trump tried by a D.C. jury, anything might be possible—even though charging and convicting Trump of "manslaughter" in respect of January 6th seems like an enormous stretch.

But charging Trump with manslaughter is precisely what Barbara McQuade suggested on Thursday's Morning Joe. McQuade, an MSNBC legal analyst, was an Obama-appointed U.S. Attorney for the Eastern District of Michigan.

"Under federal law, a death, even an unintended death that occurs on federal property, can be charged as a manslaughter. And for someone like a president, who has an affirmative duty to intervene, his failure to call up the National Guard, or, to even go on video, or to tweet that they should stop, could be the kind of omission that could amount to manslaughter."

Failure to tweet in the first degree: book him, Danno!  This isn't legal analysis. It's liberal baying for Trump's blood. 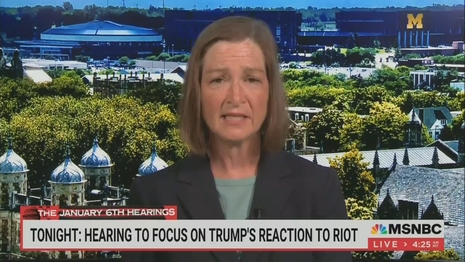 Barb McQuade isn't just pushing this get-Trump angle on MSNBC. She's pushing it on MSNBC.com, she's pushing it on Twitter, and she pushed it on leftist Stephanie Miller's radio show, under the headline "Trump Should be Charged w/ Multiple Counts of Manslaughter."

Meanwhile, who got to Joe Scarborough?

Just yesterday, we noted him angrily lashing out at Attorney General Merrick Garland, screaming at him to charge, convict, and "throw in jail" Trump's "lackeys" in the Secret Service, in connection with the deletion of text messages in the J6 period.

But suddenly today, Scarborough delivered an extended mea culpa for his criticism of Garland, saying DoJ investigations can take time, and shouldn't be rushed. Scarborough claimed that his abrupt change of heart was the result of reading an article by Ben Wittes at Lawfare, defending the Department of Justice's deliberate approach.

In another strange twist, of all the federal investigations that Scarborough might have cited to demonstrate that they can take a long time to complete, he chose that into the activities of Andrew Gillum [although Scarborough was too refined to identify his fellow liberal by name.]  After a multi-year investigation, Gillum was indicted on 21 counts of soliciting improper campaign donations and offering political favors in return for financial support.

Gillum was the Democrat candidate for Governor of Florida in 2018. And who was Gillum's successful opponent in that race? None other than Ron DeSantis, liberal Public Enemy #2 [need we say who's #1?] Just two days ago, we caught Morning Joe branding DeSantis an "evil genius!"

MSNBC legal analyst Barbara McQuade suggesting Donald Trump should be charged for manslaughter was sponsored in part by GlaxoSmithKline, maker of Shingrix, Liberty Mutual, and Angi.

MIKA BRZEZINSKI: The [Washington] Post says the committee plans to drive home a key point: not only did Trump allegedly do nothing to stp the violence, he also sat back and enjoyed watching it . . .  Joining us now, former U.S. Attorney Barbara McQuade. And Barbara, we do want to ask you about the Secret Service situation. But first, give us a preview of what you expect to see tonight, and what you've seen so far.

Does any of it lead to something beyond the hearings?

BARBARA MCQUADE: Yes, so tonight, I think his three hours of inaction is going to very important to the case. Because unlike most of us who have not duty to get involved when there's a crime occurring, average citizens don't, the president does, as the Commander-in-Chief of our armed forces, who has the duty to take care that the laws be faithfully executed, his inaction can actually amount to a crime.

So, if people died because he was failing to exercise due care while he was aware that violence was occurring at the Capitol, that could cause legal liability for him, Mika even beyond what's going on at the committee, at the Department of Justice.

I imagine they're looking at things like conspiracy to defraud the United States, and obstruction of an official proceeding. But this could land evidence to even charges of manslaughter! Under federal law, a death, even an inintended death that occurs on federal property, can be charged as a manslaughter. And for someone like a president, who has an affirmative duty to intervene, his failure to call up the National Guard, or, to even go on video, or to tweet that they should stop, could be the kind of omission that could amount to manslaughter.

JOE SCARBOROUGH: And I must say, yesterday, I was, was quite critical of the Attorney General. And even before I saw this tape, I read an article in Lawfare by Ben Wittes. And by the end of that, I felt badly about, about screaming from the cheap seats about what an Attorney General was doing in a federal investigation . . . Ben Wittes was right yesterday, that people like me should not criticize the Attorney General prematurely. Federal investigations are long, laborious efforts, and given the gravity of the possible prosecution  of a former president,  the, the pros of DoJ and the FBI need to move with great caution, I agree with him, even while they're pursuing justice

So, I mean, it would be, obviously, disturbing, if Merrick Garland were moving too quickly on something as volatile as a possible indictment of a former president.