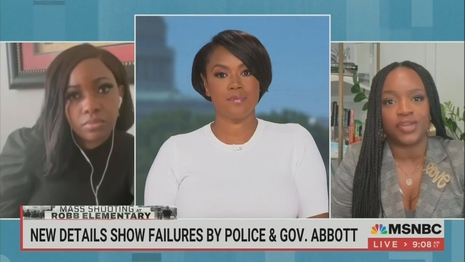 Joe Scarborough really needs to keep an eye on the programming on his own network, MSNBC.

If he did, he'd realize just how absurd was his claim earlier this week that only a "paranoid minority" thinks that there's any danger that guns could be taken away from law-abiding Americans.

Cross concurred on the sermon, telling Crockett that she was "preaching to the choir."

"Pull AR-15s and other similar assault weapons off of the streets . . . We need to remove the tools of violence. That is about removing assault weapons, at the very least."

Okay then! Grabbing "assault weapons" is "the very least" the government should do! Can I keep my cap gun?

But even disarming law-abiding Americans would not be enough for Cunningham. She also advocated "disarming police." And in a flight of true insanity, she said that America needs to "abolish policing as we know it."  She also spoke of straight-up "abolition."

Cunningham and her cohorts have obviously learned nothing from the bitter experience of cities that have reduced funding for the police. Abolishing the police would be the ultimate disaster. And those who would suffer most would be the very "black and brown people" for whom Cunningham expressed concern.

So, Joe Scarborough: The Cross Connection, Saturdays at 10 am. Tune in, and check out the kind of gun confiscation and other leftist lunacy that your network is promoting!

Note: in concurring with Cunningham about police "terrorizing" black and brown people, Cross mentioned a "disturbing video" that the show earlier aired. That was an incident in which during a pursuit of a motorcyclist, a deputy had discharged his stun gun, accidentally setting on fire the biker, who had been soaked in gasoline when his bike overturned. Both the biker and the deputy were subsequently charged.

Tiffany Cross's MSNBC show advocating taking way AR-15s and other assault weapons "at the very least," and disarming police and abolishing policing was we know it, was sponsored in part by Progressive, T-Mobile, Subaru, and 4imprint.

JASMINE CROCKETT: What makes sense is simple gun reform. There is no need for an AR-15, period. Especially in the hands of an 18-year-old. There is no need! We would not have experienced the wine level of carnage as we did, as quickly as we did. And maybe law enforcement wouldn't have been so scared if he did not have an AR-15. So, we need to get real about what the problems are, and we need to start solving them instead of creating more problems.

BRITTANY PACKNETT CUNNINGHAM: Perhaps this is not a gun that should be on the streets. Perhaps the way that we focus laws and legislation in this country can actually go, not only to fund mental health that everyone wants to come to in moments like these, but also go to pull AR-15s and other similar assault weapons off of the streets . . . We need to remove the tools of violence. That is about removing an assault weapons, at the very least. Assault ammunition at the very least.

I also want to say, if these police officers, who were standing outside, and were afraid for their lives, would not go and protect 19 innocent children, a school full of innocent children and teachers. And police officers kill somebody when they are afraid for their lives? Then we need to seriously examine the entire institution of policing. Because, what is the point?

I think we have to reckon with the kind of hero worship that we've engaged in around policing in America. I think, sadly, Uvalde is a terrible and tragic example of just not, not incompetent, but problematic, the entire institution is.

As I said before break, if the police kill, tase, and maim unarmed people because they fear for their lives, and they won't stop armed people from slaughtering children, then clearly the institution itself is not sound.

We have to recognize that there is a culture in media and in television, and in film, that has created this incontrovertible narrative that police are perfect, and they are heroes, and everything they do is done with authority that should be respected without question.

Instead of the fact that we can look at other countries and recognize that at the very least, disarming police, demilitarizing police, but really thinking creatively about how we abolish policing as we know it, and really get to the meat of public safety. That's what our communities deserve. It's not just about what we take away when we talk about abolition -- it's about what we create in terms of creating healthy communities and healthy solutions. But the institution of policing has far too long convinced us that they are here to serve and protect when so often what they're always doing, is actually enforcing the will of the state. And they're terrorizing often black and brown people to do that.

CROSS: Like we just saw on that video, that disturbing video.