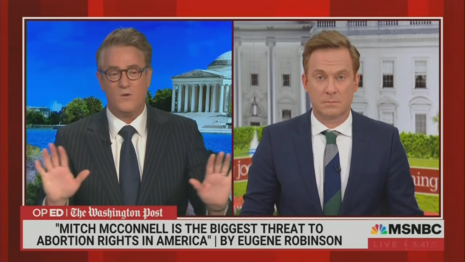 Scaremongering Joe Scarborough started his Morning Joe spiel today by saying people can get "hysterical" when discussing social issues . . . and then proceeded to get hysterical himself, suggesting that Republicans might exploit the Alito opinion to outlaw interracial marriage.

These are the people lecturing us about "misinformation.'

Scarborough repeatedly argued that if the Alito opinion is adopted, it can be used to undo a variety of other Supreme Court rulings. In particular, in addition to rulings striking down restrictions on contraception, and upholding gay marriage, Scarborough thrice cited the case of Loving v. Virginia, in which the Court struck down Virginia's law outlawing interracial marriage.

This despite the fact that Alito's opinion expressly provides:

"Nothing in this opinion should be understood to cast doubt on precedents that do not concern abortion."

It is inconceivable that any state would pass such a law. And surely if one did, it would be struck down by lower federal courts. If it ever did reach the Supreme Court, it is overwhelmingly likely that the Court would affirm the opinion of the lower courts, particularly given the Alito language cited above.

But that didn't stop Scarborough from fear-mongering the issue. What better way to galvanize a key sector of the Democrat base than to raise the specter of the return of a particularly odious form of racial segregation?

MSNBC's Jonathan Lemire agreed with Scarborough, saying there is no reason for anyone to believe the Republicans when they say they would stop with abortion. Then he turned to Washington Post columnist Eugene Robinson: "This could be the thing that maybe changes the conversation heading into this, this November. Democrats facing an uphill climb."

Robinson cast the Alito decision as a "bombshell" that could tilt the midterms, noting that he'd "always been skeptical of all the predictions that Democrats are inevitably in for these huge losses in the fall." Duly noted, Mr. Robinson!

Note: the irony is it's supposed "progressives" who promote racial segregation in everything from school graduations, to campus housing, to special events, even—at my Cornell alma mater—to rock-climbing walls!

Joe Scarborough scaremongering the Alito opinion to suggest that Republicans might use it to outlaw interracial marriage was sponsored in part by Kayak, Clear Choice, and DirecTV.

JOE SCARBOROUGH: You know, Jonathan Lemire, there have been real concerns that this does go beyond abortion. And, often, whenever you're talking about issues, social issues, people can be hysterical on all sides.

So this is a precedent without precedent. Which, of course, makes absolutely no sense. The same logic, that same right to privacy, the same construct that used the 14th amendment to give Roe, to give Griswold, to give Loving these rights, they all come from the same constitutional framework.

So the fact that Alito goes, "oh, don't worry about this. Just trust us. We're only talking about abortion because this has to do with abortion." No. If you, if you pull on that thread on Roe, you're pulling on a thread of Griswold, of Loving, of marriage equality, of all of these rights to privacy that the Court has found over the past 50, 60, 70 years that was contained in the Constitution.

JONATHAN LEMIRE: Yeah. I don't know why any American, or any voter, or any Democrat, should believe them. Why do they think this would stop here? Stop here with this particular decision. Why wouldn't they think it'd be an infringement on other rights, a restriction, a removal of other rights? Why believe it would just stop at abortion?

And Gene, briefly, just, this is such an animating issue, Democrats believe. This could be the thing that maybe changes the conversation heading into this, this November. Democrats facing an uphill climb. What's your early read of the land if Roe v. Wade does, indeed, go away? Is this something that actually, could get Democrats out there and change what we have been led to believe the outcome will be this fall?

EUGENE ROBINSON: Well, it certainly could, Jonathan. I mean, look, it's very difficult to make predictions about American politics these days, which way things will go. I have always been skeptical of all the predictions that Democrats are inevitably in for these huge losses in the fall.

Because, you know, if a week is an eternity in politics—that's what we used to say 20 years ago. Now, it's, you know, a week is how many eternities? I mean, things change so rapidly. But I think this is, this is a bombshell. It really is.