What, no leg shackles?

There was tough talk from the Morning Joe crowd today regarding measures to force Republicans to testify before the tilted (and now jilted) January 6th committee.

"MSNBC Republican" Elise Jordan kicked things off, saying the committee should act as "harshly" as Republicans would if they were in charge. She surmised that the sergeant-at-arms might be in a position to hold witnesses in contempt and force them to come to the Capitol. 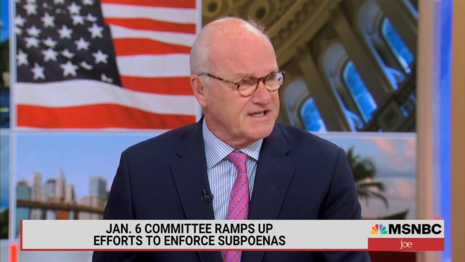 "There'll be no action on this until we see someone like Steve Bannon—in handcuffs—brought to the Capitol and forced to testify under oath. Period!"

No one brought Barnicle into the room in handcuffs for blatant plagiarism. Anyway, Mika Brzezinski and Joe Scarborough promptly seconded Barnicle's call for Bannon in Chains.

Mika: "This is not the time to be weak. If that's an option that could happen, let it be. Let it happen."

Scarborough: "If [the subpoenas] are enforceable, enforce your damn subpoenas!"

As for Jordan's call for Democrats to act as "harshly" as Republicans would, let's recall the case of Lois Lerner. She's the former IRS official who was accused of singling out conservative organizations to deny them tax-exempt status. She refused to testify before a Republican-led congressionial committee. And whereas she was held in contempt, she was not prosecuted . . . and we don't seem to remember Barnicle calling for Lerner to be slapped in handcuffs!

Note also Jordan lamenting the protections of due process for Republicans. She said it was "unfortunate" that Democrats can't go "boom, boom, boom" and immediately force the Republicans to testify.

Some seasoned veterans of cable-news bias recall CNN's Jack Cafferty wisecracking in 2005: "What should Karl Rove do if he is indicted?...He might want to, he might want to get measured for one of those extra large orange jump suits, Wolf, because looking at old Karl, I’m not sure that he’d, they’d be able to zip him into the regular-size one."

When it comes to lurid liberal fantasies about Republicans being given harsh treatment, it would be hard to top MSNBC's Tiffany Cross. We caught her last year fantasizing about President Trump being:

"Dragged out on the White House lawn like a 1980s episode of Cops."

MSNBC subsequently rewarded Cross with her own show.

Morning Joe calling for Steve Bannon to be put in handcuffs and forced to testify before the January 6th committee was sponsored in part by TD Ameritrade, Amazon, and Liberty Mutual.

MIKA BRZEZINSKI: The House select committee investigating the January 6th attack of the Capitol is ramping up efforts to force former Trump administration officials to cooperate with its probe.

WILLIE GEIST: In a letter from his attorney to the committee, former White House senior adviser Steve Bannon announced his intention not to appear today, citing former President Trump’s claim of executive privilege . . . Members of the select committee say they are prepared to pursue criminal charges against witnesses who do not appear for their subpoenaed deposition testimony this week.

So, Elise, we've had members of the select committe on this show the last two days, both of whom have said, okay, if you don't show up, these are subpoenas, we will just refer you for criminal prosecution. If it means you go to jail, you go to jail.

ELISE JORDAN: It’s going to take a long time, though. That's what's unfortunate. They can’t boom, boom, boom, make it happen and force people into compliance so we can get the truth, get to the bottom of what actually happened on January 6th. That's why I still maintain it was a big mistake for the second impeachment to not have that testimony right after the horror of January 6th, and just to get it out there.

But, going forward, I really wonder what they can do to toughen this up. I believe that the sergeant at arms, if ordered, could call these people into contempt and order them to come to the Capitol. I am not sure exactly how it would work. That’s something for legal scholars who are way above my pay grade. But I think they should use every tool in their arsenal and attack this as harshly as Republicans would do if they were in a similar position.

MIKA BARNICLE: You are absolutely correct. They have the power, and I'm tired of the select members of the committee coming on here, they mean well, I know that. They talk and talk and talk, and there's no action.

And there'll be no action on this until we see someone like Steve Bannon, in handcuffs, brought to the Capitol and forced to testify under oath. Period!

MIKA BRZEZINSKI: I think, I mean, this is not the time to be weak. It’s just not. I mean, at some point the line has to be drawn as to what is right or wrong in this country. And I would not be weak about it. If that's an option that could happen, let it be. Let it happen. Don’t be weak.