Morning Joe: Milley Tipping China Sounds Great— Except It Collides with the Constitution

General Milley promising to tip off China to any attack ordered by President Trump? Why, that's "helpful." Milley "didn't do anything wrong." In fact, "we owe him a debt of thanks!"

The only "problem?" That Constitution thingy!

On today's Morning Joe, everyone from Joe Scarborough to Jonathan Lemire to David Ignatius did his bit to downplay the seriousness of Milley's dereliction of duty.

Outrageously, Morning Joe once again suppressed any mention of Milley's key offense: his promise to China to give advance notice of an attack. Joe Scarborough dishonestly described Milley as merely having "talk[ed] to his counterparts."

And Scarborough teed up Washington Post columnist and Morning Joe regular David Ignatius to discuss his column in which he suggested that focusing on Milley is "missing the bigger point."  Right! Let's ignore the Chairman of the Joint Chiefs of Staff going behind the back of the President of the United States and promising to warn our biggest adversary of a coming attack. Instead, let's focus on what's really important: Orange Man Bad!

But at the end, Ignatius had to acknowledge the small matter of the Constitution, calling it a "problem." 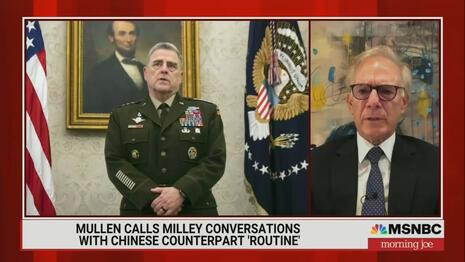 "The problem is, and I think every single thing that was done by those three people, by Milley, were helpful for the country and our security.

But, under our Constitution, these people didn’t have authority to set their own policy. We have a strong executive branch under the Constitution. We have a Commander-in-Chief, and you don’t set up an alternative policy."

It was very telling for Ignatius to then say that if generals pulled something similar with Biden, "people" would be offended.

Guess what? Many "people" are offended—and much more than offended—by how Milley undermined the Constitution and President Trump.  But Ignatius naturally sees the world from the viewpoint of the bien-pensant liberal establishment.  It's only offensive if it's done to a Democrat!

And there was something ominous about Ignatius's final words, about the situation being something we need to think about "for the future." Was he suggesting some kind of constitutional change to permit what would otherwise be Milley's dereliction of duty or something even worse? Or was he merely suggesting that generals don't need to contradict the president or warn about the president once Biden's in office?

Morning Joe downplaying the seriousness of General Milley promising China he would tip it off if President Trump ordered an attack was sponsored in part by AT&T.

JONATHAN LEMIRE: These are routine—routine may be a bit much. But these are not out-of-the-ordinary conversations for U.S. officials to have with their counterparts particularly, a rival like China. But certainly it does show concern as to where things were going nine months ago.

JOE SCARBOROUGH: It does. But I mean, to act like this is some extraordinary moment, for an American general talking his counterparts, or for CIA directors or for Secretary of States, to make sure that things are calm on the other side, that happens an awful lot. David Ignatius, in a column you write on this, you say, we seem to be missing the bigger point by just focusing on General Milley.

DAVID IGNATIUS: This question of the larger group within the Trump administration who were quietly and visibly, really, setting guardrails against erratic, dangerous actions by President Trump. I think this remains the real, untold stories of the last couple months of the administration. But by my reporting, Secretary of State Mike Pompeo, until he left Attorney General William Barr, certainly CIA director Gina Haspel, were taking steps to make sure that the president didn’t do things that would destabilize the country, that would put us in dangerous situations.

The problem is and I think every single thing that was done by those three people, by Milley, were helpful for the country and our security.

But, under our Constitution, these people didn’t have authority to set their own policy. We have a strong executive branch under the Constitution. We have a Commander-in-Chief. And you don’t set up an alternative policy.

If you can imagine generals trying to decide, well, we know more than, general, President Biden. We're going to set guardrails for President Biden. People would be offended. So I think there is a real constitutional issue here.

I don't think Milley did anything wrong. I think we owe him a debt of thanks. But there's something worth thinking about here for the future.