MSNBC Contributor: I Have to Wipe 'Stink' of Tucker Carlson Out of Air

Back in 2006, when Venezuela's communist dictator Hugo Chavez took the UN podium, he claimed, in an allusion to the Devil, to still smell the "sulphur" from the previous day, when then-President George W. Bush had spoken.

In a reprise of Chavez's clownish act, MSNBC contributor Fernand Amandi, after viewing a Tucker Carlson clip that Tiffany Cross ran on her MSNBC show this morning, dramatically waved his hand in the air, claiming he had to "wipe the stink off of that, because that polluting, racist talk is just stinking it up here in the Amandi household."

Is Amandi perhaps an admirer of the late Chavez, the dictator who drove oil-rich Venezuela to ruin?

Cross concocted her own way of dissing Carlson. Rather than calling Tucker by name, Cross twice referred to him as "Tuckums." Mature stuff!

A bit earlier, Cross reserved a much more respectful moniker for Michelle Obama, calling her the "Forever FLOTUS" [video at tweet.] Wonder what "Dr. Jill" thinks about that?

Note: What drove Cross and Amandi to complain of Carlson's "stink" and "insanity" was his statement that the Democrat party is seeking to replace the current US electorate with more Dem-friendly immigrant voters from Third World countries. Question: how hard do you think Biden-Kamala would be clamping down on the border if, say, millions of Republican-leaning Poles were trying to enter the country? 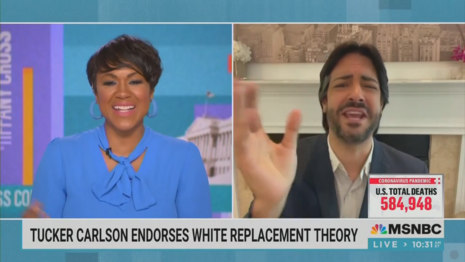 TIFFANY CROSS: I want you to take a listen, because the people to the right of us have been warning about this white-replacement theory. Take a listen to Tuckums, from his warning to his viewers.

TUCKER CARLSON: Now I know that the left, and all the littler gate-keepers on Twitter, become literally hysterical if you use the term replacement, if you suggest that the Democratic party is trying to replace the current electorate—the voters now casting ballots—with new people, more obedient voters from the Third World. But they become hysterical, because that’s, that's what’s happening, actually. Let’s just say it, that’s true.

CROSS: Let’s just say it: Tuckums is crazy. He’s obviously wrong. But Fernand, what’s your response to that?

FERNAND AMANDI: [vigorously waving hand in the air] Let me wipe the stink off of that. Because that polluting, racist talk is just stinking it up here in the Amandi household.

CROSS: It's all insanity. It's insanity.