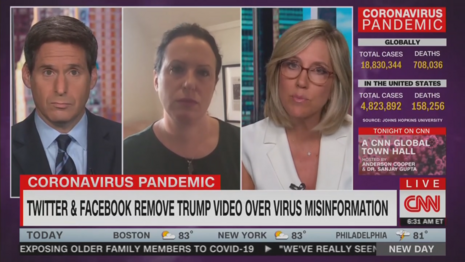 Imagine an angry President Trump asking a black journalist if he's a "junkie." Now imagine the liberal media's Breaking News, 24/7 coverage of the incident, complete with calls for his resignation, cries about racist stereotyping, etc. Who knows: the MSM might even have managed to spark a new round of riots.

But it wasn't President Trump who had made the insulting suggestion. Rather, an angry Joe Biden yesterday asked a black journalist if he were a "junkie," after imagining him being subjected to a test for "cocaine." So, naturally, the opening hour of MSNBC's Morning Joe, and CNN's New Day . . . made absolutely no mention of the incident.

The journalist in question was Errol Barnett of CBS, who interviewed Biden during a virtual convention of the National Association of Black Journalists and the National Association of Hispanic Journalists. What set Biden off was Barnett's question as to whether Biden had taken a "cognitive test." Biden twice sprinkled his trademark "c'mon man" into the confrontation.

Rather than reporting Biden's "are you a junkie?" blast, New Day and Morning Joe tried to flip the script on mental acuity. CNN brought on Maggie Haberman of the New York Times/CNN to agree with New Day host Alisyn Camerota's suggestion that Trump can't "intellectually grasp" his briefings on the coronavirus.

For its part, Morning Joe ran a montage, taken from Trevor Noah's Daily Show, of some Trump verbal stumbles, juxtaposed with comments from conservatives questioning Biden's brain. Scarborough pretended that the conservatives had actually been aiming their barbs at the president.

Note that Barnett is anything but a Trump acolyte. It was Barnett whom the Secret Service accosted when he aggressively tried to question Jared Kushner regarding the death of Jamal Khashoggi.

Morning Joe's clip of Trump stumbles was sponsored in part by Choice Hotels. CNN suggesting President Trump is unable to "intellectually grasp" briefings was sponsored by Amgen, maker of Enbrel.

Here are the transcripts. Click "expand" to read more.

ALISYN CAMEROTA: We have been just watching in extreme fashion the president spinning the coronavirus to seem much more positive, much more rosy a picture than what medical experts tell us. And is that, Maggie, just his style? Is it, as CNN reported yesterday, that he doesn’t sort of intellectually grasp when he’s briefed how bad the death toll is? Is this just his ongoing state of denial? What’s going on there?

MAGGIE HABERMAN: I have reporting, Alisyn, that is similar, that this is something that he intellectually doesn’t get.

ERIC TRUMP: There's something off there, and how many gaffes can you make every single day?

PRESIDENT TRUMP: This is the very definition of — totallyterritism.

JONAH GOLDBERG: He increasingly sounds like one of those bad lip-reading videos you see on the internet.

PRESIDENT TRUMP: They delivered a swift and swip — it was swift and it was sweeping.

MATT SCHLAPP: We find that he has troubles getting through the words.

FOX NEWS HOST: He doesn’t even know what year it is.

GERALDO RIVERA: He has difficulty keeping his train of thought.

PRESIDENT TRUMP: The blazing fast broadwalk. And if you think I am announcing my administrayshzzizt.

SCHLAPP: He’s on an obstacle course that makes it look like he is just not up to this job.