The opening of today's Morning Joe served up a double-barreled surprise. First, rather than beginning with Michael Cohen's congressional testimony yesterday, the show began with a discussion of President Trump's Hanoi summit with Kim Jong Un, in which the President walked away without signing an agreement.

The second surprise: rather than trashing Trump for a failed summit, etc., Joe Scarborough and David Ignatius of The Washington Post actually praised the President. Scarborough said that Trump achieved "the best of all circumstances." Ignatius agreed, adding, "as President Trump said, 'sometimes you have to walk.'"

Perhaps Scarborough and Ignatius had in mind the Reykjavík Summit and its aftermath. When President Reagan walked away without an agreement, he was widely blasted on the left. Take, for example, Rolling Stone, which mocked Reagan thusly:

"When he emerged from his bargaining sessions with Mikhail Gorbachev, the president looked stung, like a small boy who had burned his fingers playing with a light socket. Reagan came home empty-handed from Iceland, and for once he was wearing the black hat — the man who said no to a historic opportunity."

In fact, it was Reagan's steadfastness in refusing to sign onto a bad agreement that subsequently led to the successful IMF Treaty. We'll see how things play out with the NORKS, but kudos to Scarborough and Ignatius for acknowledging Trump's guts and good sense in walking away from a bad deal.

There was yet another surprise when talk turned to the Cohen testimony. Willie Geist asked Joyce Vance, a former U.S. Attorney appointed by President Obama, what new information Cohen brought to the table in his testimony. Responded Vance: "certainly nothing that was new to prosecutors: I think it's important to say that." Swing and a miss by the Dem-controlled committee? How is it "news" then? Anything that makes Trump look bad is "news."\

And finally, Donny Deutsch introduced some unintentional humor into the proceedings. Deutsch has described Michael Cohen as a good friend. Asked by Scarborough about his personal feelings over the Cohen testimony, Donny answered: "obviously I've been a stench defender," before correcting himself: "staunch" defender. That hanging curveball was too much for John Heilemann to resist: "yes, stench: I'm sitting right next to him." As you'll see from the screencap below, a good laugh was had by all—at Donny's expense. 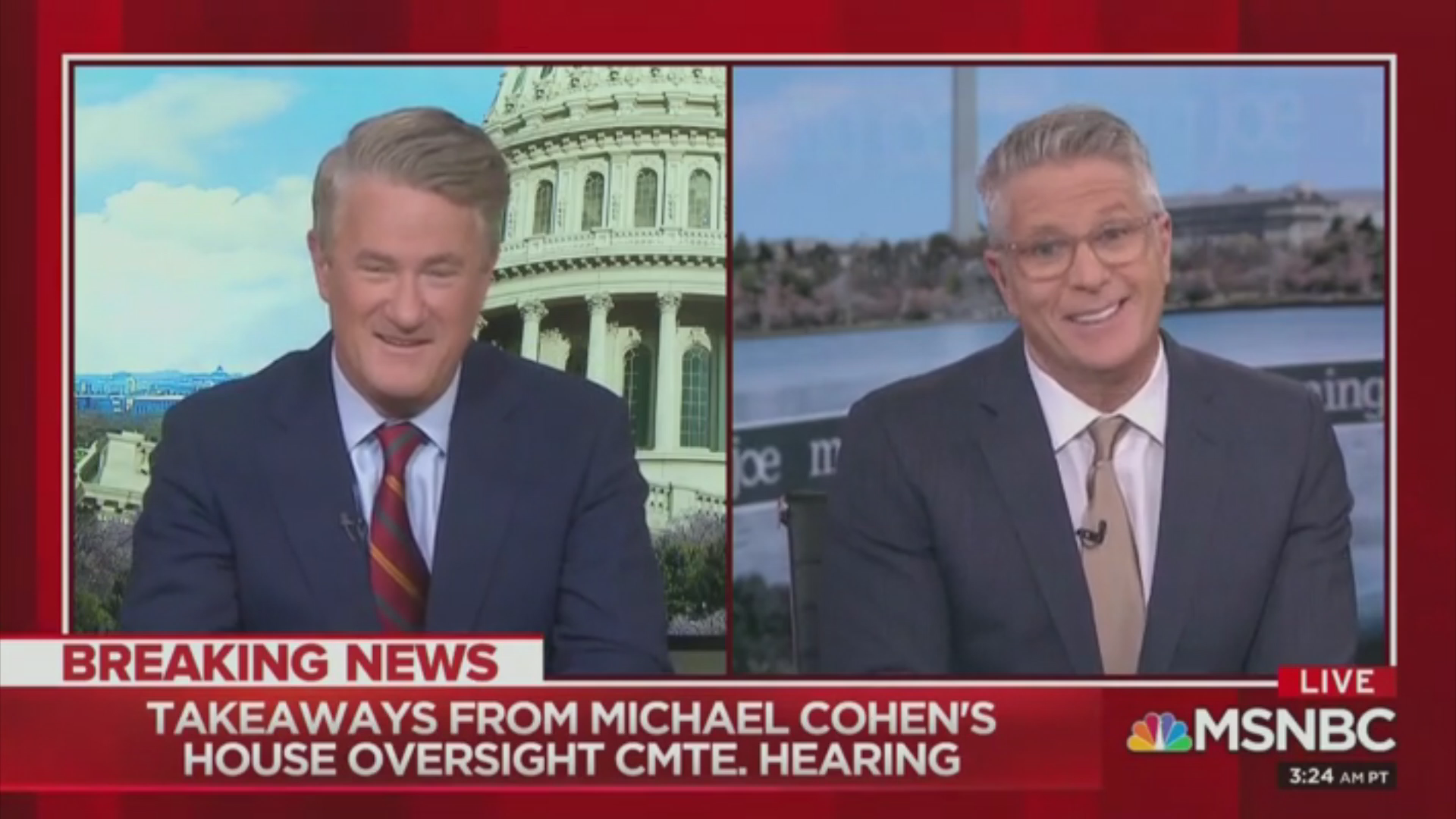 JOE SCARBOROUGH: I would just say, at least for me personally, that seems like the best of all circumstances, where the President continues to communicate with a country that we were close to war with a year ago, that most foreign policy experts gave us a 50/50 chance of having a land war in the Korean peninsula a year ago. And talked but didn't give away anything, which was the great fear, especially after the Cohen testimony yesterday, which we're going to get to in one moment.

DAVID IGNATIUS: Joe, I agree with you. I think as President Trump said, sometimes you have to walk.

WILLIE GEIST: What new information do you think Michael Cohen brought to the table yesterday that could be a problem for Donald Trump, above and beyond what we already knew?

JOYCE VANCE: So certainly nothing that was new to prosecutors. I think it's important to say that.

SCARBOROUGH: Donny Deutsch, what were your personal feelings about your long-time friend, and by the way, a guy who was still your friend when he was working for Donald Trump?

JOHN HEILEMANN: Yes: a stench, I'm sitting right next to him.

DEUTSCH: Most of the time I do have stench.