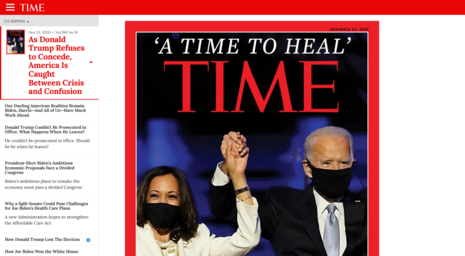 Shortly after being fired from MSNBC as a paid contributor after he failed to disclose that he had been writing speeches for Joe Biden, on Thursday, ex-Newsweek editor and left-wing “historian” Jon Meacham turned to the pages of Time magazine to boost his Democratic Party boss. In the puff piece, he finally publicly admitted: “I helped contribute to a few of his major speeches about ‘the soul of America’...”

The sycophantic Meacham compared Biden to Franklin Roosevelt and hailed him as “One of those forward-looking Americans.” A few paragraphs in, he claimed complete transparency about his support for – and work on behalf of – Biden:

My views on President-elect Biden are no secret. I am a friend of his; he and I have long been in conversation about history and what the American past can tell us about the American future. In March, I endorsed him for President in print, and I spoke at the Democratic National Convention this year. And as a historian and professor, I helped contribute to a few of his major speeches about “the soul of America,” which was the title of a book I published in 2018. My view is that studying and commenting on history and historical events doesn’t mean you’re removed from them.

Of course him being a Biden speechwriter apparently was a secret to his former MSNBC employers.

Playing his role as a Biden PR flack perfectly, Meacham laughably assured readers: “From my time with Biden, I can tell you this: by experience and by disposition, the President-elect is hardly a polarizing figure.” He then touted of his buddy: “His decades in the Senate and his eight years as Vice President have given him the political virtues of empathy (of seeing why the other side feels the way it does) and of pragmatism (of trying to give the other side a face-saving way to compromise).”

Meacham predicted: “That empathetic pragmatism—or pragmatic empathy, take your pick—might be the greatest attribute he will bring to the Oval Office.”

As he wrapped up the fawning propaganda, Meacham implored Americans to do their part and be willing to “sacrifice some of our interests” in order to help Biden succeed:

Much of the fate of the next four years will be as much on us as on him. The constitutional order depends on the character of the leaders and of the led. It depends too on enough of us believing in the experiment in liberty enough that we’re willing to sacrifice some of our interests in order to maintain an arena in which all of our interests can contend for temporary dominion.

Americans must be able to match that character of a man implicated in corruption scandals and sexual assault allegations.

At least Meacham is now being honest about being a pro-Biden hack.