Stephanopoulos Asks Comey if Trump Should Be Impeached

In a salacious promo for the network’s exclusive Sunday night interview with former FBI Director James Comey, during Wednesday’s Good Morning America, ABC featured clips of anchor George Stephanopoulos touting Comey’s comparison of President Trump to a “mob boss” and asking the fired Bureau chief if the President should be impeached.

“How strange is it for you to sit here and compare the President to a mob boss?,” Stephanopoulos asked Comey as the ad began. The next softball question to be highlighted: “Are there things that you know but haven’t said that could damage President Trump?” As the promo concluded, the former Bill Clinton political operative urged Comey to endorse the impeachment of Trump: “Was President Trump obstructing justice? Should Donald Trump be impeached?”

A single question included in the commercial dealt with Comey’s handling of the Hillary Clinton e-mail investigation, as Stephanopoulos wondered: “And to those who say you should have brought Hillary Clinton before a grand jury?”

In a breathless write-up of the exchange that has yet to air, Axios proclaimed: “A source present at the taping says James Comey’s interview with ABC’s George Stephanopoulos, airing Sunday at 10 p.m. as a ‘20/20' special, is ‘going to shock the president and his team.’”

The hype continued as the article promised:

The source said Comey’s comments, in his first interview since being fired by President Trump last May, will generate headlines and “certainly add more meat to the charges swirling around Trump.” According to the source: The Comey interview left people in the room stunned....Some described the experience as surreal....If anyone wonders if Comey will go there, he goes there.

If there was any question about ABC’s intention in securing this interview, the picture is becoming clear: a softball prime time forum for Comey to hawk his new book and trash the President.

Here is a transcript of the brief promo aired during the April 11 GMA:

GEORGE STEPHANOPOULOS: How strange is it for you to sit here and compare the President to a mob boss?

ANNOUNCER: This Sunday night on ABC. 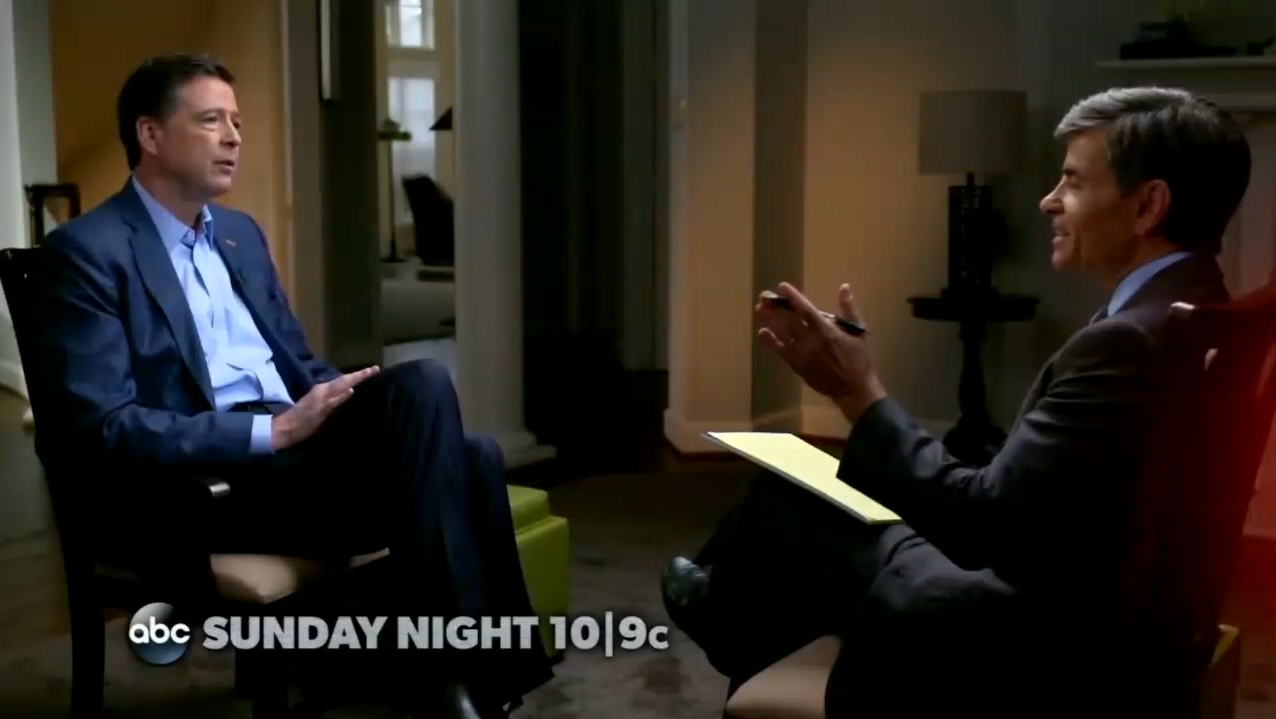 STEPHANOPOULOS: Are there things that you know but haven’t said that could damage President Trump?

STEPHANOPOULOS: And to those who say you should have brought Hillary Clinton before a grand jury?

ANNOUNCER: The exclusive interview everyone will be talking about.

ANNOUNCER: Stephanopoulos, Comey, this Sunday night at a special time, 10/9 Central on ABC.