Just like clockwork Monday morning, all three network morning shows had a collective freak out over President Trump tweeting out over the weekend a doctored clip of him wrestling “CNN” to ground created out of an old WWE appearance he did years ago. Anchors and correspondents were indignant as they breathlessly hyped the social media controversy. Only CBC bothered to mention the context of the President’s criticism of the cable channel.

At the top of NBC’s Today, fill-in co-host Craig Melvin proclaimed: “Twitter Smackdown. President Trump under fire for another tweet going after the media. Sharing this video, slamming CNN.” In a report minutes later, correspondent Hallie Jackson declared: “This morning, a fake fight with what the President calls a fake news network generating real controversy for the commander-in-chief.”

Jackson then touted: “A spokesperson for the cable network saying, ‘It is a sad day when the President of the United States encourages violence against reporters’...”

This is really his favorite Twitter activity, media criticism. And it’s a great punching bag for him, the media’s approval rating is hovering below his, so this is a battle that – this is a fight he wants to pick....he’s not that engaged on policy, he would rather be engaging in media spats on Twitter.

It should be noted that Jordan recently compared the President to a “suicide bomber,” so perhaps she’s not the best person for NBC to turn to when fretting over heated rhetoric.

Leading off ABC’s Good Morning America, fill-in co-host Amy Robach feared: “President Trump doubles down on his attack on the media, tweeting this WWE clip. Outrage from members of his own party, saying he’s demeaning the office of the presidency. Others saying it could incite violence.”

One those supposed “Republicans” who was cited by correspondent David Kerley in the later report was political strategist Ana Navarro decrying: “The President of the United States is inciting violence against the free press.” The reporter forgot to mention that Navarro endorsed and voted for Hillary Clinton in the 2016 election.

He went on to announce: “Elected Republicans quickly denouncing the President’s attack on journalists and the First Amendment.”

Like his NBC colleague, Kerley also cited how “CNN, the subject of the altered video, said in a statement the President is involved in, quote, ‘juvenile behavior far below the dignity of his office.’”

Joining NBC and ABC, CBS This Morning began with fill-in co-host Reena Ninan sensationalizing: “President Trump tweets a video of him literally bashing the media...” “Mr. Trump spent much of the weekend lashing out at the media, including a tweeted video that outraged many of his critics,” she added while introducing a report on the topic minutes later.

Correspondent Chip Reid highlighted: “In response, CNN called it ‘a sad day when the President of the United States encourages violence against reporters. He is involved in juvenile behavior, far below the dignity of his office.’”

However, to his credit, Reid did something that his fellow journalists did not do, he actually noted CNN’s recent retraction of a story that turned out to be fake news: “The President ramped up his feud against CNN after a couple of major mistakes by the network last week, including a story about Mr. Trump that was later retracted, causing three reporters to resign.”

The biased reporting across the broadcast networks was brought to viewers by State Farm, Febreeze, and JC Penny.

Here are excerpts of the hyperbolic coverage on all three July 3 morning shows: 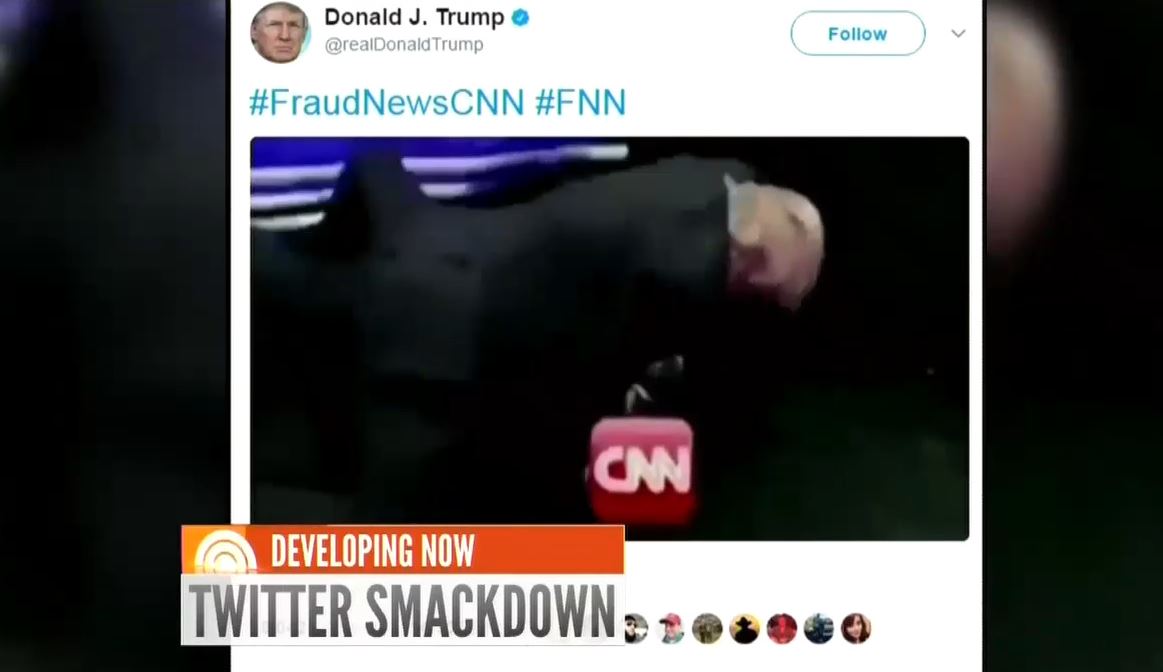 CRAIG MELVIN: President Trump setting off some fireworks of his own this Fourth of July weekend. On Sunday, the President posted this video to his Twitter account that shows him wrestling a figure with the CNN logo on it. He’s been ramping up his attacks against the media in recent days. And that’s not all, still insisting his November victory was tarnished by voter fraud, the President also took aim at some states that are refusing to hand over their voter roles. We’ve got it all covered this morning, beginning with NBC’s Chief White House Correspondent Hallie Jackson. Hallie, good morning.

HALLIE JACKSON: Hey, there, Craig, good morning to you. And while it’s pretty quiet here at the White House today, not so much on Twitter, where Donald Trump is decrying coverage of his presidency. His advisers insisting they’d all rather be talking policy one day after that clip of the President slamming a cable network, literally.

This morning, a fake fight with what the President calls a fake news network generating real controversy for the commander-in-chief.

THOMAS BOSSERT [WHITE HOUSE HOMELAND SECURITY ADVISER]: I think that no one would perceive that as a threat. I hope they don’t. But I do think that he’s been beaten up in a way on cable platforms that he has a right to respond to.

JACKSON: The throwdown shown here, a throw back to Donald Trump’s WWE cameo, modified now to show a CNN graphic instead. A spokesperson for the cable network saying, “It is a sad day when the President of the United States encourages violence against reporters,” citing this comment from the President’s deputy press secretary just last week.

SARAH HUCKABEE SANDERS: The President in no way, form, or fashion has ever promoted or encouraged violence. If anything, quite the contrary.

JACKSON: The wrestling video appeared to originate on the online forum Reddit, where the President’s supporters cheered the clip’s new notoriety. 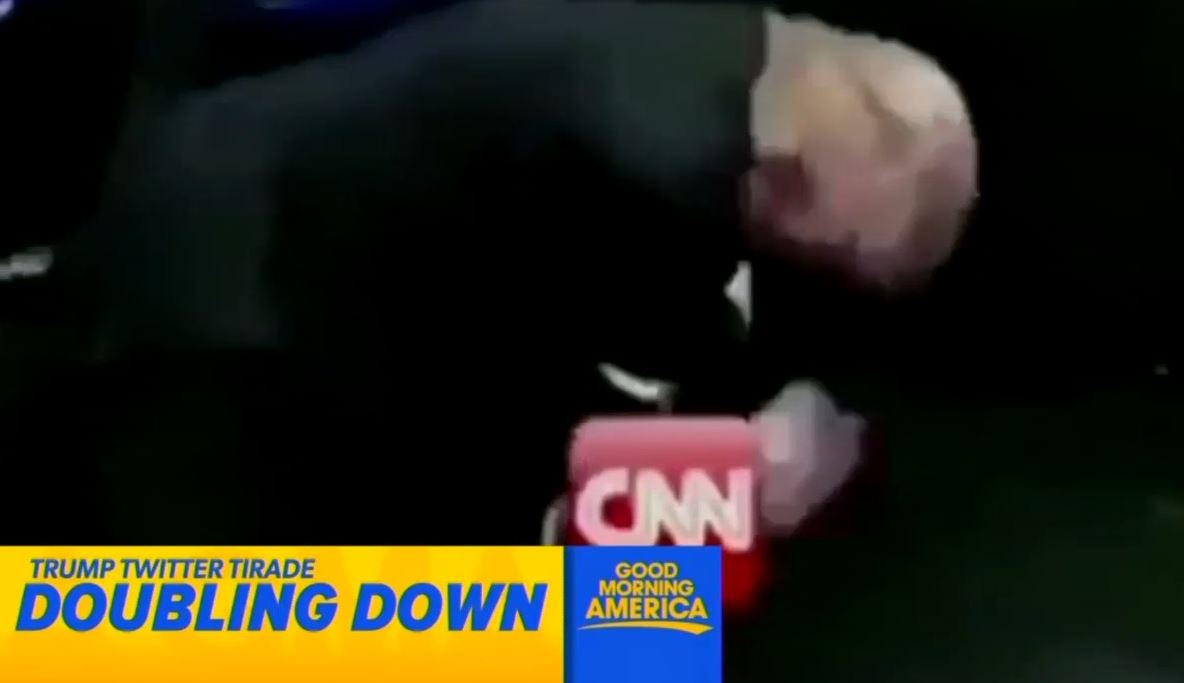 AMY ROBACH: And we begin this morning with the President pouncing on the media. President Trump tweeting out this video over the weekend showing him in an old WWE clip, but in this version, you can see he is body slamming CNN. ABC’s David Kerley at the White House with much more on that. Good morning, David.

DAVID KERLEY: Good morning, Amy. This morning the President is being roundly criticized in a bipartisan manner for that tweet and the video amping up his battle with the media. And all this going on as his Republican colleagues are trying to change health care and sell it back home.

KERLEY: The official presidential tweet is an old wrestling video takedown with businessman Trump. Doctored with the CNN logo covering the face of his victim. One face of the media pummeled in the world of fake wrestling. Outrage even from Republicans immediately.

ANA NAVARRO: The President of the United States is inciting violence against the free press.

KERLEY: But the President defended by his Homeland Security adviser who saw this for the first time on This Week.

MARTHA RADDATZ: You’re in charge of Homeland Security there. That seems like a threat.

THOMAS BOSSERT: Yeah, certainly not, though. I think that no one would perceive that as a threat. I hope they don’t.

SEN. BEN SASSE [R-NE]: This is the Fourth of July weekend. The Declaration of Independence is pretty dang clear about this.

GOV. JOHN KASICH: It’s ridiculous, right? Everybody is kind of flabbergasted. You know, he ought to stop doing it. 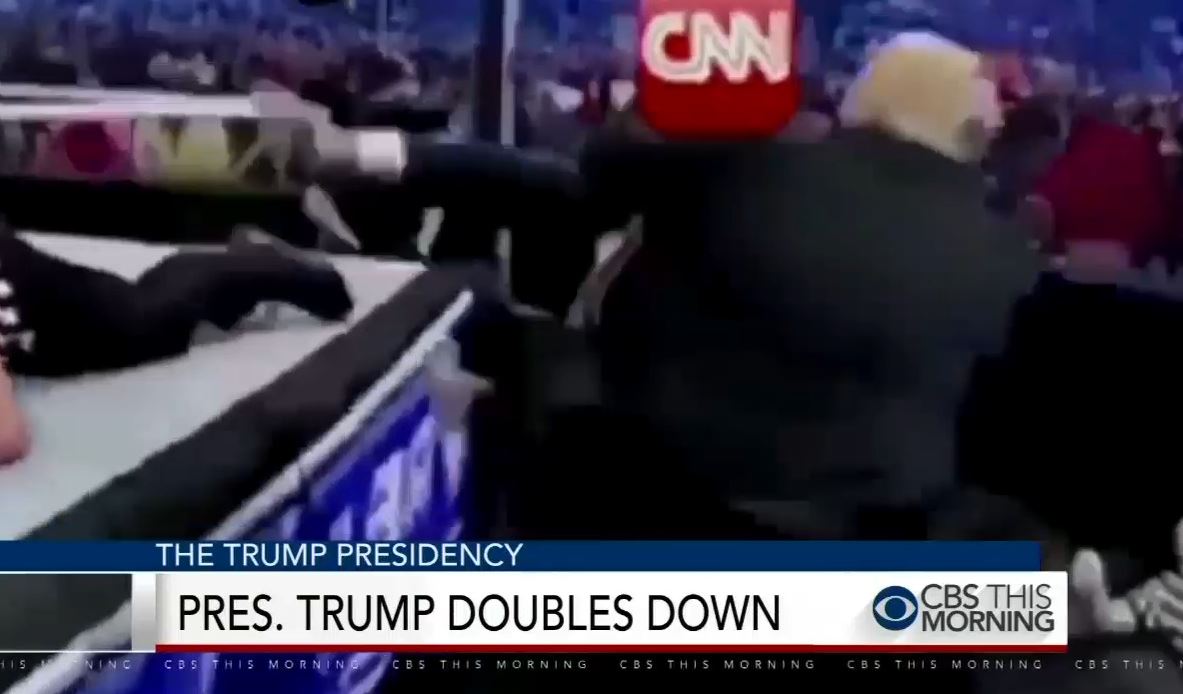 REENA NINAN: Mr. Trump spent much of the weekend lashing out at the media, including a tweeted video that outraged many of his critics. Chip Reid is at the White House, where the President’s advisers are defending his message. Chip, good morning.

CHIP REID: Well, good morning. The President’s latest controversial tweet comes a day after he proclaimed on Twitter that, “My use of social media is not presidential. It’s modern day presidential.” So welcome to the modern age.

DONALD TRUMP [SATURDAY]: The fake media is trying to silence us, but we will not let them.

REID: President Trump kept the focus on his favorite target over the weekend, the media.

TRUMP: The fake media tried to stop us from going to the White House, but I’m president and they’re not.

REID: Sunday morning the President posted a video on Twitter showing him bashing the CNN logo. Originally from 2007, the video shows then-citizen Trump attacking a wrestling executive. It’s unclear who made the new version, it was first posted on Reddit five days ago by a user who’s past postings have threatened violence against Muslims. In response, CNN called it “a sad day when the President of the United States encourages violence against reporters. He is involved in juvenile behavior, far below the dignity of his office.”

REID: The President ramped up his feud against CNN after a couple of major mistakes by the network last week, including a story about Mr. Trump that was later retracted, causing three reporters to resign.