On Tuesday, while all three network morning shows covered the newly-released House Benghazi Committee report, the broadcasts also dutifully parroted Democratic talking points attacking the credibility of the findings and concluded: “It does not appear to uncover conclusive evidence of wrongdoing by Hillary Clinton.”

At the top of CBS This Morning, co-host Norah O’Donnell proclaimed: “Republicans today will release the results of a highly contentious two-year investigation into the deadly Benghazi attack.” Minutes later, fellow co-host Gayle King labeled the report “politically explosive.” In the report that followed, correspondent Margaret Brennan lamented that “the four Americans killed in the Benghazi attacks” were “now political fodder for Democrats who support Hillary Clinton and Republicans who accuse her of stonewalling.”

While characterizing the findings “as a slam of the State Department for ignoring subpoenas, stonewalling, and withholding information about the deaths of four Americans,” Brennan hastened to add: “It does not appear to uncover conclusive evidence of wrongdoing by Hillary Clinton.”

She fretted: “Yet that hasn't stopped presumptive Republican nominee Donald Trump from blaming her.”

Brennan wrapped up the segment: “Democrats tried to defuse the attack by issuing their own politically-charged 339-page report. It accuses Republicans, particularly Donald Trump, who is mentioned 12 times, of conspiring to damage Clinton's presidential bid.”

At the top of the 8 a.m. ET hour, King repeated the liberal spin: “The more than two-year investigation does not appear to uncover any conclusive evidence of wrongdoing by then-Secretary of State Hillary Clinton. Democrats on the committee yesterday released their own report, it accuses Republicans of conspiring to damage Clinton's presidential bid.”

On ABC’s Good Morning America, correspondent Martha Raddatz explained that the report was “Strongly critical of all government agencies and the coordination between them....[and] refutes some findings of previous investigations and focuses on the fact that the administration initially blamed the attack on an anti-Muslim video.”

However, she ended on this note: “The Democrats who weren't allowed to co-author this report issued their own findings yesterday. A 339-page report they say clears Clinton of any wrongdoing and, quote, ‘debunks in conspiracy theories of the attack.’”

Co-host George Stephanopoulos wondered: “In those 800 pages [of the Republican report], is there a smoking gun?” Raddatz replied: “Well, it’s a very broad report. But it certainly looks very closely at Secretary Clinton's role. Of course, there have been 12 other investigations. This one does have new details and analysis. But the report does not appear to have any smoking gun.”

The section of the 800-page Republican report obtained by NBC News sheds new light on the breakdown of the military response to the Benghazi attacks and the failure to have an evacuation plan. Among the revelations, the report says 35 Americans were saved not by local militias the U.S. thought were allies but fled, but by “former military officers” from Moammar Gadhafi's regime, the Libyan dictator whom the U.S. helped topple just one year before....

A major focus of the report is the military’s failure to carry out orders from Defense Secretary Leon Panetta to deploy forces to Benghazi. And a force didn't get to Tripoli until the next afternoon, partly because of a previously reported failure to have airplanes ready, but also because of conflicting orders from State Department and Pentagon officials over whether Marines should wear military uniforms or civilian attire because of diplomatic sensitivities with the Libyans. The report says one commander told the committee, “During the course of three hours” waiting on the plane, “he and Marines changed in and out of uniforms four times.”

Then, like her media colleagues, she turned to Democratic talking points:

Democrats arguing, “The U.S. military could not have done anything differently on the night of the attacks that would have saved the lives of the four brave Americans killed in Benghazi.” The Democratic report acknowledges “security measures in Benghazi were woefully inadequate,” but blasts the Republicans’ report as, “A case study in how not to conduct a credible investigation.” Wasting, it says, more than $7 million of taxpayer money.

Today, the Clinton campaign continues to attack the committee’s credibility, calling it a “partisan sham since its start.” The highest ranking Democrat on the Benghazi Committee tells NBC News this morning Republicans didn't want them to check the report against the evidence that they had obtained.

So if you look at polls just out this week, Hillary Clinton lags Donald Trump on the question of honest and trustworthy. And don’t take my word for it, listen to Hillary Clinton on the stump yesterday, where she gave a pretty sober and straightforward explanation for why people might find her lacking in trustworthiness, when she said, “I’m careful with my words not because I’m hiding something, but because I’m careful with my words.” It is a vulnerability, full stop.

Fill-in co-host Tamron Hall quickly changed the subject: “It is a vulnerability according to the poll, but the big moment yesterday was walking out on stage with Elizabeth Warren, their hands held in the air there.”

The three morning shows all gushed over Clinton hitting the campaign trail with Warren.

Here is a full transcript of the June 28 coverage on CBS This Morning:

NORAH O’DONNELL: Republicans today will release the results of a highly contentious two-year investigation into the deadly Benghazi attack. 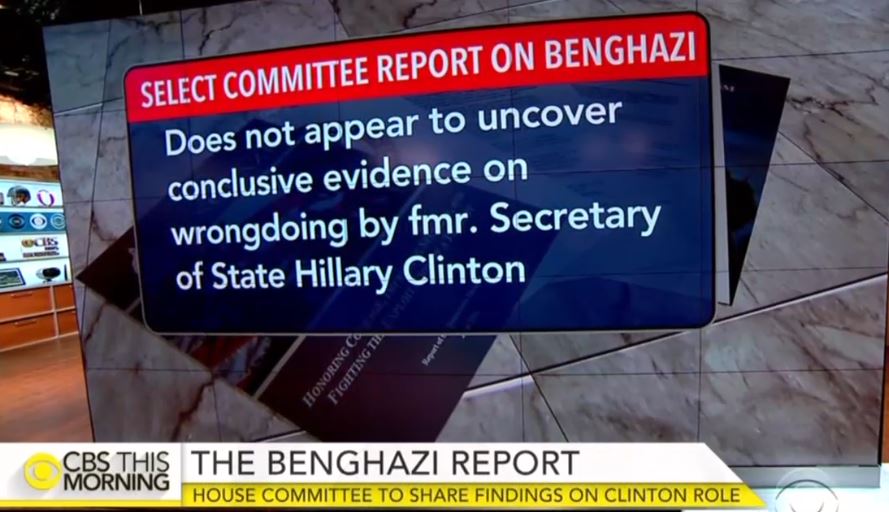 GAYLE KING: We're about to learn the findings of the sprawling and politically-explosive Benghazi investigation. The Republican-led House Select Committee this morning will release the results of it more than two-year investigation. It will reportedly detail then-Secretary of State Hillary Clinton's actions related to the deadly attacks in 2012 that killed four Americans.

CHARLIE ROSE: Democrats on the committee already released their own version. Their report was seen as an attempt to protect Clinton. Margaret Brennan is at the State Department with the investigation that could impact the presidential race. Margaret, good morning.

MARGARET BRENNAN: Good morning. Well, the four Americans killed in the Benghazi attacks are memorialized here at the State Department. But how they died is now political fodder for Democrats who support Hillary Clinton and Republicans who accuse her of stonewalling.

Today, the results of a $7 million, more than two-year congressional probe into the 2012 Benghazi attacks will be released.

HILLARY CLINTON [OCTOBER 22, 2015]: There was no credible, actionable threat.

BRENNAN: Whether or not it damages the presidential bid of former Secretary of State Hillary Clinton depends on what new details are revealed by Congressman Trey Gowdy, who led the probe.

REP. TREY GOWDY: I don't care if you send it by Morse code, carrier pigeon, smoke signals. The fact that he happened to send it by e-mail is irrelevant. What is relevant is that he was sending information to the Secretary of State.

BRENNAN: Republican sources describe the four-section report as a slam of the State Department for ignoring subpoenas, stonewalling, and withholding information about the deaths of four Americans, including U.S. Ambassador Chris Stevens.

CLINTON [JANUARY 23, 2013]: The fact is, we had four dead Americans. Was it because of a protest or was because of guys out for a walk one night who decided they’d go kill some Americans. What difference at this point does it make?

BRENNAN: It does not appear to uncover conclusive evidence of wrongdoing by Hillary Clinton.

BRENNAN: Yet that hasn't stopped presumptive Republican nominee Donald Trump from blaming her.

TRUMP: Ambassador Stevens and his staff in Libya made hundreds and hundreds of requests for security.

BRENNAN: On Monday, Democrats tried to defuse the attack by issuing their own politically-charged 339-page report. It accuses Republicans, particularly Donald Trump, who is mentioned 12 times, of conspiring to damage Clinton's presidential bid. It also blames Washington bureaucrats for the “woefully inadequate” security protection in Benghazi.

In the statement this morning, the State Department says it has released hundreds of thousands of pages of documents related to Benghazi and upgraded security after the attack. But it also points out that it handed over e-mails. The discovery that Clinton was using a private server for government work was revealed by this committee. And Nora, an FBI investigation into that issue is still ongoing.

NORAH O’DONNELL: Alright, Margaret, thank you so much. And longtime Clinton aide Huma Abedin will answer questions under oath today in a lawsuit over those e-mails.

CHARLIE ROSE: We are beginning to learn the results of the long-awaited and contentious Benghazi investigation. The 2012 attacks killed four Americans, including Ambassador Chris Stevens. Republican sources say the congressional report accuses the State Department of ignoring subpoenas, stonewalling, and withholding information.

GAYLE KING: The more than two-year investigation does not appear to uncover any conclusive evidence of wrongdoing by then-Secretary of State Hillary Clinton. Democrats on the committee yesterday released their own report, it accuses Republicans of conspiring to damage Clinton's presidential bid. Their report says the committee chairman was quote, “conducting this investigation like an overzealous prosecutor desperately trying to land a front-page conviction.”

NORAH O’DONNELL: Hillary Clinton says Americans’ trust in government has eroded in a speech in Chicago yesterday. She acknowledged she has to improve her own record.

HILLARY CLINTON: You know, you hear 25 years worth of wild accusations, anyone would start to wonder. And it certainly is true, I've made mistakes. I don't know anyone who hasn't. So, I understand people having questions. The reason I sometimes sound careful with my words is not that I'm hiding something, it's just that I'm careful with my words. I believe what you say actually matters.

O’DONNELL: Clinton also said trust has to be earned.