On Thursday, all three network morning shows took out the long knives and savaged Ted Cruz for naming Carly Fiorina as his running mate. The CBS, NBC, and ABC broadcasts dismissed the move as a “desperate” “Hail Mary pass” and touted Republican frontrunner Donald Trump mocking the announcement.

At the top of CBS This Morning, co-host Charlie Rose set the nasty tone of the coverage: “Critics hammer Ted Cruz's announcement of a running mate as a desperate attempt to revive his campaign.” Minutes later, fellow co-host Norah O’Donnell piled on: “Ted Cruz is trying to stop Trump by choosing a running mate, Carly Fiorina. And as you just heard, critics call it a desperate ploy that is bound to fail.”

In the report that followed, correspondent Chip Reid declared: “After suffering a five-state defeat....Ted Cruz tried to change the subject....It's a Hail Mary pass for a candidate with no clear path to the Republican nomination.”

Later in the segment, Reid labeled Cruz tapping Fiorina as a “hasty” decision and compared it to Ronald Reagan picking a VP ahead of a contested GOP convention in 1976, concluding: “The move backfired, and [Gerald] Ford won the nomination.”

Reid used Trump to further hammer the pairing: “Trump immediately tweeted out this interview from January showing Fiorina criticizing Cruz....And later scoffed at his rival's big news.” A soundbite ran of the billionaire: “Here's a guy picking a vice presidential candidate. He has zero chance.”

In addition to the fire from Trump, Alexander also touted left-wing California Senator Barbara Boxer attacking Fiorina: “Boxer, who beat Fiorina in 2010, comparing Cruz's moved to HP’s doomed Compaq merger. ‘I predict that the latest Carly Fiorina merger will be as successful as her last one.’”

ABC’s Good Morning America led off with the headline “Hail Mary Pass,” as co-host Robin Roberts remarked: “Ted Cruz in an attempt to save his campaign drafting Carly Fiorina as his running mate. Donald Trump mocking the move.” A clip played of Trump: “Cruz can't win. What's he doing picking a vice president?”

In a later report, correspondent Jon Karl used the same talking points as his media colleagues: “Well, Donald Trump has already declared himself the presumptive Republican nominee. But Ted Cruz is hoping his Hail Mary VP move can shake up the race. It's a long shot move by Ted Cruz to try to save his campaign.”

Following Karl, co-host George Stephanopoulos teed up political analyst Matthew Dowd to denounce the Cruz/Fiorina ticket: “And Matthew, I take it you think about this Cruz/Fiorina thing the same way that Trump does?” Dowd ranted: “I – yeah, I think it's going to have zero effect. When you’re at the end of a season and you’re way behind and on a bad six-game losing streak, adding up a relief pitcher who flushed out of the majors earlier by getting shelled isn't going to help you instill faith in your fans.”

Immediately after news broke on Wednesday of Cruz and Fiorina teaming up, liberal activists and media pundits took to Twitter and began hurling attacks. While anchoring MSNBC’s live coverage of the campaign announcement, Hardball host Chris Matthews ripped Fiorina as a “three-time loser.”

Here is a full transcript of the April 28 segment on CBS This Morning: 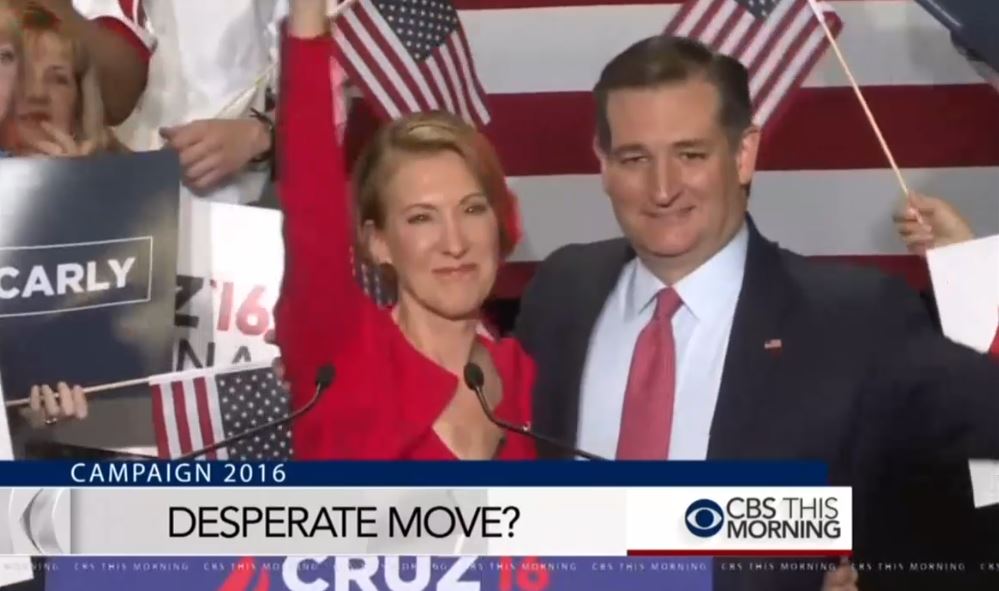 CHARLIE ROSE: Critics hammer Ted Cruz's announcement of a running mate as a desperate attempt to revive his campaign.

NORAH O’DONNELL: Rival Ted Cruz is trying to stop Trump by choosing a running mate, Carly Fiorina. And as you just heard, critics call it a desperate ploy that is bound to fail. Others say Cruz is using the ex-Silicon Valley CEO to pander to California voters. Chip Reid in Washington looks at Cruz's nearly unprecedented choice. Chip, good morning.

CHIP REID: Well, good morning. After suffering a five-state defeat, Donald Trump Tuesday –  Ted Cruz tried to change the subject, announcing his pick for vice president much earlier than most past candidates. It's a Hail Mary pass for a candidate with no clear path to the Republican nomination.

TED CRUZ: The next Vice President of the United States, Carly Fiorina!

REID: Ted Cruz made his big announcement in Indiana, home to a primary that may be his last chance to stop Donald Trump.

REID: Cruz's hasty VP pick comes earlier than any in recent history. Some compared it to the move by Ronald Reagan in 1976, when he named Senator Richard Schwieger as his VP choice a few weeks before a convention fight against Gerald Ford. The move backfired, and Ford won the nomination.

CRUZ: It is unusual to make the announcement as early as we're doing so now.

REID: But the timing wasn't the only unusual part of Wednesday’s event.

REID: Fiorina used part of her to serenade Cruz's two young daughters. She later denounced Trump as a fraud.

FIORINA: Donald Trump, I don't care if you put an "R" on your Jersey, that doesn't make you a Republican.

FIORINA: Ted Cruz is just like any other politician.

REID: And later scoffed at his rival's big news.

TRUMP: Here's a guy picking a vice presidential candidate. He has zero chance.

REID: In Indianapolis, Trump rolled out an announcement of his own.

TRUMP: You know, normally they come out, they introduce Trump. Here I'm coming out, and I'm going to introduce Bobby Knight, okay.

BOBBY KNIGHT: They talk about he isn't presidential and I don't know what the hell that means.

REID: It was perhaps no coincidence that Cruz picked Fiorina on the afternoon of Donald Trump's big foreign policy speech. And he may have taken a page from John McCain's playback. In 2008, McCain stole some of the thunder from President Obama's acceptance speech by announcing Sarah Palin as his running mate the next day. Gayle?