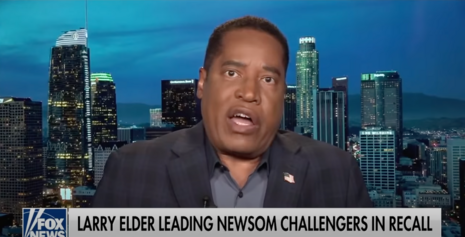 Los Angeles liberals really can’t stand the idea of a black conservative becoming the next governor of California. In fact, LA Times columnist Erika D. Smith admitted Elder “infuriated” her, so last week she wrote a hate column smearing him a “black face of white supremacy.”

But shockingly, not everyone shared Smith’s hateful sentiments. After receiving conservative backlash, the journalist doubled down on her nasty commentary by showing off her “hate mail,” as some kind of proof that Elder’s supporters were racist white supremacists.

In fact, that’s what she called her Friday column “Larry Elder’s fans prove he’s a face of white supremacy”:

Despite Elder’s insistence during a recent rally in Woodland Hills that he couldn’t possibly be the palatable Black face covering for the ugliness of white supremacy, my social media feeds and inbox tell a different story. For a solid week I’ve been getting hundreds of racist messages from Elder’s angry mostly self-proclaimed white supporters.

Smith proceeded to display some of these angry messages, most of which held the usual sloppy hot take you’d see on Twitter or in internet comment sections. But she didn’t just reserve her column to just pettily respond to hate mail. She mainly used it to convince her readers that Newsom, was better for black Americans:

I get it. I’m also fed up with the explosion of homelessness, driven by an ever-worsening affordability crisis. And it makes me mad to remember the confusing and often contradictory messaging coming out of the Newsom administration during the worst of the COVID-19 pandemic.

But watching Elder make campaign stops across California reminds me of watching former President Trump pitch Black voters while he was running for president the first time...Casting what, for most Democrats would be a protest vote against Newsom would put Elder in a position to become governor--and open the doors to far-right thinking and white supremacist policies…

She also was irritated by readers who called her a “racist” for agreeing with BLM Los Angeles co-founder Melina Abdullah, that Elder is “a Black face on white supremacy.” She shot back: “Skin color and upbringing don’t preclude anyone from being an enabler of white supremacy, though!”

Repulsed by readers suggesting a Republican could run the state better, Smith remarked, “Here’s the thing: People who are not Black don’t get to make decisions about what we feel is best for us.”

She’s right, so why is the left trying so hard to convince black Californians to turn a blind eye to Newsom’s failed leadership?

That’s exactly what she does to end her column:

So yes, I do believe that a wealthy white man will do less damage to Black Californians than Elder, a Black man who rose from poverty. On Tuesday afternoon, several Black elected officials led by Rep. Barbara Lee (D-Oakland) held a rally via Zoom to say they believe the same.

The reason is simple. Newsom is at least trying to do what most of us want by addressing the root causes of our problems by dismantling white supremacy, not by embracing as supporters some of the very people who embody it.