CNN’s Keilar Bitterly Rants at GOP Senators: They’re Past the ‘Point of No Return!’ 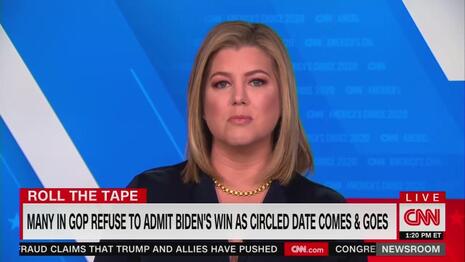 It may be called CNN Newsroom, but if CNN hosts spend nearly every show launching nasty tirades against Republicans, is it really still, “news?”

Afternoon host Brianna Keilar opened her 1:00 p.m. Eastern hour show on Thursday by singling out Republican senators who have not called Joe Biden, “President-Elect” in the past 24 hours, after the Electoral College made Biden’s win official. After Senate Majority Leader Mitch McConnell (R-KY) congratulated Biden from the Senate floor today, Keilar took that news as license to conduct a witch hunt on other Republicans who haven’t done so yet.

As the chyron, “Roll the Tape: Many in GOP Refuse to Admit Biden’s Win as Circled Date Comes and Goes," remained on-screen, Keilar gave snarky commentary that later turned into a nutty partisan attack:

... [L]ike the Wisconsin Senator, Ron Johnson, who announced if Biden won the election, ‘it is certainly walking down that path, isn't it?’ It is not walking, it walked. A month ago! The only thing going down a path is Senator Johnson and it appears he is being dragged. Johnson cited, quote, “a large percentage of the American population who just don't view this as a legitimate result for a host of reasons.” Reasons like their senators that won't acknowledge the result of an election?

KEILAR: Very shortly, in just 36 days, President-Elect Biden will be President Biden. Still many Republicans continue to enable the President's cries of a rigged election that wasn't, all the things they have said to pacify Trump and his supporters whose votes they rely on, they  now define the Republican party. Because when they're done fist bumping Senator Harris congratulations in one moment, only to cast doubt on the result of election on the next, they may find what a slippery slope they're on. A path, as Senator Johnson might say, where the party that doesn't believe in science, the party that promotes conspiracy theories, the party that undermines public health which kills people, and the party that promotes racist extremism becomes the party that opposes the most American of things, democratic elections. Somewhere on this slippery slope is a point of no return and Republicans may just find, it’s in their rearview.

It would only be too easy to make these same accusations against many in the Democrat Party (the party who creates laws rewarding people who believe they’re the opposite gender, “believes in science,” really?) but that would take too long.

Setting aside these cheap shots, how can she honestly say that the Republican Party is at “the point of no return” after this election? In the House, Republicans GAINED ten seats, while Democrats LOST nine. In the Senate, Republicans are just one seat short from holding the majority, which will be determined by the January runoffs in Georgia. While Biden won the presidential, it was not the massive blowout that the media predicted, as you can see here.

Liberty Mutual and Car Shield sponsored this GOP smear session. You can contact them at the Conservatives Fight Back page here.