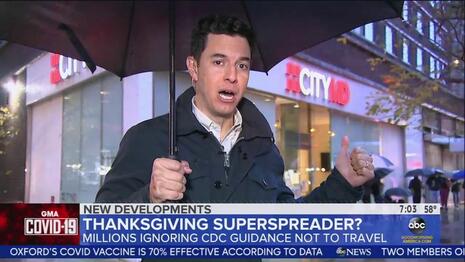 The media really wants to ruin your Thanksgiving holiday. As each day gets closer to the day when millions of Americans will get together with their families they probably haven’t seen in months, the networks get more obnoxious in insisting Thanksgiving meals are COVID death traps, despite the virus’s high survival rate.

“Look at these lines at airports all across the country. That’s Phoenix right there. CDC put out a travel warning saying do not travel for Thanksgiving. Apparently a lot of people are not listening,” he whined.

“Not listening,” fill-in anchor T.J. Holmes agreed, before gushing about COVID record numbers in hospitalizations. The journalists seemed to be rooting for the holiday to become a “super spreader event.” On screen it read, “Thanksgiving Super Spreader? Millions Ignoring CDC Guidance Not to Travel.” Two back-to-back reports followed fretting about COVID and Thanksgiving.

Correspondent Tom Llamas’s mostly negative report also fretted about packed airports, and long testing lines, with this dire warning from a frontline worker: “We definitely do not want to see Thanksgiving family get togethers be Christmas family funerals.”

After Holmes warned Americans to "just don't do it,"  correspondent Gio Benitez marveled over the how many are expected to travel.

“These numbers are surprising and perhaps even troubling to a lot of people who hoped that many would just stay home, George,” Benitez complained.

Stephanopoulos then fretted with New Jersey’s Democratic Governor Phil Murphy about his COVID numbers spiking and police officers who are reluctant to enforce Murphy's new rules limiting gatherings to 10 people inside someone's home.

"We just heard the police chief say he's not going to enforce these new rules. Anything you can do about that?" Stephanopoulos demanded.

Murphy claimed that police chief was an "outlier" even though many in upstate New York have made headlines for refusing to enforce similar rules from Governor Andrew Cuomo (D).

“Americans have been told that we can't even see our families for this holiday, and yet here’s the White House planning to hold these holiday parties indoors. What kind of message is this sending?“ she asked. When the non-political Adams wouldn’t take the bait, she tried again:

“Small and indoors is exactly what’s not happening at the White House. Have you shared these tips with your colleagues there at the White House about this holiday party? Are you concerned this could be a super spreader event?”

But does ABC really care about COVID hypocrisy? If they did, why did they completely ignore California’s Democratic Governor Gavin Newsom flouting his own COVID rules with a swanky indoor dinner party for which he only offered a half-hearted apology after he was caught?

Xfinity and CarMax paid for this anti-family, Thanksgiving bashing segment. You can contact them at the Conservatives Fight Back page links provided.