2016 Amnesia? Whoopi Demands Conservatives ‘Suck It Up’ Like ‘View’ and Clinton Did 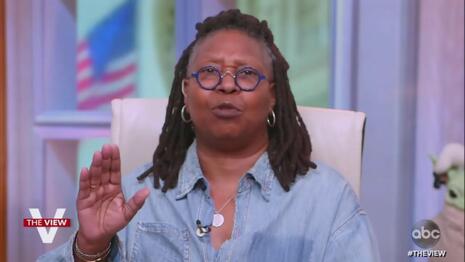 The hosts of The View opened Monday’s show dancing and celebrating over Joe Biden being named President-Elect. Amid their gushing over Biden and Harris’s speeches, they reserved bitter criticism for the right and President Trump. Completely serious, Whoopi angrily rebuked conservatives to “suck it up” and accept Biden won the election just like Hillary Clinton and The View supposedly did after the 2016 election.

After dancing and cheering that she would finally be able to say the president’s name, (Whoopi's moniker for Trump is ‘You-know-who’) she launched into a tirade against Republicans calling for recounts while claims of voter fraud are being fought in court. But Whoopi's argument was undermined by her foolish claim that Clinton and the left had no problem accepting the 2016 election results:

I want to say to all those people who don't believe that Americans actually got out and voted, let me say this to you. When you-know-who was elected four years ago, you know, Hillary Clinton didn't say, ‘Hey. Wait a minute. This doesn't feel right, stop the count.’ She didn't say, ‘this isn't right.’ I'm not going for -- she didn't say any of that. So all of you, suck it up. Suck it up like we sucked it up, and if you are not sure that you are comfortable with Joe Biden, do what we did. Find things and then take it to the law, and if the law says it's something to look at, look at it, but from now on, suck it up. Grow the pair for him that he can't grow for himself because this is ridiculous. You're not sure that he won. You're bringing into question all these Americans who voted legally, came out and stood and voted. How dare you question it?

First of all, does anyone on the left really believe Hillary Clinton accepted the 2016 results? Most of the media  followed her lead in denying Trump won legitimately even till this day. And Whoopi really is trying to rewrite history if she wants to claim she and her co-hosts “sucked it up” in 2016. Is this what “sucking it up” looks like? How about this? Or this?

Their four year long meltdown over Trump's 2016 win continues to this day. Joy Behar praised Whoopi, saying she deserves a Grammy Award for not saying Trump's name before gushing that Americans saved democracy from Trump destroying it:

BEHAR: Truth, justice and the American -- the American way. It's back. It's back. I don't think that people understand. Today everybody should be happy because just picture in your mind what it could have been if he would have won. It would have been the end of this country. It would have been the end of democracy and I am not exaggerating. I am not exaggerating. I believe in truth. He start out lying and he would just continue for another four years. We would never get out of this COVID disaster that we're in. We would never have scientists if he were here. So please, everybody, take a breath and say thank you, America, for saving our country.

After more celebrating that Americans all over are waking up with an "unbridled lightness of being" over Biden winning (as Ana Navarro put it) Whoopi vented about the mental trauma she's put herself through these past four years:

"I had no idea how enraged I had been for these last four years. When I started crying, that's when I knew," she gushed before doubling down on her earlier comments to "suck it up" Republicans (click expand):

I want to tell you foreign leaders were elated. They know this means a return of U.S. leadership. You-know-who has become a crybaby. He's a crybaby in wah wah chief. It didn't go our way. Hillary did not whine. Hillary did not whine. She did not say we need a recount. She said, okay. You won fair and square even when we knew the Russians had been in there. She did not say, 'well, I should be president now.' She didn't. She did what you're supposed to to do. If you don't win, then you say, okay, and you fight harder next time which is what's happening...So when I hear these people saying, you know, when I hear the Republicans saying, you know, we have to recount, listen. Suck it up. Suck it up. This is the United States of America. When our guys win, we got to suck it up. When your guys win, we got to suck it up. We each have to do it what we have to do. That's the American way. So let's at least try to be respectful because if you are not going to respect the fact that all these people came out and voted, you're basically saying you don't care about the American democracy. That's what you are saying. All of y'all who said, well, I don't know. You know. Suck it up.

Carvana and CarShield sponsor The View, you can contact them at the Conservatives Fight Back page links provided.