No Kidding: ABC's Raddatz Reveals Not 'A Whole Lot of Enthusiasm for Joe Biden' Among Voters 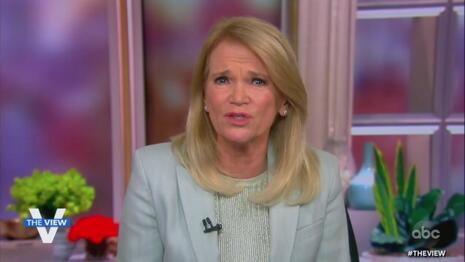 After giving debate advice to Democrat presidential candidate Joe Biden, ABC News correspondent Martha Raddatz continued speaking with the liberal hosts of The View about the election on Tuesday’s show. She actually made co-host Joy Behar enraged by admitting that she hasn’t found “a whole lot of enthusiasm for Joe Biden” among voters.

Raddatz first told the hosts about being “shocked” that many Americans she spoke with across the country were more concerned about the economy than the media's panicky narrative on coronavirus:

WHOOPI GOLDBERG: Welcome back. Martha, you went on a 6,000-mile road trip across America to see what was on voters' minds. What did you find out?

MARTHA RADDATZ: At lot of people are talking about the economy more than anything else. I was very surprised, Whoopi, because COVID when you cross the country, you wouldn't really know it's happening. I was really shocked at how few people were wearing masks in certain areas. It's like I'm tired of this. I'll just get back doing what I wanted to do before…

She irritated Joy Behar by sharing her observations that Trump’s base is unmoved by the New York Times taxes story:

The hard-core Trump voters, some of the people you saw me talking to, they basically say Trump walks on water. Nothing will change their mind. In fact, this morning I called someone I talked to on the road trip about Donald Trump and the tax story. He said good for Donald Trump. As long as it wasn't illegal, I want the name of his accountant. So those people, that solid base, is not going anywhere.

“Oh, god,” Joy Behar groaned. She was about to get more bad news from Raddatz:

When co-host Sunny Hostin wondered what would move the needle for undecided voters, even the ABC reporter had to admit these voters found Trump's policies more important than his “behavior:"

I think a lot don't know. They can't articulate it. I asked that same question saying I can't believe you're undecided at this point. Joe Biden has been around for a long time. Donald Trump has been around for four years. A lot of them say I want to hear what he'll do for America. It's that vague. I also found that people who are on the fence, they will excuse Donald Trump's behavior to some degree, but then they go back to what they like about him. When they go in that voting booth, they're either going to vote for what they believe in as a policy, as an issue, whether it's anti-abortion, whatever it is, over what they believe Donald Trump has done for the country.

But Joy Behar was disgusted and proved Raddatz's point by arguing Democrats were enthused...to get Trump out of office:

JOY BEHAR: I wanted to speak to the fact that there's not a lot of enthusiasm on the left as on the right. I think the enthusiasm on the left is to save America from a criminal in the White House. That I think is what is motivating voters for Joe Biden. The reason that he's going to work is because he also appeals to blue collar workers. He's going to help those people that Trump promised to help, but did absolutely zilch for. These people that say good for Donald for not paying anything, that's dumb. We're trying to keep the police force working and the fire department and these people think it's okay for the President of the United States to not contribute to America? Please, please!

Raddatz also spoke briefly about her time as a debate moderator at the 2012 vice presidential debate, declaring how civil it was compared to 2016:

The 2012 debate with Joe Biden and Paul Ryan was so civil. They were both, dare I say, gentlemen. We talked about foreign policy. I don't think you're going to get a lot of that tonight. Then at the very end of -- believe it or not, how quaint is this, at the end of the debate in 2012 I asked about the tone of the debate and how negative it had been. Seems quite quaint in 2012. I don't remember now, at all, it being that negative. Then comes 2016 and it was right out of the gate.

Puffs and Finish sponsor The View. You can contact their advertisers at the Conservatives Fight Back page here.