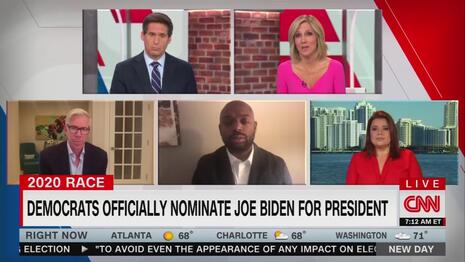 CNN wants you to believe that Joe Biden is your candidate if you are a Republican who doesn’t like Trump and want a “return to normal.” Despite ample evidence from the candidate’s own mouth that he has embraced the radical-left wing of the Democrat party, CNN’s New Day tried to make the case Wednesday that Biden was someone who “crosses the aisle.”

Political analyst David Gregory insisted the DNC was showcasing how Biden was going to get us “back to normal” and take a “break from all of the tumult in our politics and our country.” He tried to have it both ways by saying Biden would return us to calmer times of the past but also move the party forward in a progressive direction with Harris (click "expand"):

DAVID GREGORY: What he's saying to the country is, look, I'm not really the future. I'm much more the past. But we need to get back to a little bit of normal here. We need a break from all of the tumult in our politics and in our country. Let’s take a transitional time where we can just take a breath here and at the same time, I'm also a guy who chooses Kamala Harris, who wants to continue this arc of history that Barack Obama started, so get excited about where the party is going and who the future leadership is. And I expect that President Obama can capture the excitement, not just motivation, they're one in the same, but excitement--hey, be excited about this ticket and begin to address the very-- the differences in the party, the Progressive wing of the party that is going to play a bigger role than perhaps the time AOC got last night in front of the convention. So I think we're going to begin to see that future look tonight.

He continued longing for the days before Trump and repeated how Biden was going to let the country “take a pause” and “transition back” to “normal:”

GREGORY: I think the larger point is to say to the country that a lot of Republicans that you may know and have known for decades are not part of this Republican party. That there's something really wrong here. And that again, I keep going back to the same place. Let's take a pause, let's transition back to what feels like a more normal time. Whatever our differences and there's still a lot of differences in politics, can we get back to something that looks like regular order? That's what this convention seems like to me.

No one on the panel noted that Democrats are the party who has become radicalized, moving to the far left in recent years. So putting them in leadership only guarantees that the country moves further left than ever before, not “returning to normal.” Not to mention that BLM activists have been protesting and rioting in the streets for months now because they do not want the country to return to calmer times either.

But co-host Alisyn Camerota wondered if progressives were feeling slighted for these “Republican” endorsements of sorts being highlighted:

Astead, the DNC has done a really interesting job of having all of these Republican voices, you know, John McCain from beyond, as well as Colin Powell. I mean, John Kasich. We could go down the list and so do you think that's effective and do you think the Progressives have a point as some have mentioned on social media, that their voices are not being as amplified?

New York Times national political reporter Astead Herndon dismissed this suggestion, saying that Joe Biden "crossing the aisle" defined his career and that bipartisanship would be the direction the Democrat party was going:

I think I agree with everything that was said. I think I would also say, this is a culmination of Joe Biden's political career. He works with Republicans. He crosses the aisle. If you're going to expect a convention that does not reflect that, Progressives should have nominated their chosen candidates. This is what the Democratic party under Joe Biden will be.

This is absolute bunk but the media keeps trying to deceive Americans into thinking he’s a moderate who will be sympathetic to Republican concerns. If this really was the case, no hard-core liberal journalist on television would be voting for him.

This media whitewash of the Biden-Harris ticket’s radical politics was paid for by Liberty Mutual. You can find their contact information linked.