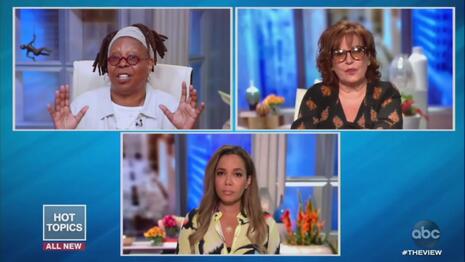 The hosts of The View went into meltdown mode on Tuesday’s show after a video surfaced of federal agents detaining violent Antifa anarchists in Portland, Oregon, last weekend. The show hosts took a deep dive into conspiracy theory land, ranting this was a “planned attack against Americans," the "end of Democracy" and comparing it to the Kent State massacre.

After nearly two months of rioting and attacks on both federal buildings and agents, co-host Joy Behar worried the footage of federal officers on the ground in Portland meant we were turning into a fascist country.

“He dares call himself the law and order president. I'm witnessing fascism in America... People need to pay attention, this is the beginning of the end of democracy, if we re-elect this guy, I don't want to think what will happen to this country!” she fretted.

Every American should really be concerned when you have a U.S. President deploying federal troops under the pretext of protecting federal property from vandalism which is essentially just graffiti, and using that pretext to use violence against people who are protesting which is our right, our Constitutional right under the Constitution. And using that as a pretext and ratcheting up the violence and you know, arresting people with secret police, just arresting people in unmarked cars, this is something as Joy said, this is the beginning of fascism, this is something that you see in dictatorships and I was terrified to see something like this. Federal agents doing this, this is something that I've never seen, this is something that I've been speaking to my law enforcement friends, they've never seen. I quite frankly think it's not only unconstitutional I do think it's illegal….

She added, “We have to pay attention because we’re going down a slippery slope and we have really the actions of a dictator!”

While the Chicken Little hosts have pulled out the "America’s turning into a fascist country" line many times before since Trump took office, co-host Whoopi Goldberg took the hyperbole into conspiracy theory territory by suggesting this was a “targeted” and “planned” attack against Americans:

Not to be outdone, Joy Behar claimed these Portland arrests reminded her of the Kent State massacre.

You know what this reminds me of? Back in the day when the militia--or whatever they were-- killed that kid at -- those children at Kent state, when our government is actually killing American citizens, children, they were college kids, it's the same -- we were horrified then, we're horrified now. Nixon had to go, and this president has to go, otherwise we have no country.

13 college students protesting the Vietnam War were shot at by the Ohio National Guard and four of them were killed. Meanwhile, reports show those temporarily detained last week were released shortly afterwards, unharmed, and have already been giving media interviews. So much for that comparison.

Meanwhile, the radical left has doxxed at least 38 DHS officers in Portland, putting the officers and their families in harm's way.