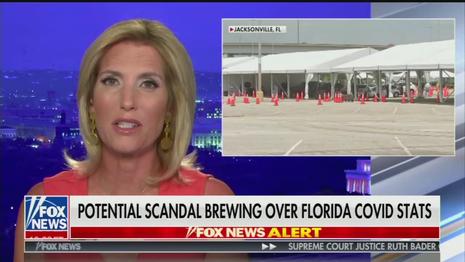 In the media’s determination to vilify Florida as the new coronavirus epicenter, they are ignoring an alarming report put out by a Fox Orlando affiliate which suggested the state’s Department of Health published inflated, erroneous positive infection data.

Fox 35 in Orlando reported Tuesday that they conducted an investigation into the numbers provided on Florida’s Department of Health website, after they noticed many labs had reported 100 percent positivity rates of the virus among people tested. So Fox 35 reporter Robert Guaderrama cross-checked this data by calling the hospitals themselves. Turns out, the numbers the state had published were way off:

The report also showed that the Orlando Veteran’s Medical Center had a positivity rate of 76 percent. A spokesperson for the VA told FOX 35 News on Tuesday that this does not reflect their numbers and that the positivity rate for the center is actually 6 percent.

Getting the numbers right is obviously hugely important in evaluating how successful states and local governments are doing with the virus and what measures to take going forward. Yet ABC, NBC, CBS and CNN broadcasts appear to have ignored the report thus far, according to a keyword search on SnapStream. MSNBC's Kerry Sanders did however briefly reference the "clerical error" by Florida's DOH documenting 100% positive cases, during the 3pm hour yesterday.

However Fox and Friends as well as the FNC’s primetime lineup shared and discussed the report Tuesday, and Monday night, respectively. Laura Ingraham said the report exposed a “potentially massive scandal brewing regarding the way hospitals, labs, and others are reporting the percentage of positive test results.”

[L]ooking into the breakdown of test labs, I quickly noticed astronomical positivity rates. Now, mind you, Florida's COVID-19 rate is just under 11%. But dozens of labs report as having 100% positivity. Some only reported positive cases. The negative column, completely blank. So I asked myself, how can 100% of people testing at both sites test positive?

I reached out to several major hospitals in our area, Orlando Health and the Orlando VA, confirming errors in their numbers on the report. So after several requests for comment, today the Florida Department of Health released the statement reading in part:

"In recent days, the department noticed that some smaller, private labs weren't reporting negative test result data. The department immediately began working with those labs to ensure that all resorts to results were being reported in order to provide comprehensive and transparent data." These labs are required by the state to report all test results.

But here is something else that adds to the confusion. A spokesperson for Lee Memorial Hospital, in the Fort Myers area, tells me that they believe there is a problem in the state's data gathering system because it is their understanding that the negative results from their hospital were in fact submitted. So Laura, more questions to be answered. But this news is coming at so as so many Floridians are already questioning the numbers being reported by the state the state.

Ingraham also played some soundbites of CNN and MSNBC hyping Florida as the next New York. But Florida’s fatality rate is still not even close to matching what New York’s was when it was the hot spot. As Ingraham’s next guest, Dr. Charles Lockwood, the University of South Florida’s Health Dean noted that despite a concerning “huge increase in cases,” “the state’s case fatality rate is currently 1.5%. New York City right now is 10%.”

Florida’s fatality rate is still far behind what New York’s was when it was the hot spot:

Florida’s rolling seven-day average for deaths is now 92 per day, triple the 31 posted a month ago….Still, Florida’s death toll is nowhere near the national record. When COVID-19 was ravaging New York three months ago, state officials there recorded 799 deaths on April 9 and a seven-day average of 763 deaths on April 14, the highest in the country at the time. New York now has one of the nation’s lowest death rates per capita.