Stephanopoulos: 'How Can We Replicate' Camden's Defund the Police 'Across the Country?' 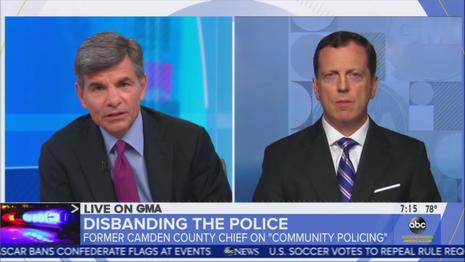 ABC’s George Stephanopoulos has spent all week promoting the radical left’s “defund the police” movement on Good Morning America. After bringing on Democrats Monday through Wednesday to tout police reform and defunding police, ABC brought “balance” to their coverage Thursday, by bringing on yet another progressive guest promoting the same agenda; this time it was the former police chief of Camden County, New Jersey.

The media has been hyping the Camden, New Jersey as the model all cities across the country should follow, after they disbanded their police department in 2013 in favor of “community policing.” While we’re seeing in real time how this model is giving power to a militant mob in cities like Seattle, ABC ignored that scary scene while talking with the recently retired police chief of Camden, J. Scott Thomson. Instead, George Stephanopoulos asked Thomson how the Camden “defund the police” model could be a lesson for the rest of the country and “replicated” in other cities:

Back in 2013 you actually disbanded and transformed your police force as your city was facing a public safety crisis, a high murder rate coupled with scores of complaints about excessive force. What did you learn from it? What did you do?

…Define that term community empowerment because we hear that and hear community policing a lot. That can mean a lot of different things to many different people.

…So dig beneath the slogan defund the police. How can you replicate it in other cities and counties across the country?

Thomson of course gushed about how wonderful this worked out for his community, despite the heavy criticism Camden has faced even from the left, that the media is ignoring.

Thursday marks the fourth interview Stephanopoulos has conducted since Monday giving free PR to progressive Democrats. Three out of the four interviews have been outright promoting the movement without criticism; the only exception to that was on Wednesday’s GMA where he gave some pushback to Congresswoman Alexandria Ocasio-Cortez.

Read the transcript, below:

GEORGE STEPHANOPOULOS: We are joined now by J. Scott Thomson, the former police chief of Camden County, New Jersey. Chief, thanks for joining us this morning because we want to talk more about your experience in Camden. Back in 2013 you actually disbanded and transformed your police force as your city was facing a public safety crisis, a high murder rate coupled with scores of complaints about excessive force. What did you learn from it? What did you do?

THOMSON: So, 2012 George was arguably the darkest hour in the city's history in terms of public safety. We had extremely high levels of mistrust. Virtually no legitimacy with the community in itself and a bold political decision was made to disband the police force and try something new. So we created a new policing paradigm and knew we had the rare opportunity to build culture as opposed to the challenge of changing culture so we really created this organization on three bedrock principles and that was that our officers were going to be guardians and not warriors and we were going to engage in extraordinary levels of community empowerment and we would embrace de-escalation as a part of our culture and not just as a training exercise.

STEPHANOPOULOS: Define that term community empowerment because we hear that and hear community policing a lot. That can mean a lot of different things to many different people.

THOMSON: Yeah that’s a great question because you know when there's 18,000 police departments in the country and there’s probably 18,000 different definitions for community policing, and community policing cannot be a unit. It can't be a group of officers that are going and doing nice things in the neighborhood. It can't just end there. It's got to be an organizational philosophy embraced from the top on down. And in Camden we actually did the extraordinary move. We got rid of our patrol division and our entire police department operates as community officers. The officers' jobs are to get to the root cause issues of the problems. Don't look to arrest, issue summons or use force to try to make things right. We want to work with the community. We want to be coalescers, conveners. Working with them and forcing the law with them and not just on them so that we can make their quality of life better. What we have found is we've reduced murders by nearly 80%. We went from having 175 open air drug markets to less than 20. We have excessive force complaints dropped 95% and the best thing about all this was that the revolution of the city has been more of the empowerment of the people reclaiming their city, more so than the police militarizing it and enforcing the law.

STEPHANOPOULOS: So dig beneath the slogan defund the police. How can you replicate it in other cities and counties across the country?

THOMSON: Well I think you need to be careful with the defunding. First of all, I'm not really sure which definition we're going with. I heard it go from everything to abolishing the police, I don't think that is really an option to repurposing money to get to issues. Now, I don't think there is a progressive police chief in the country that wouldn't trade ten officers for another Boys and Girls Club. When you look at the more challenged police departments and peel the layers of the onion back there's been a defunding of that over the years in all the wrong places. There's many organizations that the only time the officers receive use of force training or de-escalation training is in their initial onboarding in the academy and then they’ll go 20, 30 years and never receive another refresher course.

STEPHANOPOULOS: Scott Thomson, thanks very much.