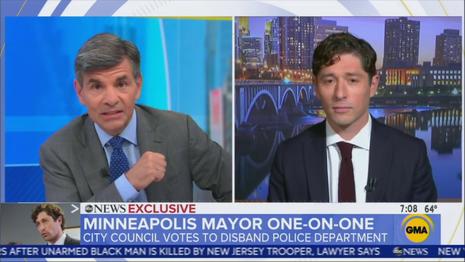 After letting rioters burn down his city, Minneapolis mayor Jacob Frey is the latest mayor to come under fire from left-wing protesters this week for not supporting calls to defund and abolish his city’s police department. On Good Morning America Monday, Frey faced more pushback, this time from ABC anchor George Stephanopoulos, who pressured him to bow to the far-left’s radical demands.

Just before Frey came on, ABC played a clip of a Minneapolis protest where the mayor was booed for not supporting abolishing the police department. “Go home Jacob, go home,” the angry crowd chanted. It was worse than what ABC showed. The leader of the protest cursed at him and at least one protester threw something at Frey, according to Fox News. Stephanopoulos touted how his city’s council had announced they would support abolishing the police department and asked if Frey would “veto” that decision:

"We just showed that video of you and we heard about what the council is deciding to do right now. So will you veto a council resolution to dismantle the Minneapolis Police Department?" he pressed.

Stephanopoulos didn’t mention that the council has a veto-proof majority for this decision anyway. As Frey argued the need for “massive structural and transformational reform,” and reiterated how he didn’t support dismantling the department, the ABC anchor continued to pressure him from the left.

Stephanopoulos touted calls from the more radical wing of his party to abolish the police, such as from Congresswoman Ilhan Omar calling the Minneapolis department, “rotten to the core:”

They were very clear last night this. This has to be the beginning of the end of the police department. You also have people like Congressman Ilhan Omar who represents Minneapolis saying it's rotten to the core and that it can't be reformed and they believe it has to start from the ground up.

Frey pointed out that the city’s police chief is a black man who had sued the department for discrimination when he was an officer in 2007. The mayor argued that punishments need to “stick” for officers and that he was going after the police union for protecting officers from being punished. But still Stephanopoulos kept insisting that the Democrat mayor needed to give in completely to demands from the radical left. He then asked, “Is there room for a compromise here with the protesters saying dismantle the police department? Just lay out what a compromise might look like and how you'll get them to accept it.”

ABC ended the interview by asking Frey a sympathetic question about both protesters and Trump attacking him.

Stephanopoulos didn’t ask about all the businesses in his city that have been burned, vandalized and looted because of Frey’s poor leadership, or the mayor’s outrageous request for state and federal funds to rebuild his city, after he abdicated responsibility and left it for rioters to destroy.

You can read the full interview in the transcript, below:

GEORGE STEPHANOPOULOS: We just showed that video of you and we heard about what the council is deciding to do right now. So will you veto a council resolution to dismantle the Minneapolis Police Department?

JACOB FREY: Let me be clear, I am for massive structural and transformational reform to an entire system that has not for generations worked for black and brown people. We have failed them and we need to entirely reshape the system. We need a full on cultural shift in how our Minneapolis Police Department and departments throughout the country function and am I for entirely abolishing the police department? No, I'm not. Over the coming days and weeks I'm looking forward to working with the council and talking with them about particularly what they mean when they say ending and abolishing and I'll be talking with them directly.

STEPHANOPOULOS: They were very clear last night this. This has to be the beginning of the end of the police department. You also have people like congressman Ilhan Omar who represents Minneapolis saying it's rotten to the core and that it can't be reformed and they believe it has to start from the ground up.

FREY: Well, in looking from the ground up, I look to our chief Arradondo. This was someone who literally sued the police department for racial discrimination this. This is someone who is chock-full of integrity and has been doing the very hard work to get that transformational reform and now he's our chief. I do support him. But let me be clear, there are so many areas where both mayors and chiefs, elected officials and otherwise have been hamstrung for generations because we can't get that necessary culture shift because we have difficulty both terminating and disciplining officers and then getting that termination or discipline to stick. And so let me be very clear, we're going after the police union, the police union contract, the arbitration provisions that mandate that we have arbitration at the end of the process and oftentimes that reverts the officer right back to where they were to begin with. We need to be able to have the culture shift and if we're going to do that it also means we need to have the ability to discipline officers to begin with.

STEPHANOPOULOS: Those are some of the changes you're calling for. Is there room for a compromise here with the protesters saying dismantle the police department? Just lay out what a compromise might look like and how you'll get them to accept it.

FREY: I don't want to speak for the peaceful protesters in Minneapolis. I can only speak for myself and the vision that we have for the police department, which requires massive structural reform and so, you know, everything is on the table at this point. I think right now we need to use this momentum, channel all this anger and sadness and energy to real structural reform and I think we're coming to a reckoning right now. A reckoning of our words from the past with our action that needs to take place now and into the future.

STEPHANOPOULOS: You are taking it from both sides during this entire crisis. We showed that video of the protesters telling you to go home saying threatening to vote you out next year. President Trump has not been shy on Twitter calling you weak. What kind of toll has this taken on you personally and do you think it might cost you your job?

FREY: You know, I have been attacked by everyone from Donald Trump to, yes, activists but I want to be clear, I support people expressing their First Amendment rights even when it means that they're calling me out. So is it difficult? Yes, of course, it's difficult. But let's remember this is not about me. This is about the tragic murder of George Floyd by a police officer. We need to be grounded in that as we move forward.

STEPHANOPOULOS: Mayor Frey, thank you for your time this morning.