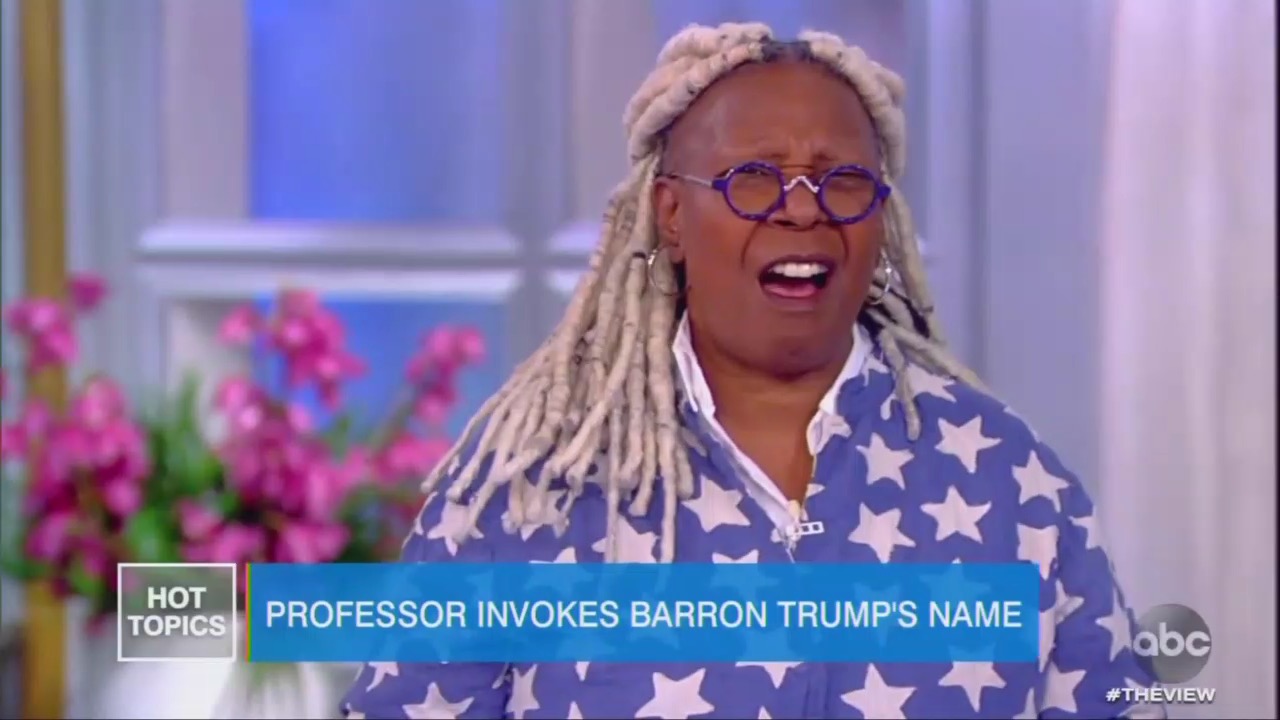 Whoopi also used the conversation as a springboard to bash Trump over food stamp reform.

With a feigned Valley girl voice, she gushed, “Oh my God! She’s so mean!” adding, “I mean think about all the things his father said about different people!”

Turning more serious, Whoopi claimed Karlan was “not being disrespectful or nasty,” (so she was being respectful and nice?) before arguing that Karlan wasn’t even going after Barron.

Even guest co-host, New York Times columnist Bari Weiss loved the nasty remark by Karlan. “Can’t you just imagine yourself saying exactly the same thing? I could just imagine tossing that up,” she gushed. What a nice sentiment.

Joy Behar also defended Karlan, saying about the right, “Why aren't they concerned about the 70,000 children being held at the border? They're worried about this one child?” she exclaimed.

Only co-host Abby Huntsman came out strongly against Karlan’s cheap shot, calling it “pretty sick” and a “total low blow” but Whoopi, Behar and Weiss twisted themselves into logical pretzels trying to claim Karlan wasn’t really attacking the President’s son.

Finally, Whoopi insisted they move on so she could rant about President Trump's reforms to the SNAP program. Proving that she clearly didn’t even read what was in the new requirements, she launched into a fact-free rant about how children and the elderly were going to be affected:

What's really pissing me off is while we're talking about all of this, there are children about to be let go on food stamps, and I just want to know -- I would like to know all of the numbers that back that up because I don't -- I have been on welfare, okay? I lived on welfare, and it helped me. It was good for it to be there for me. I want to know how many people are sitting around because they use this argument in the -- what was it the '70s? The welfare queen and all that.

People are not sitting around hoping to just -- people are trying to find work, okay? People are trying to find work, and you are not allowed to really work at all if you are getting stamps or assistance. You have to make all kinds of movement. Now you want to change the situation around, that's something, but why are you trying to knock all these people off? What about the elderly who is also able-bodied but may be unable to go do a job? What about kids? They are able-bodied as well. You're knocking them off. What the hell, man? What the hell? [ Applause ]

If Whoopi had bothered to read even one article on what these reforms were about, she would’ve seen that what she said was false. Even according to this heavily imbalanced article from ABC News:

The rule would impact “able-bodied adults” without dependents between 18-49 years old. USDA said in the statement it would not apply to “children and their parents, those over 50 years old including the elderly, those with a disability, or pregnant women.

But why bother with facts when your whole job is to be perpetually angry at President Trump?

Even though her co-host Sunny Hostin didn’t like Karlan going after Barron Trump, she backed up Whoopi and Behar’s tirades about Trump not caring about children: