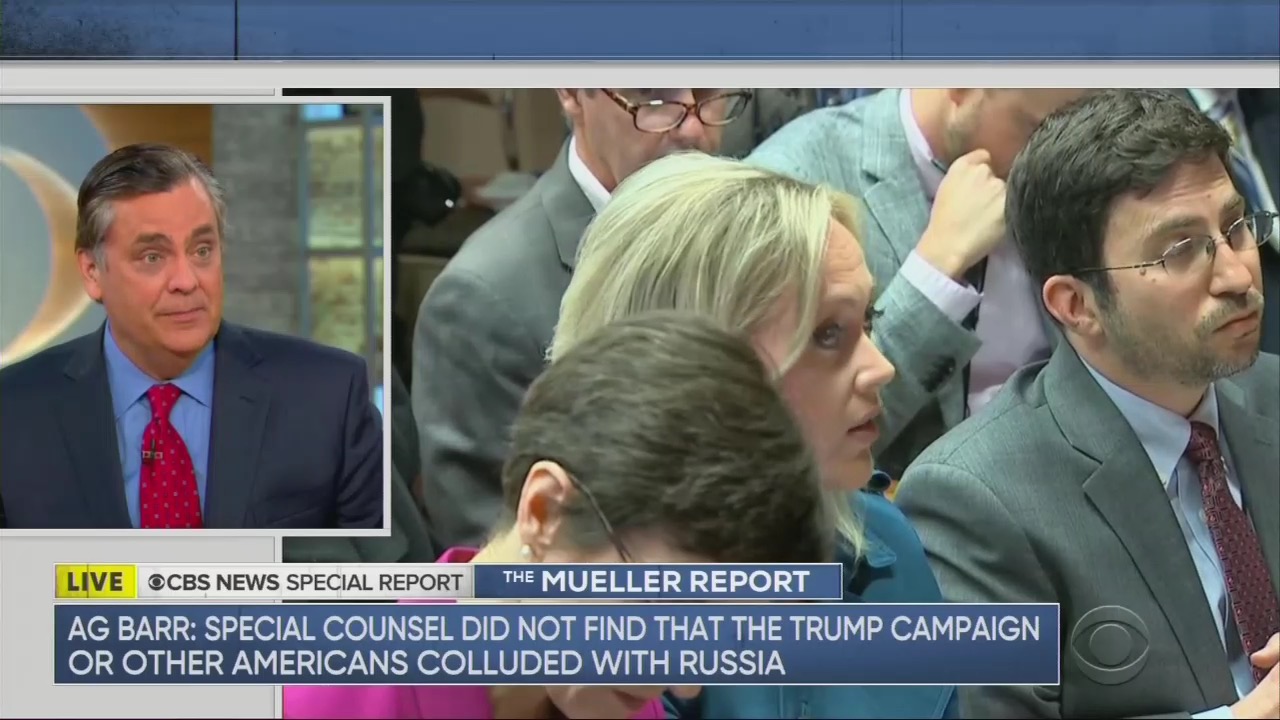 In the middle of the media’s outrage over Bill Barr’s statements at the pre-Mueller report release press conference, rational analysis was found on CBS, as legal analyst Jonathan Turley calmly and bluntly dismantled the Democrats’ concerns over the Attorney General’s impartiality. The George Washington University Constitutional Law Professor also called out CBS reporter Paula Reid’s badgering of Barr during the presser as “insulting.”

Repeatedly, CBS anchor Gayle King tried to legitimize Democrat’s pathetic attempts to discredit the AG as biased. But Turley swiftly shut down that theory, even criticizing CBS reporter Paula Reid for her question during the presser:

GAYLE KING: One of the main concerns they [Democrats] had about him having this press conference, Bill Barr, is that he would lay the foundation that would be very favorable to the President of the United States before anybody had a chance to look at this report. It's interesting that he did not answer the question, when he was asked by Paula Reid, ‘Are you the Attorney General or the United States or are you -- the criticism is that you are working as the Attorney General for Donald Trump.’ He did not answer that question!

TURLEY: I must admit I was grinning a little bit because I know Bill Barr well and that's when you started to hear a little bit of--

TURLEY: Irritation in his voice. And the reason is that Bill Barr really is cut from DOJ cloth. And that -- you could not ask anything more insulting to Bill Barr than that question. Now, he should not have gotten a little testy there. But Bill Barr is, as you see him, he's a very straightforward person. He doesn't really spin. He'll tell you straight up.

GAYLE KING: Democrats are angry that they shared information with the White House office of legal counsel. Do they have a legitimate gripe there?

JONATHAN TURLEY: Quite frankly, no. It is a tradition in the Department of Justice to show reports that deal with individuals of this kind, not just as a courtesy to opposing counsel but also as a sort of due process protection for the people named. There were no changes made.

At another point, co-anchor John Dickerson noted that Barr gave an “olive branch” to Congress saying they had oversight on this issue. Turley agreed but again slammed Democrats for demanding an unredacted report, which is illegal:

JOHN DICKERSON: It was very interesting he also referred to Congress' legitimate oversight interest which in the coming push and pull was a kind of olive branch, if you will, from the Attorney General, saying you have legitimate reasons to be asking for these things. Obviously the president says those questions are not legitimate.

TURLEY: As is giving them the report. The only thing redacted from the congressional report will be grand jury information. Bill Barr is absolutely correct, he cannot give that information to Congress. I know people have said otherwise. We just had a ruling a week ago that made it difficult even for a federal judge to remove rule 6-e information.

Dickerson concluded the segment noting that Democrats had an “uphill fight.” Turley argued that Democrats were now opposing “Mueller himself” and had nowhere to go from here at least in terms of a criminal argument against the President over Russia:

That's exactly right. The Democrats, even after the initial summary was given to Congress, came forward, people like Schiff and others, in saying, ‘no, we clearly have collusion.’ Well, look, they're now in opposition not just to Bill Barr and the Deputy Attorney General, they're taking a position in opposition to Mueller himself, that it's clear that that part of the report did not find collusion, certainly in any criminal sense. And if it's not collusion in a criminal sense, the question is, well, what are we talking about, if they found no conspiracy, no coordination?