After Trump Tweets Him, Leno Walks Back His Criticism for Anti-Trump Comedy: 'I Love Them All!' 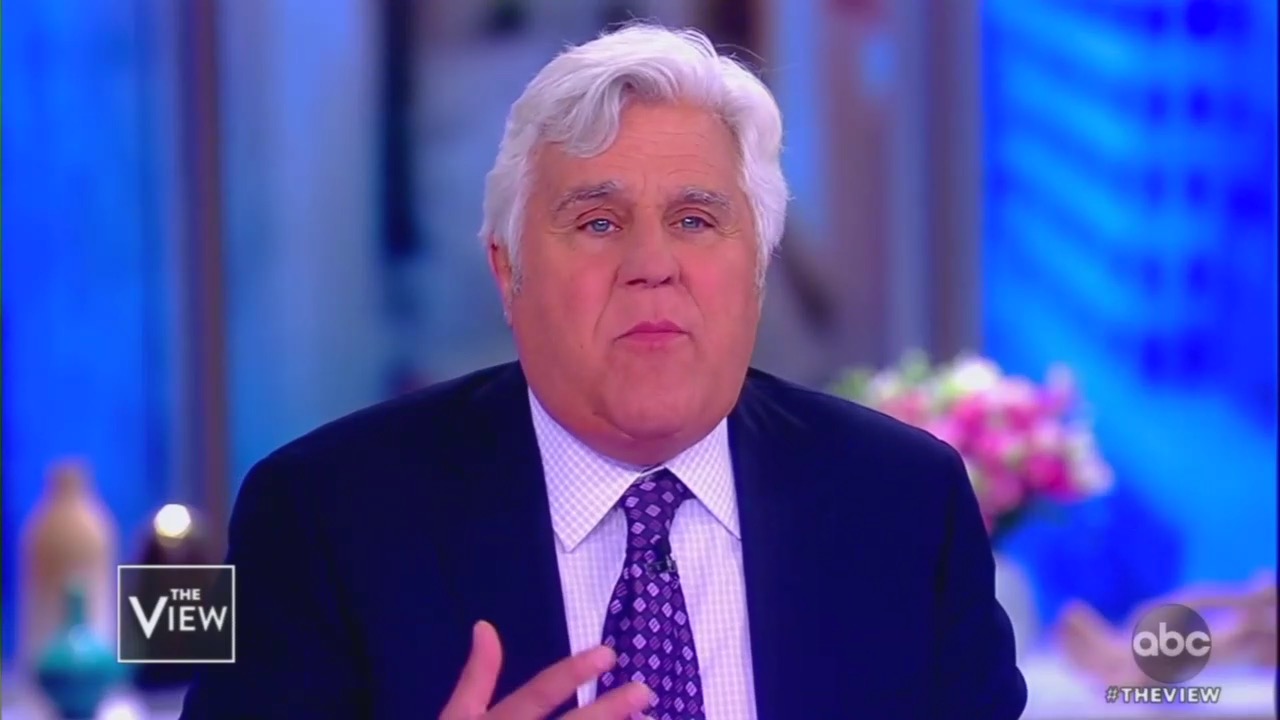 Former Tonight Show host Jay Leno tried to walk back some of his comments he made this week about late night comedy, on The View, Wednesday. Perhaps because President Trump seized on the comments, Leno clarified to the hosts that he “loved” the anti-Trump lineup on television and peppered his interview with high praise for President Obama.

As he came on the show, he joked, “I'm the only man that can bring Joy and Meghan together,” which made the hosts chuckle. Co-host Joy Behar dove right in, asking him to address his earlier comments.

“You don't like the idea that the late night comics are so one-sided. Is that true?” she bluntly asked. Leno denied this is what he meant, saying he “loved” all of the late-night hosts:

No, it's not that I don't like the idea. It's just the fact that all the jokes -- it's kind of the same joke. I love them all, Samantha [Bee] and Jimmy [Kimmel] and the other Jimmy [Fallon] and [Stephen] Colbert but you're all kind of the doing a different version of the same joke. That was my whole point. To me I always like to humiliate and degrade both sides equally.

“One side is doing such a good job of humiliating and degrading themselves!” co-host Ana Navarro quipped, to which Leno agreed, saying, “Well, that's true, that’s true.” Behar added in her two cents, that being a comic was not interesting when President Obama was in office.

“You know, I did stand-up up until Obama came in and then I was losing interest because he was too good and there was nothing to make fun of there. With [George W.] Bush, it was a bonanza!” she gushed, to again, Leno’s agreement.

After Leno talked about his battle with high cholesterol, co-host Abby Huntsman brought it back to politics again, asking, “Are you glad you're not on today given Trump as president?”

Leno said he was, simply because it was “easier” when you “liked” the people you were mocking, giving former President Obama as his example:

JAY LENO: I sort of am because to me it's easier when you kind of like people. The first time I had Barack Obama on the show he was a Senator and he came by himself and he had his coat over his shoulder and walked in and said, Jay, my name is Barack Hussein Obama, I'm running for president of the United States. I said, let's look at this. A black guy named Hussein nobody's ever heard of, you're going to be a two-term president! He fell off the chair laughing. Your name’s Hussein, you’re from where? [laughter]

ANA NAVARRO: He has a great sense of humor and great comedic timing.

LENO: He has a wonderful sense of humor.

LENO: Yeah. Nobody would ever want to follow him.

Leno also brought up Hillary Clinton, saying he used to include one joke about her in his act, but cut it, after he didn’t like the type of laughter it received:

“I used to do a Hillary Clinton joke,” he said, adding that he cut it. “I'd go, okay, they're laughing at it not because it's a joke but because it's a woman. I just took the joke out of my act because I didn't like the tenor of the laugh it was getting,” he explained.

Not everything was partisan, however. The former late-night host did share that he had fond memories of performing at the White House Correspondents' Dinner in the 1980s when President Ronald Reagan was in office and how Reagan had a good sense of humor. He told the hosts a story of when Reagan had told him a self-deprecating joke:

The Ronald Reagan story, he was really a good comic. I was sitting with him once, he said 'Jay, were you a good student?' I said, no, Mr. President, I he goes, 'Jay, I wasn’t a good student. I always kick myself thinking how much further I could have gone if I applied myself!'

As everyone laughed, even Joy Behar had to concede, “That’s an amazing story.”