On Sunday’s ABC roundtable on This Week with George Stephanopoulos, MSNBC pundit and New York Times contributor Michael Eric Dyson argued with conservative panelists, CNN’s Alex Castellanos and FNC’s Greta Van Susteren over Brexit and how it paralleled with Trump’s appeals to “white racist supremacist nationalism.” By contrast, Dyson stated, Hillary Clinton appealed to America’s “best ideals” and her “greatness” was in “her continuity.”

In a discussion on England’s decision to leave the EU, the panelists brought up how it related to American politics. CNN’s Alex Castellanos argued back against Dyson’s fear-mongering on Brexit, explaining that it was “not a crisis” as the media has spun it, adding that Donald Trump’s comments about “building a wall” were about protecting national interests in the same way that Brexit was. Castellanos and Susteren argued with Dyson that only the “elites” were whining about how awful Britain’s decision was.

“But it’s interesting you keep calling it the elite,” Dyson stated, turning to Castellanos and Van Susteren. “This is the Martin Luther King Jr. idea that all Americans deserve a crack at what it means to be, having resources in your own home and in your own state and in your country. So this elitism is a red herring.” Dyson added that Brexit revealed the same “sense of panic” coming from Trump voters that brought out “the worst instincts” in American voters. Clinton, “by contrast,” Dyson stated, held "greatness" in her "continuity” and “common sense.”

MICHAEL ERIC DYSON:  What you're underplaying here is the sense of panic that we saw with Brexit. But that we also see in the same population of people that Donald Trump draws to himself. So it can't be denied that he amplifies some of the worst instincts and some of the more irrational, uh, if you will, tendencies in American politics. I think, once, in sharp contrast to Hillary Clinton, whatever negative she may possess, what the greatness of her continuity is, it’s common sense, it’s  rationality, it is not off-the-cuff remarks and attempts to demonize other populations. 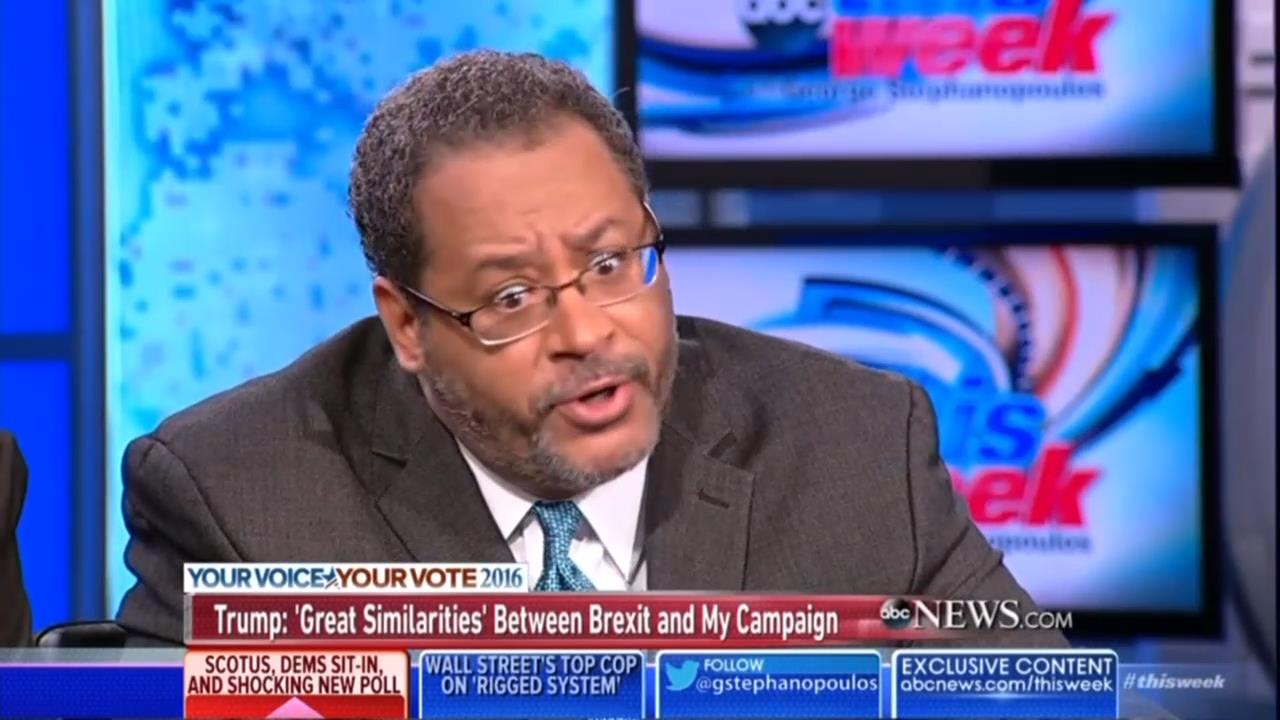 FNC’s Greta Van Susteren responded, “An awful lot of Americans don't agree with that.” But Dyson shot back, going further in claiming that Trump’s nationalism appealed to a “white racist supremacist nationalism.”

DYSON: Donald Trump's nation doesn't represent all of us. He wants to ban Muslims. He wants to keep immigrants out. He wants to build a wall. And look, at his rallies, when black people are pushed around, he then says, I will pay for the legal fees. I’m telling you, Donald Trump amplifies the worst instincts. His nationalism is really a white racist supremacist nationalism that reeks terror on the American democratic experiment.

He added, “The bottom line is,Hillary Clinton stands for the amplification of the best ideals that have motivated the American democratic experiment from the beginning. Donald Trump trumps those.”

Just a week ago, Dyson, in an article for the New Republic, bemoaned, “We must begin to take our stand against Trump and the malignancy he represents” telling readers they had a “moral obligation” to protest Trump at the RNC Convention.