MSNBC's Reid Outraged That Wis. College Kids Have to Prove Residence to Vote

Discussing the Badger State's newly-implemented voter ID law on tonight's Hardball, MSNBC's Joy Reid was perplexed as to why student IDs for University of Wisconsin students are insufficient to establish residency for voting in the state's elections.

There are "180,000 students in the University of Wisconsin system, the ID they go to school with is not good enough" for voting purposes, she groused. "They have to go get additional ID, and then they have to prove they're enrolled! It's targeting students!"

This line of argument frequently rears its ugly erroneous head on MSNBC, so, here we go again. Let's look at how the University of Wisconsin, Madison's student ID card – called the Wiscard – works.

To even GET a Wiscard in the first place, you need, you guessed it, a valid government-issued ID like a driver's license, state-issued ID card, passport, or similar document.

What's more, while the Wiscard has an expiration date, a photo of the bearer of said ID, and a serial number,  it doesn't include any residency information or denote whether the bearer is or is not a U.S. citizen. It makes perfect sense as to why it's ineligible to confirm residency and citizenship, both needed for voting in Wisconsin in a federal election.

Consider that the University of Madison, Wisconsin alone has some 4,000 international students and historically it has allowed more than one-quarter of its total enrollment to go to out-of-state students. To simply allow a student ID for voting at a polling place on campus would obviously present all kind of vote-security issues.

Moments before Reid leveled her complaint, fellow liberal panelist John Nichols of The Nation magazine, also complained about the voter ID law and "the limiting of early voting in Wisconsin" which "has just made it so much harder [to vote]." Nichols laid blame at the feet of the Republican legislature and Republican Gov. Scott Walker.

But while Nichols may be annoyed at the time allotted for early voting, the fact of the matter is there are plenty of reliably "blue" states, including ones that have upcoming Democratic primary contests, which have NO early voting at all, states like Connecticut, New York, Pennsylvania, and Rhode Island.

[That last one, by the way, Rhode Island, has a photo ID law – albeit not as strict as Wisconsin's – passed by an overwhelmingly liberal state legislature and signed by liberal independent Lincoln Chafee, who, you will recall, briefly ran for president in the 2016 primary cycle as a Democrat.]

What's more, also unlike all the aforementioned states, Wisconsin has "no-excuse" absentee balloting, meaning one can obtain an absentee ballot and vote by mail without listing a reason why you think you'll be absent from the polls on Election Day.

In other words, avoiding long lines on election day or in early voting queues is as easy as mailing in a form requesting an absentee ballot. 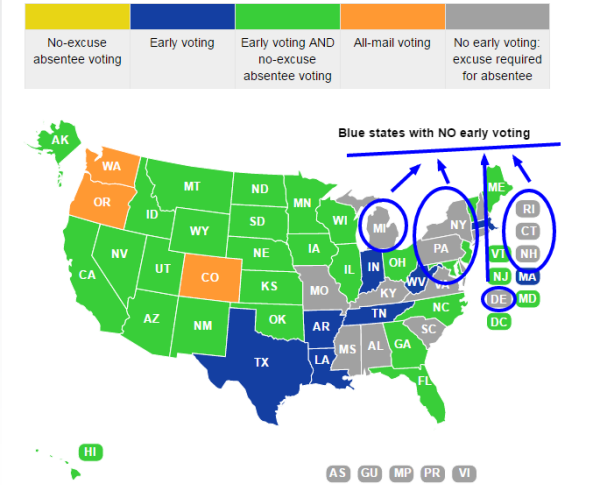