On Monday night, a grand jury in Ferguson, Missouri found no probable cause to indict Ferguson Police Officer Darren Wilson for the shooting death of Michael Brown. Following the grand jury’s ruling, the “big three” (ABC, CBS, and NBC) all broke from their regular prime time programming to announce the decision. Unlike ABC and CBS, NBC Nightly News anchor Brian Williams failed to mention any of the actual facts of the case or legal rationale for the grand jury’s decision when he expressed his dissatisfaction with the case’s outcome.

During NBC’s coverage, Brian Williams ignored all of the actual details of the case and even suggested that despite the violence in Ferguson “the bottom line is, this grand jury sitting 25 days, failed to come up with charges after 70 hours and 60 witnesses in all.”

Williams opened his broadcast by declaring "The grand jury in Ferguson, Missouri has failed to come up with an indictment for the police officer in the shooting of the unarmed black teenager Michael Brown."

A short time ago, the grand jury found no probable cause to indict Ferguson, Missouri police officer Darren Wilson. He will not face criminal charges. After the decision, attorneys for Wilson put out a statement that says, in part, “law enforcement personnel must frequently make split-second and difficult decisions. Officer Wilson followed his training and followed the law.”

ABC’s Dan Abrams went even further in his analysis:

Why is that important? Because you’ve got a lot of Michael Brown supporters talking about all of the eyewitness testimony. You heard the prosecutor there saying yes, there was eyewitness testimony, but it was belied and it was contradicted by the physical evidence.

Given that both ABC and CBS reported on the actual facts of the case following the grand jury’s ruling, Brian Williams’ decision to ignore these details altogether and instead display his disappointment at the ruling exposes an even greater contrast surrounding the immediate post-grand jury coverage of Ferguson. 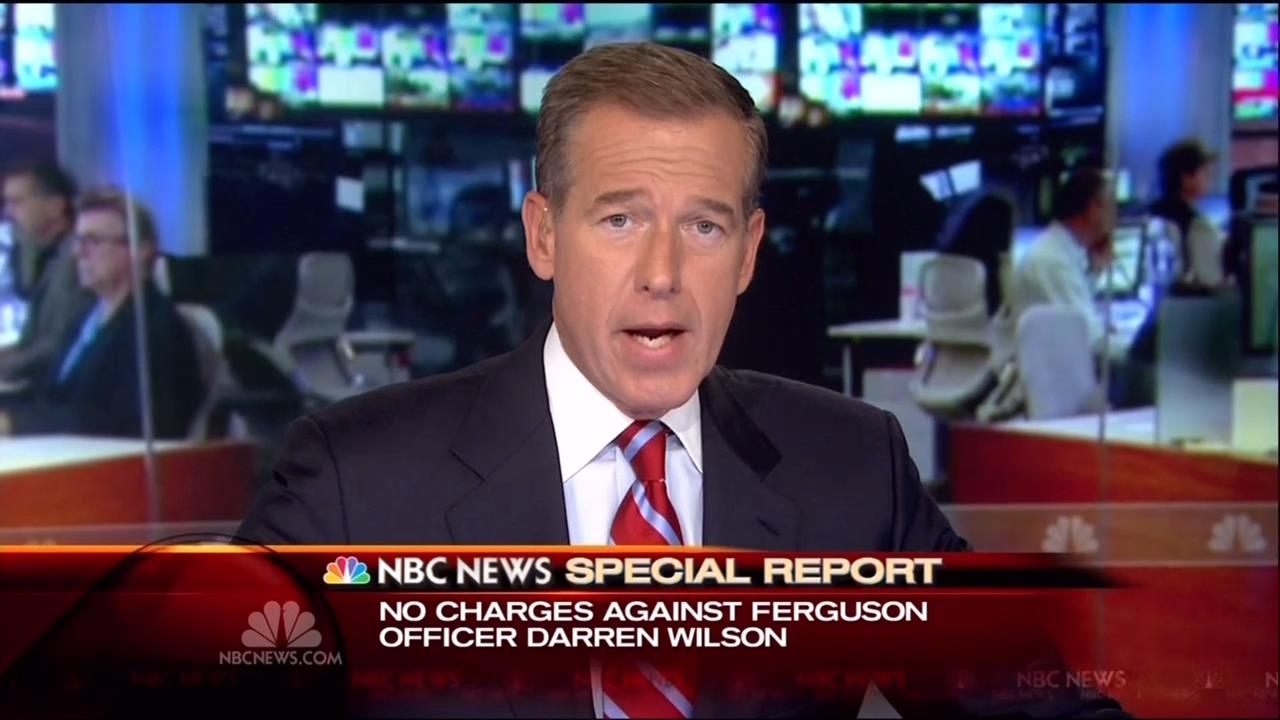 BRIAN WILLIAMS: The grand jury in Ferguson, Missouri has failed to come up with an indictment for the police officer in the shooting of the unarmed black teenager Michael Brown. This is a live look at the situation in the streets of Ferguson, Missouri. Hard to tell or assess from any given vantage point exactly what is going on. We've seen one police car abandoned and busted up a bit in the past few minutes. People are gathering. It's a cold night in Ferguson the 40s as opposed to the long, hot summer nights we saw there, this from a few minutes earlier. And let's go to Miguel Almaguer. We're about to hear from the president from the White House who’s going to speak for a few minutes on the situation in Ferguson. Again, these are potentially alarming pictures. We don't want to draw too much inference from one scene tonight on one street in Ferguson. Miguel, how is it where you are?

MIGUEL ALMAGUER: Brian, certainly the scene is a bit different here. We're just a few blocks from where Michael Brown was shot. There are no protesters here though we have seen crowds beginning to gather. But we do have reports that this scene has gone not just from tense outside the Ferguson Police Department but to volatile. Police have confirmed that shots have been fired in that area. Police also confirm that they are responding to threats of to people looting and they’re also threatening to make arrests. As you can see from many of these live pictures here, the situation seems to be unraveling quite a bit near police head quarters. We've been there over the last several nights where protesters have gathered every day. Those crowds much bigger tonight. You can see police are making a line here. Brian, back to you.

WILLIAMS: Miguel, thanks. Here is the president. 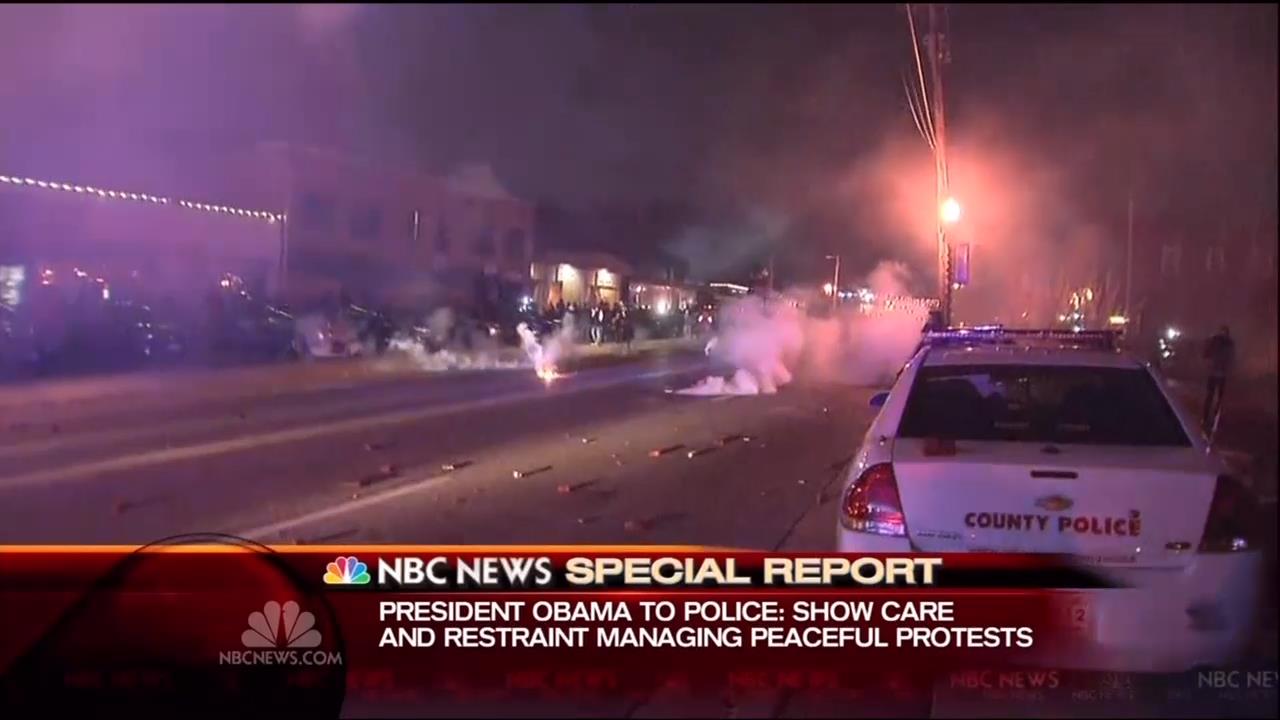 WILLIAMS: President leaving the lectern in the West Wing briefing room quite literally as the president spoke, we saw the first street fill with smoke in Ferguson. We saw the first minor brush fire break out after a wayward canister of tear gas. We saw the first tear gas fired in Ferguson and there you see it again, we saw the return of police armored vehicles from St. Louis county with gun turret structures on the roof that were built for this nation's dual wars of well over past decade. So, this is the situation we're looking at. Difference is, this is a cold night in Ferguson, Missouri. Metropolitan suburb of St. Louis as opposed to what we were just through this summer.

But this is some of the same real estate we saw last time that was a red road flair you just saw outgoing there. That kind of thing happens. Police this time are ready. Peace-loving people are hoping to keep the lid on tonight in Ferguson, Missouri. You heard the president there say the news media play a role in not hyping this up even further. You also heard the president, quote the Brown family tonight. They are asking, let's not answer violence with violence. But the bottom line is, this grand jury sitting 25 days, failed to come up with charges after 70 hours and 60 witnesses in all.

SCOTT PELLEY: This is a CBS News special report. I'm Scott Pelley. For those of you watching CBS prime time programming, it will continue shortly, right where it left off. But right now we're about to hear from President Obama about tonight's grand jury decision in the fatal shooting of Michael Brown. A short time ago, the grand jury found no probable cause to indict Ferguson, Missouri police officer Darren Wilson. He will not face criminal charges. After the decision, attorneys for Wilson put out a statement that says, in part, “law enforcement personnel must frequently make split-second and difficult decisions. Officer Wilson followed his training and followed the law” end quote. Mark Strassmann is at the courthouse in Clayton, Missouri. Mark, what are you seeing out there?

MARK STRASSMANN: Well, the crowd has finally started to disperse here Scott. About 150 people were out here. From a community anxiety standpoint, this no indictment is probably worst-case scenario. Protest was probably inevitable no matter what the grand jury decided but no indictment is bound to rattle and rile the angriest and most resentful protesters out here. And the challenge going forward will be whether the crowds that are going to gather today and tomorrow and the days after really heed the call from so many people, from the governor, mayor and Michael Brown’s parents to have peaceful protests, respectful protests, and that is going to be the challenge and the wonder over the next few days, Scott.

PELLEY: Mark, thank you very much. We are looking at a live picture of the White House briefing room. We’ll expect the president to be coming around the corner at any moment. And here is the President of the United States.

Pelley: The President of the United States live in the briefing room at the White House calling for calm in Ferguson. The president said anger was an understandable reaction, but he said that all sides, including law enforcement and the protesters, should remain calm. Now, these are pictures that we recorded over the last few minutes of protesters rocking the police car and, apparently, the police firing a tear gas remade, several -- tear gas grenades at the crowd. This is in Ferguson just several minutes ago.

The protesters, by and large, over the last hour -- that is the period of time since the announcement -- over the last hour, what we have seen has been calm, but there has been some vandalism of police cars, some tear gas fired. It will be a tense evening in Ferguson. Headline of the hour, a grand jury has declined to indicted Ferguson, Missouri police officer Darren Wilson in the fatal shooting of Michael Brown.

GEORGE STEPHANOPOULOS: And there you have it. St. Louis county prosecutor Robert McCullough saying the grand jury found now probable cause to charge Officer Darren Wilson with a crime. I’m here with Dan Abrams. He said every person on the grand jury went through every piece of evidence, listened to every hour of testimony. Their job was to separate fact from fiction and decide whether Officer Wilson was doing his job or committing a crime.

DAN ABRAMS: Right. And this grand jury decided that there was no crime worth trying. Remember, this grand jury deciding, do we send this to trial for a trial jury to decide guilt or innocence. This grand jury determining there's not even enough evidence to send this case to trial. Now you heard the district attorney there comparing the eyewitness accounts to the physical evidence. Why is that important? Because you’ve got a lot of Michael Brown supporters talking about all of the eyewitness testimony. You heard the prosecutor there saying yes, there was eyewitness testimony, but it was belied and it was contradicted by the physical evidence.

STEPHANOPOULOS: And we'll see what the reaction is like tonight and in the coming days. Dan Abrams. Thanks very much.