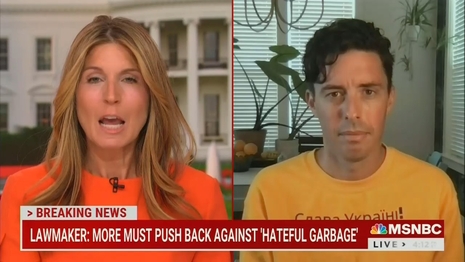 Governor Ron DeSantis and Tesla founder/Twitter owner Elon Musk caused liberal journalist heads to explode when they actually dared to stand up for the causes of parental rights and freedom of speech.

MSNBCers were outraged at DeSantis defending the rights of Florida parents in his fight with Disney. Contributor Marc Caputo complained there was a “mafia feel” to DeSantis’s tactics,” while MSNBC host Nicolle Wallace disgustingly compared the “inhuman” GOP governor’s actions to those of Russian soldiers who “rape childen” in Ukraine.

For MSNBC host Joy Reid, Musk’s acquisition of Twitter wasn’t about free speech, it was all about spreading anti-semitism and “misogyny” because the South African-born Musk “misses the old South Africa in the 80s.”

The past couple of weeks also saw Hollywood elites get into the act with Comedy Central correspondent Jordan Klepper comparing authoritarian Hungary to Florida and film director Rob Reiner hate-tweeting: “A vote for Republicans is a vote to destroy Democracy.”

The following are just some of the most outrageous outbursts from liberal journalists and celebs from the past few weeks:

“Inhuman” DeSantis, Youngkin Like Russians Who “Rape Children” in Ukraine

“I worry that in covering [Virginia GOP Governor] Glenn Youngkin and his politics of parental choice, all the focus was on how well it worked. And even in our conversations about [Florida GOP Governor Ron] DeSantis; it’s about how well they’re serving him. The truth is dehumanization as a tactic for politics is from war. Dehumanization is a tactic that’s being used right now. Russians get their soldiers to rape children by dehumanizing them. Dehumanization as a practice is a tactic of war. It’s being deployed in politics and people like you and I sometimes lose the plot and admire its effectiveness….That dehumanization has a cost right now!”
— Host Nicolle Wallace on MSNBC’s Deadline: White House, April 20.

Correspondent Marc Caputo: “This, you know, to a degree, especially when you talk to critics, has a bit of a mafia feel, which is, ‘Nice theme park you have there, shame if something happened to it.’”...
Host Chuck Todd: “A larger question here. Is Florida a good place to do business if you’re a private corporation or is it only a good place to do business if you’re a private corporation that shares the ideology of the Republican governor?...As many of us analysts have been saying for a couple of years now, small-government Republicanism is dead. It is strong government, that is what the ideology on the right is these days.”
— Discussion on Florida state house voting to pass a bill that will strip Disney World of its special self-governing status after Disney opposed parental rights legislation, as aired on MSNBC’s MTP Daily, April 21.

“If you are a pro-freedom of speech, against canceling, pro-business Republican, I don’t know how you justify hostage-taking. Political hostage-taking and political blackmail against a corporation [Disney] for speaking up about a concern of their employees….It’s such insanity.”
— ABC’s The View co-host Ana Navarro on CNN Newsroom, April 23.

“Today ‘Baby MAGA’ [Florida GOP Governor Ron DeSantis] signed a bill that allows him to create his own private police force that is tasked with pursuing alleged election law violations. Just lovely, the ‘Big Lie’ will now have its own battalion of goons. I wonder who they’ll go after first. I think you can guess….He’s taken away the ability of African-Americans to vote and he passed this police force that you know is gonna be sicced on black Floridians to intimidate them out of being able to vote.”
— Host Joy Reid on MSNBC’s The Reid Out, April 25.

“This mis-use of Black boys is tantamount to child abuse. I would really like to hear the back-story on who these kids were and how they wound up at a DeSantis event. Given how anti-Black DeSantis is, using Black children this way is extra sick.”
— April 22 tweet by MSNBC host Joy Reid in response to a picture of black children holding up anti-Critical Race Theory signs at GOP Florida Governor Ron DeSantis event.

Elon Musk Misses the Days of Apartheid, Wants To Bring It Back on Twitter

Contributor Jason Johnson: “You have politically minded people like Elon Musk who are trying to dominate public discourse around the world and governments need to get involved.”...
Host Joy Reid: “They have been described as being on the outside of the culture looking in through the glass, but they don’t just wanna come in. They wanna come in and be able to punch people in the face and walk around and laugh about it and then not have anyone be able to stop them….There was a time when people had the double hashtags around their names because they were Jewish and right-wingers were saying ‘get in the oven’ any time you made any benign comment on Twitter. They attacked women. You know, the misogyny was crazy on Twitter for a while. Elon Musk, I guess he — you know — misses the old South Africa in the 80s. He wants that back.”
— Host Joy Reid on MSNBC’s The ReidOut, April 26.

“Advocacy networks [Fox News, MSNBC] are a great business, but CNN is in the business of journalism first.”
— Warner Bros.Discovery CEO David Zaslav in Q&A with investors during the company’s first earnings call on April 26.

Have to Keep “Thugs” Like Trump Away From Border Security

“Democracy Is On the Brink” Thanks to “Radicalized” Republicans

“Our very democracy is on the brink, and how the Times covers that existential threat is of extraordinary importance, especially as crucial elections approach this fall and in 2024. Will the paper’s coverage forthrightly identify the problems posed by a radicalized Republican Party that is increasingly dedicated to lies, bad-faith attacks and the destruction of democratic norms, or will it try to treat today’s politics as simply the result of bipartisan ‘polarization’? Will it try to cut the situation straight down the middle as if we were still in the old days — an era that no longer exists?”
— Washington Post Style columnist Margaret Sullivan in April 24 article “Joe Kahn can be a great New York Times editor, I know him. Here’s why I think he might be the man for this perilous moment.”

Co-host Joy Behar: “Florida Governor Ron DeSantis is punishing our parent company, Disney, for speaking out against his so-called ‘Don’t Say Gay’ law. He revoked Disney’s special status that could cost Florida taxpayers $2 billion. This goes against the GOP’s brand of being business-friendly. Now, can he win this culture war?”...
Co-host Ana Navarro: “It was to penalize and take revenge against Disney for having dared cross a pet legislative cause of theirs. And that is wrong. It’s anti-American. It’s what happens in Venezuela. It’s what happens in Nicaragua. It does not happen in the United States.”
Co-host Sunny Hostin: “I can explain why it’s happening. It’s because bigotry is on the ballot when it comes to Ron DeSantis. Right? That’s what this is about. It’s not anti-Disney. It’s anti-black. It’s anti-gay. It’s anti-LGBTQ+ community. And for some reason, the Republican base responds to it.”
— ABC’s The View, April 25.

“It’s a slide from democracy towards autocracy to go from free to partly free. And basically what happens is they….make voting harder. There’s a lot of gerrymandering. They control the media. Most of the media there is owned by wealthy oligarchs who have connections to the ruling party, and they vilify certain minority groups, the LGBTQ community is being vilified right now to rev up voters and you look at what’s happening in Florida right now and you start to see that thing happening here. And so when you see this democracy slide, in a European country, it’s that frog boiling in water. Democracy is fragile. And so when you’re back here in America, look, it might look a lot like what’s happening there.”
— Comedy Central’s The Daily Show correspondent Jordan Klepper previewing his special on CPAC in Hungary as aired on CBS Mornings, April 20.

From the Mind of “Meathead”

“We’re talking about democracy versus autocracy….That’s one of the reasons [Vladimir] Putin invaded Ukraine….he’s wanting to destroy a democracy....He’s [Donald Trump] controlling every aspect of what he would now call the Republican Party….This is an autocratic movement. So, if you’re voting for Republicans, you’re not voting for Republicans. You’re voting for autocracy....If he [Attorney General Merrick Garland] doesn’t move forward [in indicting Trump], then you have the end of democracy. Because the rule of law means nothing, and the most egregious crime against the United States of America goes unpunished. That means you have no democracy anymore.”
— Director/actor Rob Reiner on MSNBC’s The Sunday Show, April 24.

“It couldn’t be more simple. A vote for Republicans is a vote to destroy Democracy.”
— April 20 tweet by director Rob Reiner.