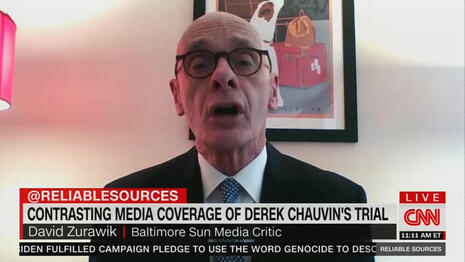 Today we present the WORST OF 2021: The Craziest Analysis Award.

Fox News Is “Danger to Democracy”

“Since Donald Trump, it [Fox News] has completely become a tool of propaganda. We shouldn’t even treat it like the press anymore. They have news in their title which is to mock the name of news. We have to call them out when they do this because we see how incredibly destructive this is to democracy. There is no doubt, Rupert Murdoch and Fox News are now a danger to democracy and they should be treated that way. If they won’t do it in the federal government challenging licenses or any way that they can do it there regulation, we have to keep doing it in the press. We have to keep pounding away at it.”
— Baltimore Sun media critic David Zurawik on CNN’s Reliable Sources, April 25.

Triggered by the American Flag

“I was on Long Island this weekend, visiting a really dear friend. And I was really disturbed. I saw, you know, dozens and dozens of pickup trucks with you know, expletives against Joe Biden on the back of them, Trump flags, and in some cases, just dozens of American flags, which you know is also just disturbing, because essentially the message was clear: ‘This is my country. This is not your country. I own this.’”
— New York Times editorial board member Mara Gay on MSNBC’s Morning Joe, June 8.

“Waukesha will hold a moment of silence today, marking one week since a car drove through a city Christmas parade, killing six people and injuring scores of others.”
— November 28 tweet CNN’s official Twitter account. The driver of the car, who was not mentioned in the initial tweet, was Darrell Brooks, a felon who has reportedly expressed hatred for white and Jewish people.

“Compared with other icons of national identity, it is ambiguous and ambivalent. As familiar to some Americans as the flag, the statue is just as meaningless or foreign to others, a sign without significance, or worse, a symbol of hypocrisy or unfulfilled promises…The noble sentiments of the poem by Emma Lazarus — ‘give me your tired, your poor, your huddled masses yearning to breathe free’ — were all but effaced in the past four years of strident and often violent anti-immigrant sentiment.”
— Washington Post art critic Philip Kennicott in July 3 column “Maybe it’s time to admit that the Statue of Liberty has never quite measured up.”