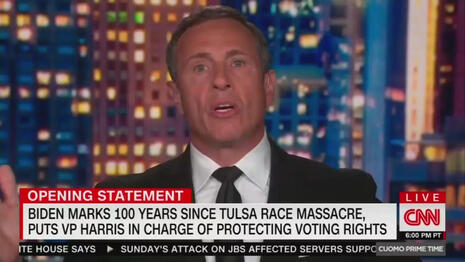 “Here we are on the 100th anniversary of the Tulsa Race Massacre, the deadliest attack on black Americans on U.S. soil....And at the same time that we condemn this as obscene, as a reminder of what is wrong, we see in real time today one of the greatest assaults on democracy under way once again targeting minorities. The party of Trump intensifying its efforts to strip people of color of their rights to vote. The boldest attempt since the era of Jim Crow. President Biden drew a through line in Tulsa today….A through-line of hate. A through line means just because there’s not another Tulsa massacre doesn’t mean the efforts are not equally unholy and un-American?”
— Host Chris Cuomo on CNN’s Cuomo Prime Time, June 1.

“Jim Crow is making a comeback, the fictional black-faced character from minstrel shows who came to symbolize second class citizenship for millions of Americans. Jim Crow is also the name used to describe unequal racial segregation rules that banned black people from eating at white-owned restaurants, staying in white-owned hotels, and fully participating in the election process. Now, as hundreds of new proposals to scale back voter participation in elections make their way through state legislatures, the parallels with the past are inescapable.”
— Reporter Joe Johns on CNN Tonight, March 31.

Racist Republicans “Do Not Believe That Everyone Is Created Equal”

“All six conservative Republican-appointed justices uniting to uphold voting restrictions in Arizona that would disproportionately affect voters of color. And that’s because making it harder for people to vote, particularly people of color and young people, is the thing that the conservative movement is animated right now. It’s what they are radicalizing on….It’s because they and all other parts of the right are working in tandem against America’s multiracial democracy.”
— Host Chris Hayes on MSNBC’s All In, July 1.