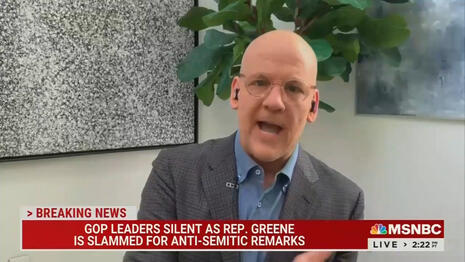 Of course, every year there is way too much bias for just one category. So Baker led a panel of NewsBusters editors to break down the Worst of 2021 into seven additional categories (The Damn Those Conservatives Award; The GOP Wants To Bring Back Jim Crow Award; The Joy of Hate Award for Joy Reid Rants; The Praising and Protecting Old Joe Award; The Media Heroes Award; The Craziest Analysis Award and the Celebrity Freak-Outs Award).

“What is the Republican party? It’s now its basest part of its base, and the basest part of its base is animated by hate. And it’s very hard to make a distinction between one kind of hate and another kind of hate. If you’re Kevin McCarthy, you start denouncing hate, where are you going to stop? Because once you start to denounce this kind of hate, and you take a stand, you now — you’re now surrounded by all kinds of hate, and the only thing that runs the GOP is hate. It’s now a big giant hate machine….That’s all it is — a big, ugly hate machine.”
— MSNBC national affairs analyst John Heilemann on MSNBC’s Deadline: White House, May 24.

Republicans Would Deny Water to Jesus on the Cross

Host Joy Reid: “Do you think that Joe Biden is ready to….get rid of the filibuster?”...
MSNBC political analyst Michael Eric Dyson: “What he needs to do is fill these busters with some fear of the government. These are the kind of people who would pass a law to keep Jesus from be — getting a cup of water while he’s dying on the cross.”
Reid: “Yeah, that is sad but true.”
— MSNBC’s The ReidOut, March 26.

Host Tiffany Cross: “This week, the sole black Republican in the Senate sounded a stone fool when he said this.”
[Clip of Senator Tim Scott: “Hear me clearly — America is not a racist country.”]...
Cross: “Tim Scott does not represent any constituency other than the small number of sleepy, slow-witted sufferers of Stockholm syndrome who get elevated to prominence for repeating a false narrative about this country that makes conservative white people feel comfortable….A lesson I’ve learned is: Don’t argue with people Harriet Tubman would have left behind....Perhaps this was merely Tim Scott’s audition to be Sam Jackson’s understudy in the film Django.”
— MSNBC’s The Cross Connection, May 1.

“The Republicans simply want power. They want a….a white nationalist ethno-state. That’s what they want. They’re not subtle about it. Every voting legislation, every war they’ve voted for — that is what they have been about ever since Donald Trump got the nomination. And they don’t care who they have to sacrifice — whether that’s people in central Texas having to die over COVID or police officers in the Capitol — they don’t care who dies. They don’t care if it’s kids in Sandy Hook as long as it is about accruing power to a white nationalist ethno-state.”
— MSNBC contributor Jason Johnson on MSNBC’s Deadline: White House, August 5.

Lying Brian Leaves with One Final Lie: “I’m Not a Liberal”

“I’m not a liberal or a conservative. I’m an institutionalist. I believe in this place and, in my love of my country, I yield to no one. But the darkness on the edge of town has spread to the main roads and highways and neighborhoods, the local bar, the bowling alley, the school board and the grocery store. And it must be acknowledged and answered for. Grown men and women who swore an oath to our Constitution, elected by our constituents, possessing the kinds of college degrees I can only dream of, have decided to join the mob….They’ve decided to burn it all down with us inside. That should scare you to no end as much as it scares an aging volunteer fireman.”
— Anchor Brian Williams’s parting words on his final show as aired on MSNBC’s The 11th Hour, December 9.

Republicans Want to Fellate the Founders and “Rape Democracy”

“If your biggest idea — your biggest problem — is that there is too much democracy, and so, ‘There’s too much voting — we’ve got to crack down on that — too much speech and protest and we’ve got to crack down on that — too much access to information, let’s crack down on that.’...What a punch in the gut. And for a party — the Republican party — that makes pornography of patriotism and practically fellates the Founding Fathers — it is jarring and disorientating to watch them attack America this way….This is what it looks like when you’d rather rape democracy than come up with your own ideas.”
— Host of CNN’s S.E. Cupp: Unfiltered on HBO’s Real Time, April 23.