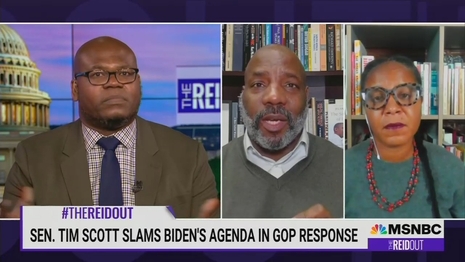 Republican Senator Tim Scott caused media heads to explode when (in his response to President Joe Biden’s address to Congress) he declared “America is not a racist country.” Even though President Biden, Vice President Kamala Harris and House Majority Whip Jim Clyburn ended up agreeing with Scott, liberal correspondents and hosts determined it wasn’t a Republican’s place to say it.

For that and his dismantling of the media’s take that the recently passed Georgia election law was the new “Jim Crow,” the black Republican Senator from South Carolina was disgustingly described as a “token” “tap dancer” who was being pulled by the “strings” to offer up “Republican pablum” and whom Harriet Tubman “would have left behind.”

Prior to Scott’s speech, The Washington Post’s Glenn Kessler embarrassed himself with a lame “Fact Check” aimed at Scott’s inspiring family history.

Hollywood elites also got into the act. ABC’s The View co-hosts Whoopi Goldberg and Joy Behar lectured Scott about America’s history of racism and ABC’s late night talk show host Jimmy Kimmel joked that Scott was out of touch. This was particularly audacious, given that Kimmel, Behar and Goldberg have been caught in blackface scandals.

The following is just a sampling of the most sickening attacks on Scott in the wake of his GOP response to Biden’s address to Congress:

Host Tiffany Cross: “This week, the sole black Republican in the Senate sounded a stone fool when he said this.”
[Clip of Senator Tim Scott: “Hear me clearly — America is not a racist country.”]...
Cross: “Tim Scott does not represent any constituency other than the small number of sleepy, slow-witted sufferers of Stockholm syndrome who get elevated to prominence for repeating a false narrative about this country that makes conservative white people feel comfortable….A lesson I’ve learned is: Don’t argue with people Harriet Tubman would have left behind. And, sure, Tim Scott has spoken out about his encounters with law enforcement….but there are two sides to every token, so thirsty for white approval, this dude actually stood on the national stage to defend the voter suppression law in Georgia...The ability to shame the ancestors and appease the oppressors all in one speech, that’s extreme….Perhaps this was merely Tim Scott’s audition to be Sam Jackson’s understudy in the film Django.”
— MSNBC’s The Cross Connection, May 1.

Host Tiffany Cross: “I want to play a clip from Senator Tim Scott and his completely asinine remarks that he made on the voting law in Georgia….What do you make of those ridiculous comments?”
MSNBC political analyst Fernand Amandi: “Well, you can almost see the strings being pulled behind Senator Scott as he is articulating the very Orwellian talking points that he says where black means white and up means down and left means right.”
— MSNBC’s The Cross Connection, May 1.

“Indefensible” to Say America is Not a Racist Country

“Tim Scott even before this last incident, he wrote a month or so ago that quote, unquote ‘woke supremacy’ was worse than white supremacy or as bad as white supremacy. And it was an astounding thing to say….It’s indefensible to make these comments in the context of how many — I’ve lost track of how many black people have been killed — unarmed black people have been killed this month in encounters with police. And so if he wanted to have this debate about whether or not America is a racist country, I mean, I disagree with him and Kamala Harris. Yes, this is a racist country.”
— The New Yorker writer Jelani Cobb on MSNBC’s The ReidOut, April 29.

Host Chuck Todd: “Amid anger over policing —”
Attorney Ben Crump: “It was a kill shot to the back of the head.”
Todd: “Could this comment from Senator Tim Scott —”
Sen. Tim Scott: “America is not a racist country.”
Todd: “Complicate efforts at police reform?”
— NBC’s Meet the Press, May 2.

“I was surprised, to be honest with you. This [Sen. Tim Scott’s response to President Joe Biden’s address to Congress ] was standard Republican pablum. This could have been delivered by Tom Cotton or Mike Lee. ‘America isn’t a racist country. There’s no racism here.’ I’m not sure what his purpose was. His audience to me appeared to be conservative white Republicans who are angry over certain things, of cancel culture and the same sort of cultural nods that we hear on Fox News. And he was out here to throw them a lifeline. It was disappointing….He came out and lied about the Georgia bill saying ‘It’s easier to vote in Georgia than in New York….I am shocked and a bit embarrassed for him.”
— Host Joy Reid on MSNBC’s live coverage of President Joe Biden’s address to Congress, April 28.

Host Don Lemon: “I want to get your take on what we heard from Senator Tim Scott last night about this country not being racist.”
CNN’s United Shades of America host W. Kamau Bell: “No, don’t do it to me, Don! No!”
Lemon: “Why not? Listen. Let me tell you what he said….He said the original sin isn’t the end of the story, it is a story of redemption. What are your thoughts on what he said? I gather from your reaction there. Go on.”
Bell: “I mean, it sounds like a low-rent ee cummings poem. I don’t know what that was. This country was built on racism. It was built on the genocide on the native Americans and it was built on the transatlantic slave trade for slaving African people….The country we all live in right now, we all, in some way, are benefiting from that. Now, obviously, black folks are not benefiting as much as white folks are but we are all sitting on indigenous land stolen that was from them and it was built by enslaved Africans. That’s the truth. And the fact that we were enslaved and when we got our freedom, our quote/unquote ‘freedom,’ we were never restored whole.”
— CNN Tonight with Don Lemon, April 29.

Co-host Whoopi Goldberg: “Joy, what country is Tim Scott living in?”...
Co-host Joy Behar: “Tim Scott, he does not seem to understand — and a lot of them don’t seem to understand the difference between a racist country and systemic — systemic racism. They don’t seem to get the difference. Yes, maybe it’s not a racist country. Maybe Americans, the majority, are not racist. But we live in a country with systemic racism….The fact that Tim Scott cannot acknowledge this is appalling.”...
Co-host Sunny Hostin: “I was very disappointed in Tim Scott saying that — using these buzz words like socialism. Saying things like you shouldn't really teach white children about racism because it makes them feel like oppressors, um that sort of — this Republican ideology right now. I was disappointed that he said America is not a racist country without also talking about the systemic racism that is plaguing this country.”
— ABC’s The View, April 29.

“After the speech an amazing thing happened, every black Republican Senator got together to let the American people know the Republican Party isn’t racist….And then Tim promptly returned to the sensory deprivation egg he calls home.”
— Host Jimmy Kimmel on ABC’s Jimmy Kimmel Live, April 29. Kimmel didn’t inform his audience that only two of the 50 Democratic senators are black.

“Uncle Tim lost me when he said Biden was dividing us after he had sat quietly while Tang destroyed this country for four years. #BoyBye.”
— April 29 tweet by actress Yvette Nicole Brown.