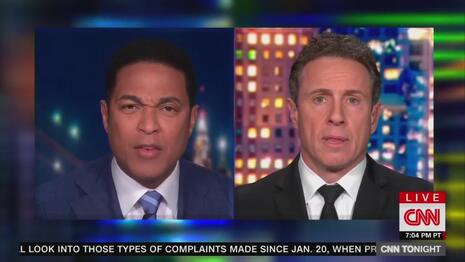 Journalists still have the warm and fuzzies when it comes to Joe Biden. They spent February welcoming the “refreshing” Biden White House by tossing softballs to him in interviews and penning adoring essays about the new president “playing MarioKart with his family.”

In stark contrast, the likes of CNN anchor Don Lemon crushed conservatives as being “horrible” since Ronald Reagan. On MSNBC, proud gun owners were compared to Osama bin Laden.

Sadly, leftist journalists couldn’t let up on their hatred of Rush Limbaugh, even in his passing, as seen here.

The following are some of the worst outbursts from liberal journos and celebrities over the last month:

Republicans Were Always “Horrible,” Even When Reagan Was Around

On MSNBC: Posing with a Gun = You Are Osama Bin Laden

“Last Thursday, [Rep. Lauren Boebert] Zoomed into a virtual congressional hearing with just a mess of guns piled on the bookshelf behind her. AR-15-style rifles, a handgun just laying across a bunch of books….Lots of people immediately noted that the use of guns in that way as props and the implicit threat that comes with them has a….long, not necessarily great history among various movements around the globe. Osama bin Laden, for one liked to pose in front of a bookshelf with a gun prominently displayed. The Irish Republican Army would display guns in its propaganda posters and its murals. Cuban revolutionaries, they posed with guns all the time, too.”
— Host Chris Hayes on MSNBC’s All In, February 23.

“He [Donald Trump] has the Republican party as a personalized power like we haven’t seen. It’s a caudillo, it’s a Caesar, it’s a Fuhrer, we don’t see that in this country. We do now.”
— ABC senior national correspondent Terry Moran on ABC News live coverage of Trump impeachment, February 10.

Trump White House Had “Deadly Ends” for the Press

“And it [the Biden White House] is refreshing. I do kind of put it towards like having a really bad ex-boyfriend. We were getting essentially abused by Kayleigh McEnany for so long. Or, at least, she was calling us fake news and inciting her followers and followers of the President to not only harass us online, but, obviously, go to deadly ends for some people. With death threats.”
— Yahoo! News White House correspondent Brittany Shepherd on CNN’s Reliable Sources, February 7.

“If Republicans can’t do business with Joe Biden — I mean, he’s a centrist, maybe center-left Republican who has made his mark in Washington for decades on reaching across the aisle.”
— CNN Presidential historian Douglas Brinkley on CNN Newsroom with Fredricka Whitfield, February 14.

“Over the years, over your career, you’ve already spent a great deal of time at 1600 Pennsylvania Avenue, except now you’re living there and you’re president. It’s been four weeks. What’s it like? How is it different?”
— CNN’s AC360 host Anderson Cooper to President Biden on CNN Presidential Town Hall With Joe Biden, February 16.

Is It “Unfair” to Be Tough on Biden?

“Are we holding President Biden to an unfair standard? Saying, ‘I thought you were going to go unity,’ when we are not saying that to any Republican who was asking for unity after Democrats called for an impeachment hearing and certainly didn’t ask the President [Trump] to even represent any form of unity in governing the whole country?”
— Host Stephanie Ruhle on MSNBC Live, February 3.

“How did Joe Biden relax during his first Presidents Day weekend as president? By playing MarioKart with his family. During his weekend retreat at Camp David, Biden and his granddaughter Naomi played the racing video game, and he won. Naomi shared a video to Instagram that showed Biden competing against her on the Arcade GP DX machines, complete with chairs and steering wheels. Biden sat on the right as Luigi, and Naomi is Princess Peach on the left, GameRant noted. Despite not being at the same gaming level as his granddaughter, the commander-in-chief came out victorious. ‘Secret service made an exception and let him drive himself!!!!’ Naomi joked on her Instagram Story, since the president is rarely allowed to drive for security reasons, as per CNBC. ‘A little rusty but he still won (barely),’ she added.”
— February 15 online story by Newsweek staff writer Marina Watts “Joe Biden, Playing as Luigi, Wins in Mario Kart Race Against Granddaughter at Camp David.”

Guys Trust Us, We’re Not In the Tank for Democrats

“Republican presidents have an entire right wing media apparatus that supports them. When a Democrat is in charge, that apparatus is on the attack. And then the mainstream media, places like CNN, places like The Washington Post and The New York Times, they interrogate whoever is in power. So they’re also going to be holding a Democratic president to a higher level of accountability and transparency. And so, I think for a lot of folks on the left, that feels like it is unfair.”
— CNN.com columnist and former Cosmopolitan senior political writer Jill Filipovic on CNN’s Reliable Sources, February 28.

Biden Better Beware of The Hot Seat That is The View!

Co-host Whoopi Goldberg: “Today’s Presidents Day, and it’s been a long time coming for all of us here on The View, because we finally have a president in office who we’re honored to celebrate. Plus, our other relationship with President Biden goes way back before he became number 46. Take a look.”
(Montage of Joe Biden appearances)
Co-host Joy Behar: “He’s so, he’s so genuine, and sweet and lovely and funny.”
Co-host Sara Haines: “Good sense of humor!”
Behar: “Everything you want in a man and in a President! You know? He’s great, and he’s right for these times, he’s perfect for these times.”
Haines: “That was cathartic to watch!”
Behar: “I’m glad we have him.”
Co-host Sunny Hostin: “Just decent. Nice.”
Goldberg: “I think that’s why he didn’t win before. Because it wasn’t his time. Because he was going to be needed later on, and so you know. I have to say he’s a great riding buddy if you’re on the train. You know?...I catch up with him back and forth on the train. He’s just a great guy, a real guy.
— ABC’s The View, February 15.

“There’ve been times when you’re asked to play up someone’s flaws or characteristics that are annoying or frustrating or embarrassing. This one feels like a superhero cape I get to don.”
— Former NBC’s Saturday Night Live cast member Maya Rudolph on being asked back to impersonate Vice President Kamala Harris on the show, as revealed in a February 11 Entertainment Weekly article.

Arquette Has One Agenda and That’s Advancing Stupidity

“The GOP has one agenda, And that’s white Supremacy.”
— February 10 tweet by actress Rosanna Arquette.

“Evangelical leaders should themselves be impeached by the Vatican if they themselves don’t follow Nikki Haley’s lead & clearly state they should not have followed Satin [sic] into the bowels of hell. But, perhaps they are too busy at sex parties.”
— February 12 tweet by actor Sean Penn.

“At 54 years it’s my humble belief that what will give us all the sadness and loss that we’ve all lived through meaning is our common humanity, what connects us is greater than what keeps us apart. And the more we include each other, and see each other and hear each other, the faster we will heal our broken hearts and minds. We have a dying mother just like the mother in our story. She is Mother Earth. And we must come to balance with her and honor her. And she’ll heal too. So let’s be courageous together, guys, and….let’s turn the page on the cruel past of this nation. The good news is inclusion and justice and care for Mother Earth is breaking out everywhere. The godly light of decency is breaking through the hideous dark storm we’ve been living through. We are all in this together. We are the ones we have been waiting for so let’s do this now. I love you.”
— Actor Mark Ruffalo in his acceptance speech at the 78th Golden Globe Awards aired on NBC, February 28.

“CPAC, if you don’t know, is an annual event. It’s like Comic-Con for neo-cons and neo-Nazis too.”
— Host Jimmy Kimmel during his monologue on ABC’s Jimmy Kimmel Live!, February 23.