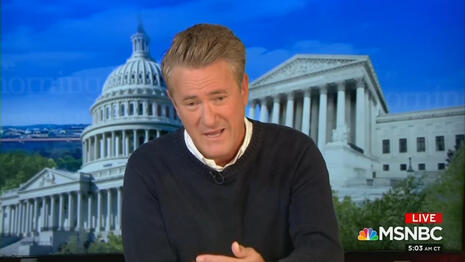 With voters already headed to the polls with early voting, liberal journalists have amped up their rhetoric against Donald Trump this month. The release of Bob Woodward’s new book on the President, provoked CBS’s Tony Dokoupil to compare Trump’s handling of covid to the Nixon-era scandal: “No one died in Watergate.”

[Click the following links to see more of the media’s biased September coverage of Trump’s first debate performance and the passing of Ruth Bader Ginsburg.]

The following is a top 10 countdown of just some of the most outrageous bias by lefty journalists over the last month:

10. A Vote for Trump Is For White Supremacy

“Have you seen this shirt? [Holds up t-shirt that reads ‘The Next VP Will Look Like Me.’]....I can’t wear it, I can’t endorse, but a lot of people feel very good that history is here. And I’m gonna say this: For 23 years, I’ve been at the White House and I’ve seen history, I’ve seen the first black President of the United States of America and I called him ‘Mr. President.’ But if you come there in January, and I get to raise my — please answer my question — if I raise my hand, I get to say ‘Madame Vice President.’ Do you know that sends chills through me? And you look like me! Does that give you chills?...I can’t endorse, but what I say is if I get to say ‘Madame Vice President,’ that’s gonna send chills through me. That’s all I’m gonna say!...Go vote everyone!”

8. Oh Those Dastardly Humans and Their Economies!

“When the world went into lockdown last spring, a brief and beautiful transformation took place. Animals appearing in locations they hadn’t been seen in years. Mountains and skylines revealed after decades of shrouded in pollution. And a remarkable hopeful drop in greenhouse gas emissions, the single largest contributing factor to climate change. This silver lining, however, quickly faded as countries started opening up.”

7. Todd Whines: Trump Has Robbed Press of “Our Power” to Shame

“We all underestimated how to cover this President and how to cover his mischaracterizations and lies….He doesn’t have shame about it. And when we lose our ability to shame a politician we lose a lot of our power. That’s for sure.”

“The crime he [Donald Trump] is deriding is happening on his watch. He is stoking it and using it successfully in many cases to make Americans afraid….He isn’t against violence. He is against black violence. He’s just fine with white violence, it appears.”

“This [Trump tax returns] is really the smoking gun of a pervasively criminal presidency. We have a President of the United States who is a grifter. His family are grifters and this is the definitive evidence of it, but more grievous, grotesque, and dangerous are the national security implications of the New York Times report….This is an unraveling that we now need to do in the press and the Congress of the United States to find out just how great a national security threat to this country our President is.”

4. At Least “No One Died in Watergate”

Co-host Tony Dokoupil: “Your former reporting partner Carl Bernstein of Watergate fame called these tapes, the tapes tied to your book, graver than those Watergate tapes, referring to the loss of life and importance for history. Do you agree with that assessment? Is this graver than Watergate?”

2. “Terrifying” Trump: “Most Frightening Moment In My Life”

“As he lied month after month, his staff remained silent. You see, staying in good standing with Donald Trump ended up being more important to them than saving your life….Six months into this lie, nearly 200,000 American souls are dead. Countless, countless, remain ravaged by the aftermath of this horrific disease. Millions still out of work….Donald Trump says he didn’t want Americans to panic. No, he just wanted to sit by and watch them die.”