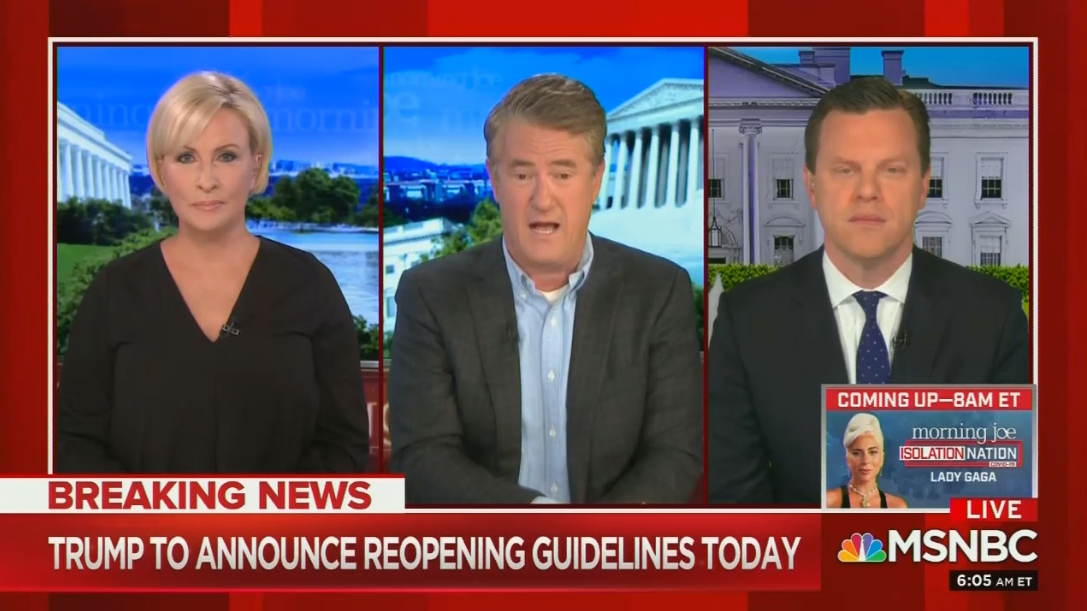 Liberal journalists and hosts exhibited little sympathy for protestors wanting to go back to work as they belittled them as zombies and a “doomsday cult.” The President and conservatives that shared their concerns were derided as “reckless and “dangerous.”

From MSNBC host Nicolle Wallace whining about Donald Trump tweeting “like a punk” while thousands die to her colleague Joe Scarborough cursing Republicans for sacrificing World War II veterans to Wall Street, the following are the 16 worst coronavirus crisis-related quotes by journalists from the past week-and-half.

“This moment is like every other in Donald Trump’s presidency, where it’s about his fragile, teeny-tiny ego, and the vast nation that he leads, and he’s making all his decisions based on press coverage….The difference here….is that people are dying, more than 30,000 people have died. The virus is still spreading across the country and Donald Trump today, like a punk, seemed to tweet about protesters.”

“Donald Trump will not recover from this….How he mishandled the coronavirus. And that’s lives. It’s 40,000 right now. I believe this will be his Waterloo in spades.”

14. Joy Is Getting Cocky

“The truth of the matter is that even if Joe Biden was locked in a trunk in a basement in the middle of the Canary Islands, he would still win this election. That's how bad his opponent is. So I’m not worried about it that much because everybody knows Joe Biden. It’s like having a relative that you haven’t seen for awhile, but you know he’s great.”

“It’s in keeping with his monarchical tendencies here. I think these briefings are really infomercials more than briefings. He is constantly selling his own reaction to the crisis in the face of facts. And I think that ultimately what you’re seeing with the numbers is Americans at some intuitive level understanding that the President is selling them, he’s not protecting them.”

“But does the President not understand that him coming out there every day and acting like a jerk is not going to help him with the American people?....Does anyone have the courage to stand up to this person, to this bully, as we see him in the briefing room to give him the real talk and say, ‘Hey, you need to get out there and tell the American people the truth and stop acting like a big bully?’”

11. Behar: Time to Literally Blow a “Whistle” At Briefings

“Going forward, all of these reporters, every time he lies, they should take out a whistle and blow a whistle so that they would be the country’s real whistle-blowers, or else somebody in the corner should have a pinocchio with a nose growing….This is the worst thing about this presidency, is his lying, because that is what really creates dictatorships.”

“If you said anything nasty about Donald Trump, you don’t qualify for the [re-opening] committee. And that basically guarantees a very low level of competence from that committee. The North Korean-style, you know, loyalty tests are going to be crushing to the competence of any effort going forward.”

Host Joy Reid: “I want to put back up this photo that went viral of those Ohio protesters. A lot of people said it looked like a zombie movie….Sort of like a scene out of The Walking Dead or whatever….What is it that they’re trying to channel here? Is this sort of neo-confederacy?”...

Former Newsweek editor Jon Meacham: “You have some folks on the right who are sensing that this is some global force, and they don’t like things that are outside their borders. ‘America First’ was a phrase that was used by Charles Lindbergh and the Nazi sympathizers in 1939, 1940, 1941 — it became President Trump’s rallying cry — you have that on the right.”

8. Trump To Blame As Much As China

Correspondent John King: “The briefing was breathtaking from beginning to when we dropped out, and at times bordered on dangerous. The President began with a propaganda video.”...

Correspondent Jim Acosta: “That is the biggest meltdown I have ever seen from a President of the United States in my career. I don’t think a reasonable person could watch what we just saw over the last hour and conclude that the President is in control. He sounds like he is out of control. And he was ranting and raving for the better part of the last hour....He became the chaos president, but what the American people want right now, and they're not getting, is a coronavirus president. And a chaos president just isn’t fitting the bill.”

“What we saw yesterday during the briefing, that Monday meltdown, when he played that propaganda video in the White House briefing room, these briefings all together are coming across like something out of Baghdad Bob — Baghdad Bob being the Iraqi military official who was claiming during the Iraq War that the United States was not making their way into the Iraqi capital. The President is sounding like very Baghdad Bob-like in the way that he’s assigning blame to everybody but himself. He is not taking any responsibility for this.”

“The President of the United States at the moment of this nation’s utmost vulnerability since World War II preached and incited to the people of this country, insurrection. It’s madness and a degree of recklessness that’s really inconceivable...We have a president who says ‘I'm not a supply clerk.’ Can you imagine FDR in World War II saying, ‘I’m not a supply clerk?’ There’s something obscene about this.

4. Pinning Pence Down on Lives “Lost” By Administration

“The United States today has more coronavirus deaths than the major countries in Europe combined, more deaths than anywhere...The President did stop travel to the U.S. January 30, but for days and even weeks after that, he said the U.S. is in a good place…. He assured Americans everything is okay. How many lives do you believe were lost as a result of the delay by this administration?”

Former CNN contributor Reza Aslan: “Defying medical advice in order to make some kind of point about their support for Donald Trump — this is the kind of behavior — this cult-like behavior that can lead to….the deaths of thousands of people. It's no longer just a cult of personality….it’s now becoming a doomsday cult.”

2. Electing “Unhinged” Trump Proving to be “Most Reckless Thing” In U.S. History

“In electing Donald J. Trump as President, the American people did the most reckless thing they’ve done in our history. I think the governor of Washington state got it exactly right. It’s unhinged….Fomenting revolutions in blue states with Democratic governors is ...unhinged is the only word for it….I don’t know what mental illness he has, Wolf, but it’s important that we in the press don’t catch it.”

“Finally,” the “Bright Spot” of the Pandemic!

“People in northern India are getting a fresh, if distant, look at what has been shrouded by pollution for decades….the towering Himalayan Mountains...The country has been under lockdown for more than two weeks, and that has dramatically improved the air quality and visibility….There has been a trend of cities worldwide reporting cleaner air since the lockdowns were put into place....Finally, you know, this is a bright spot in this era of pandemic.”

Coronavirus Is the Cure for Climate Change

“If there is a silver lining in coronavirus news, it is this: The economic shutdown is causing at least temporary relief from air and water pollution….Could this be a harbinger of a low-carbon future? Or could economic and political pressure turn the clock back again on climate regulation?...We've got many people who are activists and scientists on this who just hope this is   going to be a turning point….airliners haven’t been flying in the way that they normally do...That’s great news for the planet, great news for us, but, again, is it sustainable?”

For more attacks on Trump and conservatives during the coronavirus crisis, see these previous articles:

CORONA CRAZY: The 12 Most Insulting Attacks on Trump of the Week

CORONA CRAZY: THE 12 MOST INSULTING ATTACKS ON TRUMP OF THE WEEK 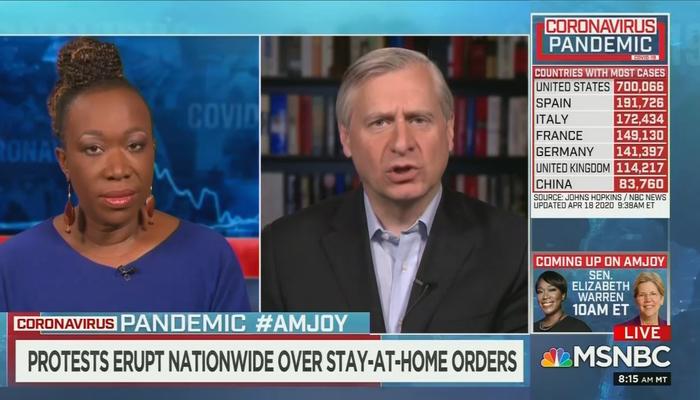 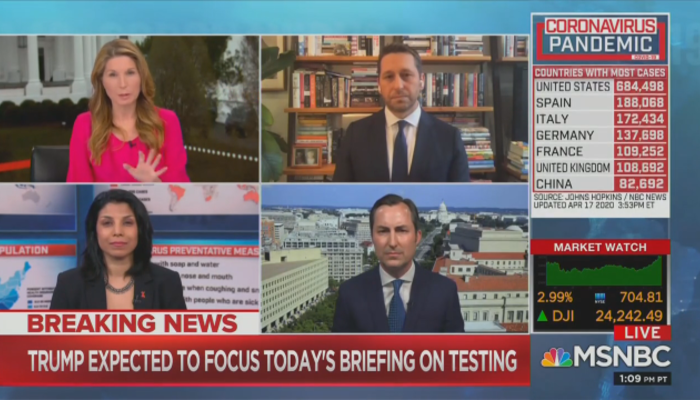 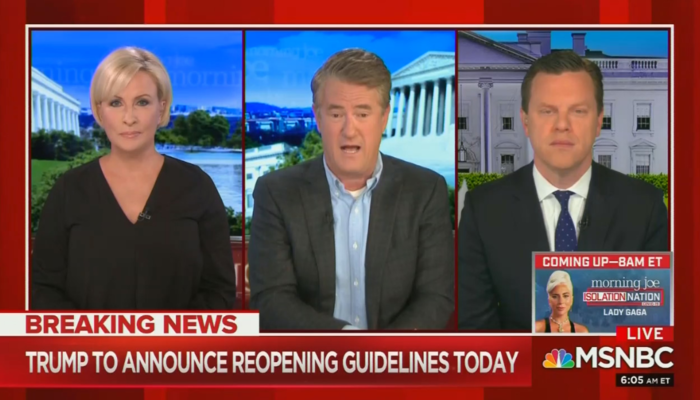 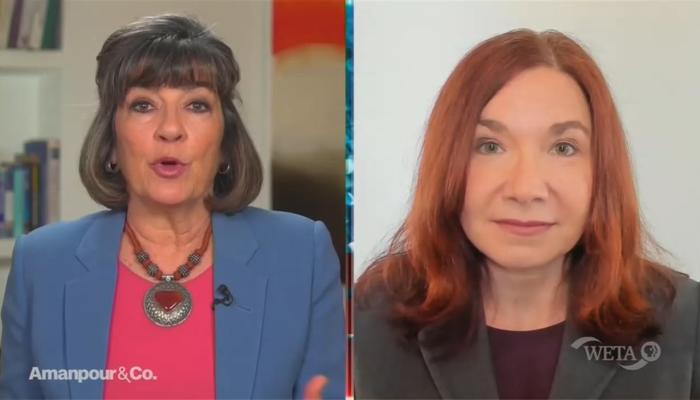 Amanpour Hints Pandemic May Save Lives If It Inspires Climate Reforms