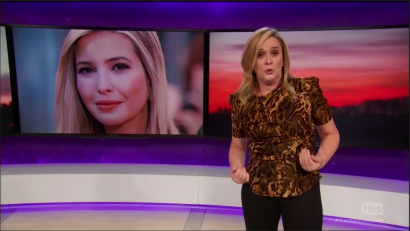 All this week, NewsBusters is recounting the most obnoxious liberal bias of 2018. On Monday, we presented the most outrageous examples of journalists fawning over liberal or left-wing icons; on Tuesday, we showcased some of this year’s nastiest attacks on conservatives; Wednesday, we highlighted the media’s Trump Derangement Syndrome; and yesterday reviewed the most idiotic analysis of the year.

Today, we finish the series with some of the most obnoxious celebrity quotes of 2018. TBS’s Full Frontal host Samantha Bee was so enraged at Ivanka Trump she hurled one of the worst epithets you could at a woman, as she called Donald Trump’s daughter a “feckless” c-word.

Activist and actor Peter Fonda also flipped out as he ranted on Twitter in all caps: “WE SHOULD RIP BARRON TRUMP FROM HIS MOTHER’S ARMS AND PUT HIM IN A CAGE WITH PEDOPHILES.”

Other celebrities, like film director Joss Whedon issued death threats to the President as he tweeted “Die, Don. Just quietly die.” So much for liberal compassion. [LANGUAGE WARNING]

“Ivanka Trump, who works at the White House, chose to post the second most oblivious tweet we’ve seen this week. You know, Ivanka, that’s a beautiful photo of you and your child, but let me just say, one mother to another, do something about your dad’s immigration practices, you feckless c**t. He listens to you! Put on something tight and low-cut and tell your father to f***ing stop it!”
— Host Samantha Bee on TBS’s Full Frontal, May 31. Bee apologized the next day.

“I like Samantha Bee a lot, but she is flat wrong to call Ivanka a cunt. Cunts are powerful, beautiful, nurturing and honest.”
— May 31 tweet by actress Sally Field.

“You guys have got to stop putting Kellyanne [Conway] on your shows. All she does is lie. If you don’t give her a platform, she has nowhere to lie. It’s like that old saying, if a tree falls in the woods, how do we get Kellyanne under that tree? I’m not suggesting she gets hurt. Just stuck. Stuck under a tree.”...
“There’s also, of course, Ivanka. She was supposed to be an advocate for women, but it turns out she’s about as helpful to women as an empty box of tampons. She’s done nothing to satisfy women. So, I guess like father, like daughter.”
— Some of comedian Michelle Wolf’s jokes about White House Counselor Kellyanne Conway and First Daughter Ivanka Trump at the White House Correspondents Association Dinner, April 28.

“C.H.I.P [Children’s Health Insurance Program] has become a bargaining chip, it’s on the back burner while they work out their new tax plans. Which means parents of children with cancer and diabetes and heart problems are about to get letters saying their coverage could be cut off next month. Merry Christmas, right?....[Republicans] let the money for it expire while they work on getting tax cuts for their millionaire and billionaire donors....I’ve had enough of this. I don’t know what could be more disgusting than putting a tax cut that mostly goes to rich people ahead of the lives of children.”
— Host Jimmy Kimmel, while holding his son, on ABC’s Jimmy Kimmel Live!, December 11, 2017.

“More dead children. WE CAN’T CONTINUE THIS MADNESS! WE ARE DONE! We’re done with your—‘the @NRA didn’t pull the trigger’— spin. We are done with your pity, thoughts and prayers. You flooded America with guns. The gun lobby and gun manufacturers value profit over lives. #NoRA”
— May 18 tweet by actress Alyssa Milano, in response to Santa Fe school shooting.

Joss, Secret Service Is on Line One for You

“Donald trump is killing this country. Some of it quickly, some slowly, but he spoils and destroys everything he touches. He emboldens monsters, wielding guns, governmental power, or just smug doublespeak. Or Russia. My hate and sadness are exhausting. Die, Don. Just quietly die.”
— April 3 tweet by director Joss Whedon.

“Dear lord - you took Michael Jackson who was my favourite male singer, you took Whitney Huston who was my favourite female singer, you took Muhammad Ali who was my favourite boxer I just want you to know that Donald Trump is my favourite president. Amen....[Trump] is destroying people family breaking them apart, No mercy ..why should i feel bad this man probably wishes anybody that is not white death. I bet if he can do what Hitler did HE FUCKING WILL … Soooo why should i feel bad before he sends this country too hell? This man is sooo thirsty to start war to kill thousand maybe millions of our soldiers and people from other countries FUCK HIM !!!!! This man have no soul HE DON’T FEEL BAD FOR ME NEITHER YOU!”
— Rapper Cardi B (real name Belcalis Almanzar) in January 17 Instagram post.

Jay-Z: “He’s [Donald Trump] bringing out an ugly side of America that we wanted to believe was gone. And it’s still here and we still gotta deal with it. We have to have the conversation. We have to have tough conversation. We have to talk about the ‘N’ word. And we have to talk about why white men are so privileged in this country.”
Host David Letterman: “I completely agree.... And I’ve said this a thousand times. We don’t need any more evidence....Is he a racist, is he not a racist? I’m telling you, you’re having a debate over whether a guy is a racist, chances are that guy is a racist....The humanity that this country has to represent has been refueled by this dumbass.”
— Netflix’s My Next Guest Needs No Introduction, released in April.

The United States of AmeriKKKa

“The so-called American cradle of democracy, that’s bullshit. The United States of America was built on the genocide of native people and slavery. That is the fabric of the United States of America. As my Brooklyn brother Jay-Z would say, facts.”
— Film director Spike Lee discussing his new film BlacKkKlansman at the Cannes Film Festival, May 14, as reported by Vulture.

“WE SHOULD RIP BARRON TRUMP FROM HIS MOTHER’S ARMS AND PUT HIM IN A CAGE WITH PEDOPHILES AND SEE IF MOTHER WILL WILL STAND UP AGAINST THE GIANT ASSHOLE SHE IS MARRIED TO. 90 MILLION PEOPLE IN THE STREETS ON THE SAME WEEKEND IN THE COUNTRY. FUCK”
— June 20 tweet from actor/director Peter Fonda. First Lady Melania Trump asked the Secret Service to contact the actor. Fonda deleted the tweet and eventually apologized.

Film Director Rob Reiner: “This is about racism. This is pure and simple racism – that’s all this is. He’s hoping that the people who support him will be ginned up and running to the polls to make sure that brown people don’t come into America.”...
Producer Michele Reiner: “My mother was in Auschwitz. She got separated from her entire family – lost her entire family....They follow the exact pattern that Hitler has  – I hate to say it – with the propaganda, even down to the Red Cross went into Auschwitz. They cleaned it up for two days – it looked fine –  they went back – they said everything seems fine there....To quote that new book that just came out, he is evil. He is evil.”
— MSNBC’s AM Joy, June 24.

Hollywood Settles It: No More “Debate,” Trump Is a Nazi

“He’s a Nazi. He wants no judicial process. He kidnapped children and commits acts of violence for political gain and to support his racist views. He admires violent dictators. Trump is a Nazi. The debate is over. Soon we will have proof he is a Nazi supported by the Russians.”
— June 25 tweet by director Judd Apatow.

End “Hitler” Trump, While You Still Can

“If Trump wins he’ll cast it as a complete endorsement of his most undemocratic behavior. If you’re 18, and that happens, you stand a very real chance of not living in a western style democracy for part or all of your life. Yes – it can happen here....Take a look at this [picture on screen of crowd with Nazi salutes] This isn’t Nuremberg in 1934. It’s Madison Square Garden, in liberal New York City, in 1934. And here’s the Garden in 1939 after Hitler had already done some awful things, and yet 22,000 Americans were cheering him on. I’m not saying Trump is Hitler. Hitler volunteered for the army. But he is a want to-be dictator. And he does have a knack of getting what he wants to be. So mark Tuesday, November 6th down. Mark it in your calendar like you’re Brett Kavanaugh planning to get shitfaced. Because Tuesday is win or go home for democracy.”
— Host Bill Maher on HBO’s Real Time, November 2.

America Already “Worst Abusers,” But “Twisted” Trump Has Made Us Worse

“We are already among the worst abusers of Human Rights on this earth. And we are inches away from being investigated by The Hague for our newly formed Fascist ways. All ths in the 510 days of his twisted regime.”
— June 18 tweet by actor Ron Perlman.

Kavanaugh’s Deal with the Devil

“[The Trump administration] is going to get to confirm Kavanaugh and that will give every anti-choice Republican a giant boner. This is a position for life, y’all. They want to push it through, and if it goes through, it’s going to affect every vulnerable person in America negatively until the day he dies, until the Devil comes to collect his soul.”
— Actress/comedian Sarah Silverman on her Hulu show I Love You America, September 6.

“Alcoholism stunts your emotional growth so if you start drinking alcoholically as a teenager you stay a teenager emotionally until you deal with it. Explains a lot about Brett Kavanaugh. From his combative behavior yesterday to his unusual bond with teenage girls basketball teams.”
— September 28 tweet by comedian/actor Tom Arnold.

“It’s no longer the Republican Party to me. It’s the Rape Party.”
— October 4 tweet by actress Molly Ringwald.

“I’m trying to hold onto my personal rights so that you can have the rights you want. See? Because if you take mine, I feel like you’re the one with the problem. If you take my right away from me, to judge what I do for my family and my body, I got a little problem with that. You got a problem. You don’t want people to take your guns? Get out of my behind! Get out of my vagina! Get out!”
— Co-Host Whoopi Goldberg on ABC’s The View, June 28.

Rosie O’Donnell: “When he was elected, what I wrote on Twitter was we should impose martial law until we make sure that the Russians weren’t involved in the final tallies of the votes....And people were like martial law, what’s wrong with you? You’re a lunatic.”
Host Nicolle Wallace: “Well, he wants to send the military to the border so – ”
O’Donnell: “I want to send the military to the White House to get him. That’s what I want to do.”
— MSNBC’s Deadline: White House, October 18.

Stop Trump Before There Are Blood-Filled Streets

“This is nascent fascism. We always had a turnkey totalitarian state – all we needed was an excuse and all the institutions were in place to turn this into pure fascism. If we don’t stop [President Trump] now, we will have a revolution for real. Then there will be blood in the streets.”
— Babe actor James Cromwell in October 29 Variety article.