NewsBusters Year-in-Review: The Most Outrageous Quotes of 2017 Part II 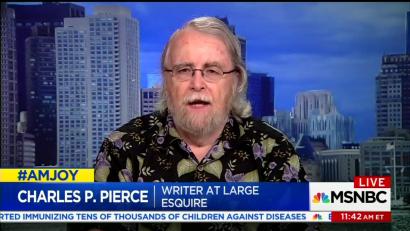 All this week, NewsBusters is recounting the most obnoxious liberal bias of 2017. Yesterday, we presented the most outrageous examples of journalists fawning over liberal or left-wing icons; today’s installment showcases some of this year’s most rancid quotes attacking Republicans or conservatives, NOT named Donald Trump. (The media’s attacks on the President will be featured on Wednesday.)

The shootings in Las Vegas of country music fans and Republican Congressman Steve Scalise on a baseball field in Alexandria, Virginia brought out the media’s hatred for the NRA and gun-owners. Esquire columnist Charles Pierce disgustingly called the Vegas attack a “blood sacrifice” to the Constitution. Former CNN host Piers Morgan tweeted “The NRA is killing America.”

After he had just been shot by a Bernie Sanders-supporter, Congressman Steve Scalise’s politics was still fair game for MSNBC host Joy Reid, who condemned: “He voted for the House health care bill which....would gut health care for millions of people...because he is in jeopardy....are we required in a moral sense to put that aside at the moment?”

Massacre of Country Music Fans = “Blood Sacrifice” to the “Constitution”

“The Constitution is not a pact with the devil, nor is it a suicide pact. It is a formalized, legalistic ritual of blood sacrifice. There are some things that we as a society, alas, must tolerate in order to stay true to our founding beliefs and to remain free. Schoolchildren shot to pieces is one of those things. The massacre of country music fans is another one of those things, the 273rd blood sacrifice to that one provision of the Constitution this year.”
— Esquire columnist Charles Pierce in October 2 column “If Newtown Wasn’t Enough, Why Would Las Vegas Be Enough? Our leaders are afraid to tolerate limits on Second Amendment ‘freedoms.’”

“The @NRA is soaked and bathed in blood. How do its adherents sleep at night?”
— November 5 tweet by MSNBC host Joy Reid after Sutherland Springs, TX shooting.

“What’s more harmful: Putting millions already on the margins more at-risk via draconian policies, or shooting a racist lawmaker in the hip?”...
“For violent resistance to work it’d need to be organized. Individual acts can be understandable, but likely counterproductive/ineffective.”
— June 14 tweets from Huffington Post writer Jesse Benn. Posted on the same day a shooter, who supported Bernie Sanders, attempted to kill Congressional Republicans, including Rep. Steve Scalise, at a baseball park in Alexandria, VA.

Should We Let Shooting Get In The Way of Calling Him a Hater?

“Obviously it’s a delicate thing because everybody is wishing the congressman well and hoping that he recovers, but Steve Scalise has a history....we’ve all been forced to sort of ignore on race. He did come to leadership after some controversy over attending a white nationalist event –  which he says he didn’t know what it was. He also co-sponsored a bill to amend the Constitution to define marriage as between a man and a woman. He voted for the House health care bill which....would gut health care for millions of people, including three million children. And he co-sponsored a bill to repeal the ban on semi-automatic weapons. Because he is in jeopardy and everybody is pulling for him, are we required in a moral sense to put that aside at the moment?”
— Host Joy Reid on MSNBC’s AM Joy, June 17.

Host Joy Reid: “It’s in the old Confederate states where they have refused to put about four million people onto the Medicaid rolls out of this sense that this is sort of brown people who just want to take, and that is the reason they want to have it expanded.”...
Daily Beast columnist Dean Obeidallah: “This [repealing ObamaCare] will kill people. Why not just call it ‘Death to Poor People’? Maybe more people in the Freedom Caucus will actually support it then. Because fundamentally that's what they’re doing.”
— MSNBC’s AM Joy, April 29.

Warning: Mitch McConnell May Be Hazardous to Your Health

“If you are an at-risk American, if you are the poor or the elderly or somebody with a pre-existing condition or somebody who relies on a rural hospital, Mitch McConnell is more of a danger to your life right now than Vladimir Putin is. If he gets this thing through, it attacks so many people in this country who will end up eventually without health care and without health insurance.”
— New York Daily News columnist Mike Lupica on MSNBC’s Live with Stephanie Ruhle, July 10.

“Paul Ryan has been dreaming about cutting this program [Medicaid] since he was sitting – hanging out at keggers in college –  he’s told that story. What kind of a monster is he? Who dreams of cutting Medicaid? They act like people are merely takers –  they don’t act like they understand hardship of any kind. Paul Ryan –  who actually got Social Security as a survivor when his father died, God bless him. I mean, the cruelty....it’s the only word we can use –  the cruelty of this bill is beyond belief.”
— MSNBC political analyst Joan Walsh on MSNBC’s The Last Word, June 23.

Co-host Joy Behar: “How is [removing birth control employer mandate from ObamaCare] it different from the Taliban I’d like to know?”...
Co-host Whoopi Goldberg: “I said this before. I’m going to say it again. With all these rollbacks and all the things we hear, what's the difference between us and the people we’re fighting?”
Behar: “Nothing.”
Goldberg: “What's the difference?”
Behar: “That’s what I’m saying. It’s to keep women down also. Let’s not forget they are trying to keep women in their place. Barefoot and pregnant.”
— ABC’s The View, June 1.

“America is, at its core, a nasty, venal, selfish and racist culture....By and large, though, the long arc of history has generally bent toward crushing the necks of poor, weak and, especially, African-American citizens....Trump supporters still believe that America is ruined, soiled, tainted and irredeemable. No matter what America says to Trump now, his voters know that she dated a black guy for eight years and she liked it, and she still thinks about him....[Trump is] a temper tantrum from an electorate that votes out of spite, not hope; anger, not ambition; disdain, not destiny. They just want to make sure they go down swinging, and if that drives the rest of the world off the cliff, so be it. At least the black guy won’t be at the steering wheel.”
— MSNBC contributor Jason Johnson in a May 24 article for The Root.

“I think what happened is a continuation of the Republican determination to cut out Hispanic votes on their side, for as long as we can see....For a long, long time, the Republican Party has been declaring war on Hispanics in this country.”
— Former NBC Nightly News anchor Tom Brokaw on MSNBC’s Morning Joe, September 6.

“Of all the actions Trump has taken, none has been as cruel, thoughtless or divisive as deporting hundreds of thousands of young people who’ve done nothing but go to school, work hard and present themselves to the government. The party of Lincoln has become the party of Charlottesville, Arpaio, DACA repeal and the Muslim ban. Embodying the very worst sentiments and driven by irrational anger, it deserves not defense but extinction.”
— Washington Post columnist Jennifer Rubin in September 4 online blog post “Ending DACA would be Trump’s most evil act.”

“When [Roger] Ailes died this morning, he left an America perfectly in his image, frightened out of its mind and pouring its money hand over fist into television companies, who are gleefully selling the unraveling of our political system as an entertainment product....The extent to which we hate and fear each other now – that’s not any one person’s fault. But no one person was more at fault than Roger Ailes. He never had a soul to sell, so he sold ours. It may take 50 years or a century for us to recover. Even dictators rarely have that kind of impact. Enjoy the next life, you monster.”
—  Rolling Stone writer Matt Taibbi in May 18 article “Roger Ailes Was One of the Worst Americans Ever: Fox News founder made this the hate-filled, moronic country it is today.”

“Roger Ailes, the most darkly influential man in American politics over the last 50 years, died Wednesday...The Republican Party Ailes helped build, as an adviser to GOP presidents from Richard Nixon to Donald Trump, and most importantly at alternative-reality network Fox News, is now paying for its reliance on the white cultural backlash Ailes stoked, which led the party to hitch its wagon to the narcissistic rageaholic now tweeting incoherently in the White House. Maybe the death of its intellectual patron, reportedly due to a blood clot after a fall, will serve as a warning to the party: anger, arrogance, and seething resentment of a rapidly changing country can be fatal.”
— Correspondent Joan Walsh in May 18 article for The Nation.