Trump Triggers the Press with His Foreign Trips and Wrestling Tweet 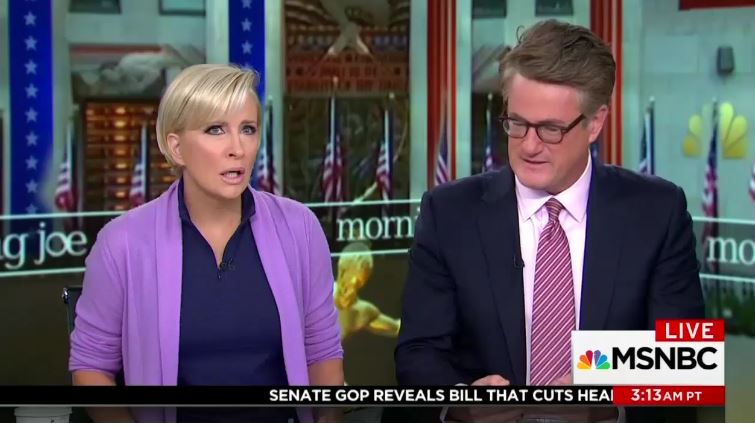 President Donald Trump has a knack for getting under the liberal media’s skin and driving them into hyperbolic criticisms of just about everything he does.

Whether it was tweeting out a goofy video of him wrestling CNN to the ground, or delivering a speech overseas, the press couldn’t contain their overreactions.

Former MSNBC and current GQ host Keith Olbermann called Trump a “treasonous megalomaniac,” the Morning Joe crew made daily comparisons to despotic leaders like Stalin. CNN’s Brooke Baldwin was literally scared by Trump tweeting out a video of his pro-wrestling days and her colleague Jeff Zeleny was triggered by the sight of American and Polish flags waving together as he charged: “This is a white America, America First kind of speech. He was offering a very stark view.”

And of course the celebrities were also angered by Trump, as actor Johnny Depp joined Kathy Griffin in the list of artists issuing not-so-veiled death threats against Trump:

The following is a collection of worst media and celebrity outbursts from the past few weeks:

Another Day on MSNBC, Another Comparison to a Despot

Co-host Mika Brzezinski: “What could this be reminiscent of if you had to make a parallel, a president telling networks to turn off their cameras, a president telling untruths, lies to an audience of supporters that basically treat those lies as applause lines?”...
Analyst Jon Meacham: “Well, you’re alluding to fabled and terrible totalitarian regimes in Europe in the 1930s, I think, and the idea that – and also even now regimes like North Korea, where the dear leader speaks and we’re all supposed to salute.”
— MSNBC’s Morning Joe, June 22.

“It’s sad for the country. This is unprecedented, to have a president who behaves this way. Can anyone go back in history... we had to move outside the United States of America to find a parallel, and I believe it was North Korea. It does feel like a developing dictatorship.”
— Co-host Mika Brzezinski on MSNBC’s Morning Joe, June 23.

How Has Trump Not Been Arrested Yet?

“Our democracy, if not dead, is in suspended animation because the Republican Party is now actively shielding this treasonous megalomaniac because he will sign whatever they put in front of him. And their actions should be identified for what they are, being accessories after the fact to the worst set of crimes in American history.”
— Former MSNBC Host Keith Olbermann on GQ online show The Resistance with Keith Olbermann, June 27.

“Thousands and thousands of people were waving American flags and Polish flags. This was not a speech he could have given really any place else. This is a white America, America First kind of speech. He was offering a very stark view, actually, about the —  about migration, about immigration, about other things. It wasn’t a modern day speech, if you will. It was sort of a throwback speech.”
— CNN senior White House correspondent Jeff Zeleny on CNN’s Inside Politics, July 9.

“The first thing you learn when you study diplomacy is an American president or senator, congressman doesn’t dis their own country when they go abroad. That’s what Donald Trump has done on this trip and this whole visit has been embarrassing....Our First Lady is holed up in a hotel and she’s not able to go and meet the other wives of the G-2....We have the President of the United States sending crazy tweets about [John] Podesta....We’re seeing a shrinking of American prestige in the world before our very eyes....He’s already kissing the ring of Putin. Putin is going to go back already a champion.”
— CNN presidential historian Douglas Brinkley on CNN’s At This Hour, July 7.

“There are a lot of people that are working for Donald Trump now that are almost embarrassed to have it on their resume, meaning they work for somebody who seems to be involved in scandal all time. I mean, you go back to like Warren Harding and when early scandals of Teapot Dome. Nixon was in for a long time before those kinds of scandals really kicked in. But with this just the scandal a day going on, it’s a White House in disarray. You have a kind of – like a Mafioso, the family’s in charge only, and we keep it in our clan together.”
— CNN presidential historian Douglas Brinkley on CNN Tonight, July 12. 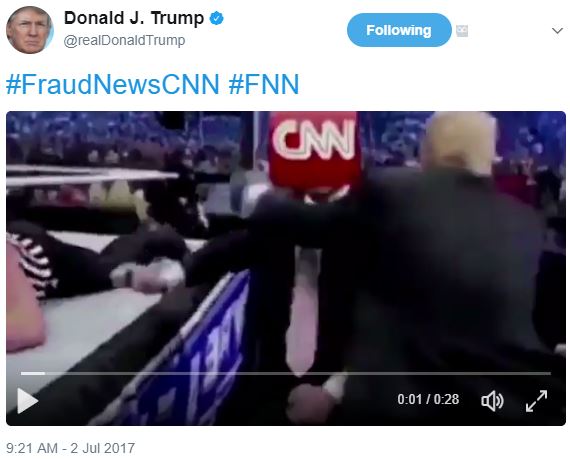 “This scares me. Mr. President, please STOP.”
— July 2 tweet by CNN host Brooke Baldwin, in reaction to Trump tweeting out video of him clothes-lining a man in a suit with CNN superimposed on his head.

“America, stand against this. Trump is going to end up getting a media person killed w/this incitement to violence. Maybe then, he’ll stop.”
— July 2 tweet by CNN political analyst Ana Navarro.

“Trump has brilliantly changed the subject from ‘Is he a Russian intelligence asset’ to ‘Is he a dangerously violent lunatic?’”
— July 2 tweet by The Atlantic senior editor David Frum.

“It seems today that the only block to authoritarianism is a free press. And President and his supporters are fullscale attacking that. Wow.”
— July 7 tweet by ABC News political analyst Matthew Dowd.

“Nobody is saying that what Donald Trump is doing now is right. In fact, we think it’s extraordinarily dangerous. Called the media enemy of the people. It’s Stalinist.”
— Co-host Joe Scarborough on MSNBC’s Morning Joe, June 29.

Warning: Mitch McConnell May Be Hazardous to Your Health

“If you are an at-risk American, if you are the poor or the elderly or somebody with a pre-existing condition or somebody who relies on a rural hospital, Mitch McConnell is more of a danger to your life right now than Vladimir Putin is. If he gets this thing through, it attacks so many people in this country who will end up eventually without health care and without health insurance.”
— New York Daily News columnist Mike Lupica on MSNBC’s Live with Stephanie Ruhle, July 10.

CNNer Doesn’t Know Much About History

“They are going on tonight to have dinner at the Eiffel Tower and tomorrow he’ll be along the parade route at Bastille Day which marks the 100th year of when the U.S. started helping – entered World War I.”
— Senior White House Correspondent Jeff Zeleny on CNN Newsroom With Brooke Baldwin, July 13. Bastille Day marks the anniversary of the start of the French Revolution on July 14, 1789, when angry French peasants stormed the Bastille prison.

Racist Republicans Are the “Greatest Threat to Democracy”

“Russia is not the greatest threat to democracy in America –  it is the Republican party....When you look at what Republicans are doing not just with this commission, but what they have done over the last 10 years, it is clear voter suppression....It was a guy named –  his last name was Smith –  a segregationist in Virginia –  he wouldn’t even have a committee meeting....during Civil Rights Movement. Bob Goodlatte, a Virginia congressman, won’t have a single hearing on the issue of voter integrity in the House.”
— Longtime CNN analyst, now News One Now Managing Editor Roland Martin on MSNBC Live, July 11.

“I don’t mean to sound sexist....but the fact that she [Ivanka Trump] sat in for her father in a dress that was so incredibly ornamental was such a contradiction in terms. And I think that what we see is that in patriarchal, authoritarian societies, daughters have great value –  they are property. And the message that she is sending about her own value, about her place in the White House, and about the place of women in this administration, I think, are really frightening....It’s a pink dress with big bows on the elbows –  there’s something incredibly ornamental. That’s not a dress that’s made for work. That’s not a dress that's made to go out in the world and make a difference. That is a dress that is designed to show off your girlieness, and, you know, God bless her, show it off, but don’t then tell us that you’re crusading for an equal place for women at the table because you’re not.”
— MSNBC political analyst and Nation correspondent Joan Walsh on MSNBC Live, July 9.

U.S. In No Position to Lecture Cuba About Human Rights?

“Well on Friday the White House also announced that they are reversing the Obama administration’s steps to normalize relations with Cuba because of their human rights violations. Forget about the fact he has shaken the hands of some of the biggest despots out there. We won’t point that out because that would be wrong of me. And because of their ties to hostile nations like North Korea. But Cuban officials said ‘really?’ Because the U.S. is in no condition to lecture us about human rights given the racial discrimination happening in America now.”
— Co-host Whoopi Goldberg on ABC’s The View, June 19.

Depp Dreams About Being a Modern Day John Wilkes Booth?

“Can we bring Trump here?...I think he needs help...When was the last time an actor assassinated a president?”
— Actor Johnny Depp at Glastonbury Festival in England on June 22, 2017.

“Where’s the holiday for single people?...Nobody celebrates us. And they really should because, you know what Mother Nature loves more than electric cars? Condoms. There’s literally nothing you can do that’s better for the environment than to not produce another resource-sucking, waste-making human being –  probably with a bad attitude....It all adds up to a fraction of the good it would do to have just one less child because that child increases your carbon legacy by over 9,000 tons.”
— Host Bill Maher on HBO’s Real Time, June 23. 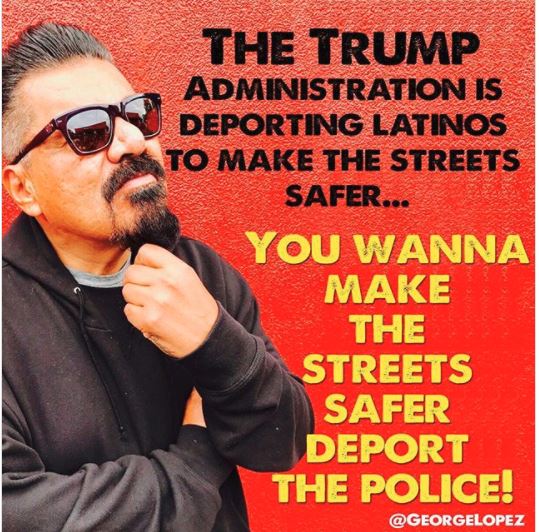 “The Trump administration is deporting Latinos to make the streets safer. You wanna make the streets safer deport the police!”
— July 7 Instagram post by comedian George Lopez. Lopez later backtracked “Comedy has a way of healing, but I also realize it can hurt too, so let’s let cooler heads prevail.”

“We got a P-U-S-S-Y grabber for president, and we are appalled. We can’t figure this out. And one of the reasons we did – we can’t figure it out is because elite media, as he would call it, failed us.”
— Former talk show host Phil Donahue on CNN’s Reliable Sources, June 25.