Posted below: the August 8 edition of Notable Quotables, MRC’s bi-weekly compilation of the latest outrageous quotes in the liberal media. This issue: NBC’s Andrea Mitchell, at the Democratic convention, likens President Barack Obama to Abraham Lincoln, while MSNBC's Chris Matthews gets in one last thrill, as he exclaims Obama has a smile like actress Julia Roberts.

Plus: ABC’s Terry Moran and NBC’s Kelly O'Donnell accused Gov. Chris Christie of inciting an anti-Hillary Clinton “mob” at the Republican convention. And HBO host Bill Maher actually attempts to rationalize recent shootings of police officers. The complete issue, with 24 quotes is posted below (or view the printer-friendly PDF version). 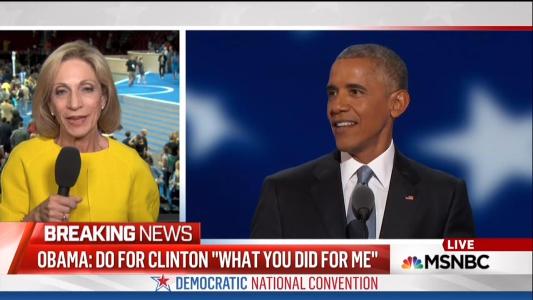 “[Barack Obama] invoked the audacity of hope, all of the spirit, all of the creativity of his own brilliant speech writing....I don’t think we’ve ever had a President, save Lincoln, who is as great a speechwriter as this man.”
— Correspondent Andrea Mitchell following Barack Obama’s speech as aired on MSNBC’s live Democratic convention coverage, July 27.

“It’s hard, frankly, to stop quoting from his [Barack Obama’s] remarks because they amounted to one of the most moving, inspiring valentines to this country that I’ve ever heard, brimming with regard for it and gratitude to it. We’re going to miss this man, America. Whatever his flaws, he’s been more than our president. Time and again, he’s been our national poet.”
— New York Times columnist Frank Bruni in July 28 piece, “Freedom from Fear”

One Last Fling for Chris?

“Well, it’s pretty well known I’ve always gone for this guy [Barack Obama]. I’ve liked the way he speaks about our country, from the time I first heard him in 2004 up in Boston at the convention....It was magnificent....He has that Julia Roberts smile of his that he saves and when he does it, you can’t resist the guy.”
— Hardball host Chris Matthews during MSNBC’s live Democratic convention coverage, July 27.

Honesty Is So Overrated

“FDR and Lincoln were both talented at letting both sides of an issue think that they agreed with both of them. Is honesty overrated as a presidential quality?”
— Correspondent John Dickerson’s question to Barack Obama on CBS’s Face the Nation, July 24.

Teeing Up Democrats to Trash Trump 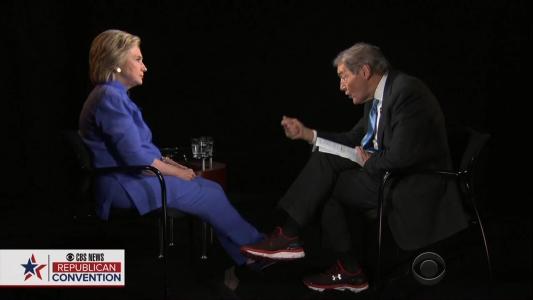 CBS This Morning host Charlie Rose: “We also talked about Donald Trump. And she [Hillary Clinton] was very tough and called him very dangerous, perhaps the most dangerous presidential candidate in the history of this country.”...
Hillary Clinton: “What he has laid out is the most dangerous, reckless approach to being president that I think we’ve ever seen.”
Rose: “The most dangerous man ever to run for President of the United States?”
Clinton: “I believe that.”
— Portion of interview aired during CBS’s live coverage of GOP convention, July 18.

“Hillary Clinton says that Trump is most dangerous candidate ever to run for president. On this very specific issue, do you personally find it frightening, the prospect of him having the nuclear codes?”
— Co-host Savannah Guthrie to President Barack Obama on NBC’s Today, July 27.

Co-anchor Scott Pelley: “Night two of the convention, the floor is covered with shards of glass. Hillary Clinton has shattered another ceiling for women.”...
Co-anchor Gayle King: “Happy tears in the room for Hillary Clinton and I mean a lot of tears. One man, a delegate from South Carolina, told me that he went into the ugly cry which means sobbing uncontrollably.”
— During CBS’s live Democratic convention coverage, July 26.

“For women who have long fought for a woman in the White House, the sight of Clinton walking out on to the stage dressed like a white knight will be something they’ll tell their daughters about.”
— Host Carol Costello on CNN Newsroom, July 29. 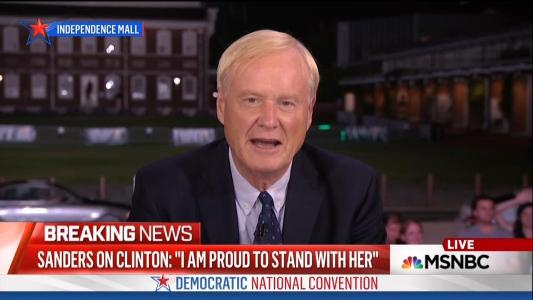 “I think there is going to be a magic moment in this convention, it’s going to be Thursday night. And a lot of women and a lot of men, too, are going to see Hillary Clinton as the first party nominee, who’s probably going to be elected  president....There are going to be misty eyes all across the country.”
— Hardball host Chris Matthews on NBC’s Meet the Press, July 24.

“Michelle was a show-stopper. I mean, you talk about glamour, charm, class, brains, elevation, family every point, role modeling for the nation....And then, of course, Elizabeth Warren, speaking to the very passionate progressives in the room....And I just thought the whole night was a slugger’s row of wonderful sentiments, from the high esteem the First Lady received, to the passion of the progressives to the — I have to say, good sportsmanship and better of Bernie Sanders.”
— Hardball host Chris Matthews during MSNBC’s live coverage of the Democratic convention, July 25.

“I don’t care what that woman up there, the mother has felt, her emotions are her own but for the country in choosing a leader, it’s wrong to have someone get up there and tell a lie about Hillary Clinton....I think it’s wrong that they ruined their evening with this.”
— Hardball host Chris Matthews after Pat Smith delivered her speech at GOP convention, July 18. 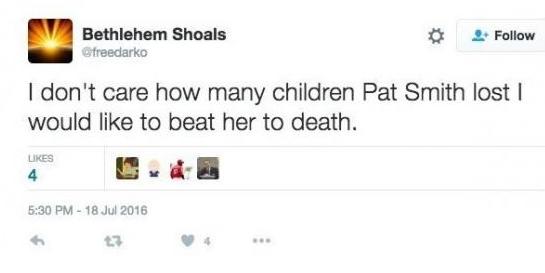 “I don’t care how many children Pat Smith lost I would like to beat her to death.”
— GQ basketball writer Nathaniel Friedman (AKA Bethlehem Shoals) in a July 18 tweet. Friedman later apologized.

“Well, on guns, he [Sen. Tim Kaine] was always there. He was heroic in Virginia on gun laws.”
— NBC’s Andrea Mitchell on Democratic vice presidential candidate Tim Kaine on Meet the Press, July 24.

“So, you did level this blistering indictment against Hillary Clinton. It brought the crowd to its feet. Do you think it’s good — They were chanting, ‘Lock her up. Lock her up,’ having a really good time with that. Do you think that is a good thing for American politics when political disagreements result in, basically, a crowd becoming a mob, saying lock her up?”
— Correspondent Terry Moran’s question to Gov. Chris Christie during ABC’s live coverage of GOP convention, July 19.

“You incited this crowd to get on their feet, to talk about her, to say ‘guilty’ over and over again. Do you think that is unifying the party in a way that’s good for the country?”
— Correspondent Kelly O’Donnell’s question to Chris Christie during MSNBC’s live coverage of GOP convention, July 19.

“It’s this festival of hating Hillary tonight, this brewing up of almost a witch-like ritual tonight...[Chris] Christie was up there with that very rough justice, I might put it, of Hillary Clinton, and he kept saying, ‘In each case I’m going to ask you for your verdict,’ it did remind me of those old swords and sandals movies with the Roman emperor going up and down in the coliseum. And I get the feeling, he wanted — if they had said, ‘kill her now,’ it was almost that bloodthirsty....And the audience always as requested, responded always with the verdict of guilty. And they said it in a blood curdling way every time.”
— Hardball host Chris Matthews during MSNBC’s live GOP convention coverage, July 19.

Threatened by a Chant? 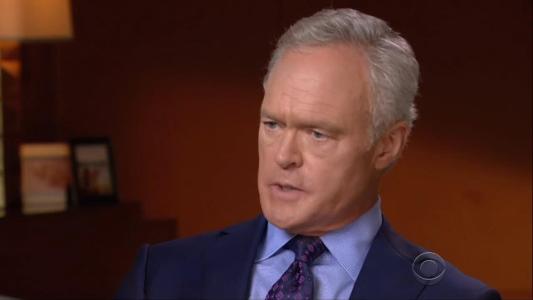 CBS Evening News anchor Scott Pelley: “Madame Secretary, did you hear the Republican convention chanting ‘Lock her up’?”
Hillary Clinton: “I didn’t hear it because I wasn’t watching, but I certainly heard about it, yes.”
Pelley: “Did you feel threatened by that?”
Clinton: “No, I felt sad...”
— Exchange on CBS’s 60 Minutes, July 24.

Trump Could Be “Gateway Drug” for KKK Becoming Mainstream in GOP

“One thing that’s getting traction on social media is the response to Donald Trump’s speech from David Duke, the former Klan leader....He says ‘Great Trump speech, America first, stop wars, defeat the corrupt elites, protect our borders, fair trade, couldn’t have said it better,’ meaning ‘couldn’t have said it better myself.’ And a lot of people who are critical of Donald Trump generally look at praise like that from someone like Donald [sic] Duke and wonder if he’s a gateway drug, if there is something beyond Donald Trump himself, that means a much greater transformation of the Republican Party into something that is going to be new to mainstream politics.”
— Anchor Rachel Maddow after Trump’s speech during MSNBC’s live coverage of the GOP convention, July 22.

“Melania Trump’s speech was the first of the night that didn’t have this subtext that....brown people are dangerous which was the kinda subtext of the rest of the night. There was a lot of really angry rhetoric, a lot of talk about murder and death and tying it all back to immigrants, tying it all back an illegal migration and there was a really hard-edged theme...If you’re a person of color, this is a weird place to be.”
— Host Joy Reid on MSNBC’s The Place for Politics 2016, July 19.

...But Her Dress Was Racist

“So while [Melania] Trump appeared flawless on the Cleveland stage Monday night, whether she intended it or not, her all-white ensemble displayed the kind of foreignness that is accepted by her husband’s political party. To many, that outfit could be another reminder that in the G.O.P. white is always right.”
— Philadelphia Inquirer fashion writer Elizabeth Wellington in a July 19 article, “Melania Trump’s Fashion: A Scary Statement”

In Denial About About Liberal Bias 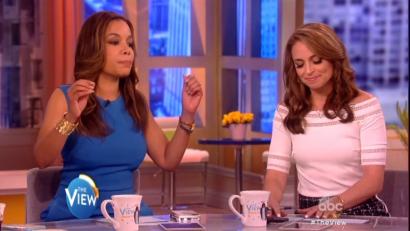 “I think our air, as opposed to others, is truly fair and balanced.”
— CNN President Jeffrey Zucker as quoted by Ramin Setoodeh in August 2 Variety article, “How Jeff Zucker Made CNN Great Again”

FNC’s Jedediah Bila: “The media is largely biased against Republicans, deal with it.”
The View co-host Sunny Hostin: “I don’t believe that. That’s not true. Tht’s not true. Only if you watch Fox News everyday....You’re like throwing flames out there....True journalists tell a story down the line, true journalists. So the suggestion you’re making is the media is biased, it’s dangerous and wrong.”
— Exchange on ABC’s The View, August 3.

“The shootings of policemen in Dallas, I totally do not condone, I hope everyone agrees with that, but I do kind of understand why at some point somebody would start shooting back. I mean, how many videos can you watch before someone goes nuts about it?”
— Host Bill Maher on HBO’s Real Time with Bill Maher, July 15.