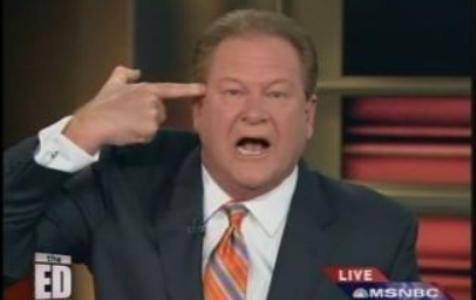 Due to extremely poor ratings, MSNBC formally announced Thursday it will bring down the ax on Ed Schultz and Alex Wagner. It turns out hate-mongering against conservative Republicans and sucking up to far-left Democrats is not a great way to attract large audiences.

In his time in the anchor chair on The Ed Show, Schultz accused Republicans of wanting to murder old people --“The Republicans lie! They want to see you dead!”-- and couldn’t believe President Barack Obama didn’t have sky-high approval ratings: “It amazes me that people don’t love Obama.”

Alex Wagner’s run on her eponymously named show Now with Alex Wagner included ridiculous overplaying of the race card -- “Usage of the word ‘thug’ spiked on Monday...Some people are saying the ‘T’ word is the new ‘N’ word”-- and silly sucking-up, as she gushed to Chelsea Clinton: “I must bring up the fact that your mother — she graced us all. Everyone is thrilled that she is now on Twitter.”

The following are the worst outbursts from Ed Schultz and Alex Wagner from the MRC’s archive:

“The Republicans lie! They want to see you dead! They’d rather make money off your dead corpse! They kind of like it when that woman has cancer and they don't have anything for her.”
— Ed Schultz, host of MSNBC's The Ed Show, September 23, 2009.

Alex Wagner Sucks Up to the Clintons

“When we talk about women’s participation and women’s involvement in the world, I must bring up the fact that your mother [Hillary Clinton] — she graced us all. Everyone is thrilled that she is now on Twitter. She has, in my humble opinion, one of the best Twitter bios on the Twittersphere.”
...
“This is, I think, the fifth anniversary of your mother’s ‘shattering the glass ceiling’ speech. Do you think we need — and I’m not naming names — do you think we need a woman in the White House? Do you think America needs to sort of achieve that milestone, being the leader in the globe that we are today?”
— Two of MSNBC host Alex Wagner’s questions for Chelsea Clinton on the June 14, 2013 edition of Now with Alex Wagner.

“Around immigration, there’s a sense that we need to punish people when they come here and they don’t know our language. We gotta punish people who came here the wrong way, even if they’ve been contributing to American society for a decade or more. Bigger, meaner, scarier fences by people suggesting electrified, alligator-filled moats to prevent ‘them’ coming in, by the language we use to talk about ‘those people’ who want to be here. You know what? Those people who want to be here are us. That’s what this country is made of.”
— MSNBC host Alex Wagner in one of her network’s “Lean Forward” commercials, aired during June 2013.

“Our next question is from Jimmy: ‘Do you think that the hateful rhetoric from Republicans puts President Obama and his family in danger?’ Well, the Republicans aren’t the only ones that come up with hateful rhetoric towards the President. Words count and words inspire people. My answer to that is yes.”
— Host Ed Schultz on MSNBC’s The Ed Show, October 1, 2014.

“Just when you thought the Republican Party’s open antagonism toward women and their reproductive organs couldn’t get any more hostile, hours ago, talk show host, former governor, and failed presidential candidate Mike Huckabee took it upon himself to ‘mansplain’ to the women of America how one party wants to tame their wild libidos.”
— Host Alex Wagner on MSNBC’s Now with Alex Wagner, January 23, 2014.

Schultz: “It Amazes Me that People Don’t Love Obama”

“I just cannot believe this number. Seriously. President Obama’s handling of the economy. Only 45 percent of the American people think he’s doing a good job on the economy and 52 percent disapprove? You mean to tell me we’ve had 41 months of private-sector job growth? We’ve got a stock market that is absolutely going through the roof? We’ve got record profits? People’s 401(k)s are in the market and that’s the best people think? You know what that is? That is a lot of negative campaigning in the media. That is the Republican, conservative effect on how we think as a country....It amazes me that people don’t love Obama.”
— Host Ed Schultz on MSNBC’s The Ed Show, September 13, 2013.

Anti-Illegal Immigration Protest Makes Alex Ashamed to Be an American

“When you see the footage of these furious crowds yelling ‘Go home, go home,’ I think it brings — I will say personally, I found it to be a shameful moment to be an American, to see people treated like that, people who are seeking a new day here in America.”
— Host Alex Wagner on MSNBC’s Now with Alex Wagner, July 2, 2014.

Schultz: Uncaring Paul Ryan Trying to Sell a “Turd in the Punch Bowl”

“[Congressman Paul] Ryan’s new plan takes power away from the federal government and gives it to private companies....Ryan is out there selling the turd in the punch bowl, trying to tell us that, ‘Oh, if we give all of this power to the states, Americans are going to be just a lot better off.’ Really? Backed up? Local elections with Citizens United? You’re going turn these kinds of decisions over to the locals? Ain’t going to happen and it should not happen. Ryan is as radical now as he has ever been....”
— Ed Schultz on MSNBC’s The Ed Show, July 24, 2014.

Host Alex Wagner: “Usage of the word ‘thug’ spiked on Monday — appearing in roughly 50,000 tweets....The word’s ubiquity has, this week, led to re-examination of the origins of the word ‘thug,’ and the debate over its racial connotations....Some people are saying the ‘T’ word is the new ‘N’ word. Give us your take.”
Salon contributor Brittney Cooper: “Sure. It’s rooted in a racialized understanding of black people. So, for instance, no one is calling the police who put this kid in a van and snapped his spine and crushed his voicebox ‘thugs’ — right?...When are we going to have a language to talk about the systemic violence that white folks do in the name of anti-blackness and white supremacy in this country?”
— Exchange on MSNBC’s Now with Alex Wagner, April 29, 2015.

Ask Ed: Why Are Republicans “So Mean to the Poor?”

“Our first question comes from Sue: ‘Why do Republicans claim to be Christians while being so mean to the poor?’ Well, they are mean to the poor because they don’t recognize the poor. They think if you’re poor and economically challenged in this country, it’s your own damned fault. That’s how the Republicans view it. Just look at the way they want to not support the budget and some of the social safety nets that are out there. They think it’s all about personal responsibility.”
— Host Ed Schultz answering viewer questions on MSNBC’s The Ed Show, August 20, 2014.

Alex Wagner: “Democrats hoping to get minority voters to the polls have instead focused on race and racial bias. In North Carolina, Harry Reid’s Senate Majority PAC ran this radio spot attacking GOP Senate candidate Tom Tillis.”
Ad clip: “Tillis won’t fight for us. Instead he made it harder for communities of color to vote, by restricting early voting and voter registration. Tillis even led the effort to pass the type of stand your ground laws that caused the shooting death of Trayvon Martin.”
Wagner: “In Georgia, state Democrats printed a flyer warning that the way to prevent ‘another Ferguson’ is to vote. Arkansas residents meanwhile, received a mailer showing a man in a hands-up, don’t shoot position made infamous in the wake of Michael Brown’s killing. The mailer reads: ‘If we want to end senseless killings like Michael Brown in Ferguson, Missouri, we need to vote’...It’s important to say that it shouldn’t have to be the threat of undermining civil rights that gets people to vote, but if it does, so much stronger the party is for it.”
— MSNBC’s Now with Alex Wagner, October 30, 2014.

“Florida Senator Marco Rubio got some good press this week for saving Nancy Reagan from a fall at a Reagan Library event. But when it comes to the rest of the American senior citizens, Rubio wants to leave them high and dry....Rubio is an early favorite to take the number two spot on the Republican presidential ticket next year thanks to his Tea Party ideology and his pretty boy looks. But his policies are downright ugly.”
— MSNBC host Ed Schultz on The Ed Show, August 25, 2011.

Melodramatic MSNBCer Wagner: “We Are Back in, Like, Margaret Sanger Days”

“I just can’t – you know, Cecile, it’s like every time we have a discussion it feels like the clock has turned back even more, you know. And it feels like the ACA was progress and it’s real, and yet the force is pulling us back – not just on the question of national health care, but on the question of access to contraception. I mean, we are back in, like, Margaret Sanger days here.”
—MSNBC’s Now with Alex Wagner, March 21, 2014.