Tracking liberal insanity is like playing Whack-A-Mole only instead of pesky moles, you get to bash bizarro lefties. (No actual hitting allowed.)  No army of critics could cover it all. Rather than try, we’re simply going to cherry pick some of the most demented each week.

As always, Huffington Post figures prominently as the intersection of the hard left and the mentally unbalanced. Truly a challenge to tell where one ends and the other begins.

1. The Princess and the He: Liberals have a weird Disney princess fetish. HuffPo, where everything is normal except heterosexuality and Christianity, profiles a 21-year-old “Instagram artist” name Richard Schaefer who dresses as your favorite Disney princesses. Schaefer’s cosplay includes Pocahontas, which libs would call “cultural appropriation” if he weren’t cross-dressing. Actual quote: “It doesn’t matter what Gender, race, or species you are, cosplay will always be for you. So embrace your inner princess and go out and fight those dragons! You’ll be glad you did.” Species? He said species? 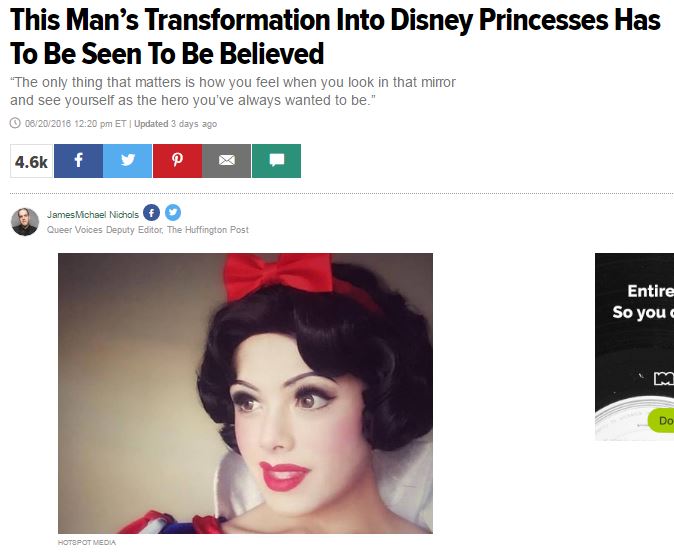 2. Shooting Themselves in the Foot: Liberal site Vox is always good for an explainer (rationalizer) story that shows up is actually down and Obama is somehow a competent president. But the Ezra Klein site outdid itself this week by claiming AR-15 owners can somehow attach a grenade launcher to their guns. (Remember, of course, gay-killing Islamic terrorist Omar Mateen didn’t even use an AR-15 but why let that get in the way of an agenda?)  IJ Review did one of several fun takedowns of Vox’s stupidity. Vox has made one other correction to the story, but the explosive allegation is still there. Yet somehow journalists take Vox seriously.

3. First Dr. X, Now Latinx: Liberals maul the King’s English. (Hopefully, there’s a Brexit victory party going on somewhere, so here’s to the queen.) They turn nouns into verbs -- like efforting. And just flat out make up new terms by adding the term phobia on the end. Now they’ve embraced a new gender-neutral term to refer to Hispanic people. Meet Latinx. No, it’s not some Latin superhero who’s part of the X-Men. (That’s Sunspot.) It’s just more lib doublespeak, courtesy of HuffPo. The story that kept calling America “a settler colony,” like every single spot on earth but a garden someplace doesn’t qualify. Actual quote: “Note: Latinx is used in place of the commonly-utilized Latino, because as a gender-neutral descriptor, it better encompasses the many Latinx communities in the U.S.”

4. Earth Calling Mort Zuckerman: Everyone who follows politics knows Salon.com is a box of crazy. It’s even resulted in a parody account. The New York Daily News has become the print equivalent of Salon, complete with ridiculous allegations and outlandish front pages. It’s so bad, you could almost write about it every single day. Kooky NY billionaire Zuckerman considered selling the whacky paper but no one wanted to buy a property that loses $20 million a year. (Shocker, I know.) Meanwhile, every few days, the paper begs for attention like some crazy guy smearing himself with his own feces. This week was no exception. On the bright side, 22 Daily News staffers just lost their jobs. All hail the free market.

5. Getting ‘Creative’ With Gender: Liberals aren’t just gender bending, now they are just making it up from whole cloth -- in this case a dress. HuffPo highlights the story of a mom who loves that her 10-year-old boy is “gender creative” and argues we need to “begin the journey towards acceptance, towards de-stigmatization of boys in dresses.” Not that liberals are trying to screw up the next generation or anything and turn us into momma’s boys. (Or is that boyz? Boyx?) The boy in question (or Questioning as libs say) has been doing this for seven years. You bet mommy helped encourage it. Actual quote: “He hasn’t identified as transgender at this point in his life, and he may never. He may be gay, he may be straight, he may be bi, trans, asexual, questioning or pansexual; right now, he self-identifies as “gender creative,” and I’m fine with that.” Mom of the year. Ugh.

6. Someone Get That Man An Editor: It wouldn’t be a list of liberal insanity without Salon, the motherlode of madness. Admittedly, this came from BillMoyers.com, the former PBS journalist, but Salon still ran it. This is Neal Gabler’s feral rant about “what really ails our political discourse.” Natch, he says Republicans. Actual quote: “the Republican Party, with its history of dog-whistle racism, sexism, homophobia, nativism, and gun addiction, salted now by incipient fascism, has been legitimized by the mainstream media for years.” Legitimized? By that, does he mean attacked, undercut, criticized, maligned and opposed? Apparently, the media’s jihad against the right just isn’t jihadi enough for Prof. Gabler. In fact, the GOP isn’t just a political party to him. Actual quote: “Today’s GOP is closer to a religious cult than a political institution.” Of course, Gabler hides in academia, the only place other than media for loons like him.