The Liberal Media’s Collective Yawn: Looking Back at the Last 10 Marches for Life 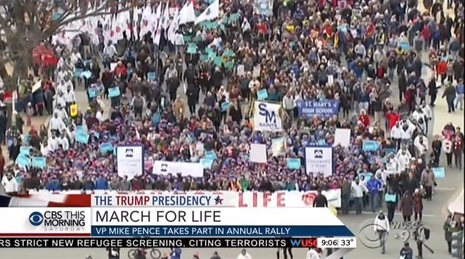 Friday marked the 2023 March for Life on the National Mall in Washington D.C. with hundreds of thousands of pro-lifers to coincide with Sunday’s 50th anniversary of Roe v. Wade being argued before the Supreme Court. And, with zero preview coverage Friday morning on the broadcast network news shows, it appears as though this will mark the eighth March for Life in the past 10 years with either zero or scant attention.

NewsBusters examined the previous nine Marches for Life and found that, in six of the nine, the broadcast networks gave less than a minute combined coverage on their flagship evening newscasts after the march and morning news shows the day after. All told, the march has received 25 minutes and 50 seconds dating back to 2013.

Half of that (13 minutes and 10 seconds) came from the 2017 march, which marked the first of Donald Trump’s presidency and just days before he announced Neil Gorsuch to fill the Supreme Court vacancy left by the sudden death of Justice Antonin Scalia. As such, this all but forced the networks to acknowledge the peaceful attendees.

Over on ABC, correspondent Mary Bruce said on World News Tonight that there were “crowds as far as the eye could see.” Even leftist Alex Wagner said on CBS This Morning: Saturday that a “large crowd from across the country” came to Washington.

Before Donald Trump’s election, the March for Life was a non-story for the liberal networks. Ten years ago, there was only 30 seconds with a 17-second mention on NBC Nightly News and a 13-second brief Saturday on ABC’s Good Morning America. On NBC, Lyin’ Brian Williams told viewers that “thousands of anti-abortion demonstrators marched to the steps of the Supreme Court.” 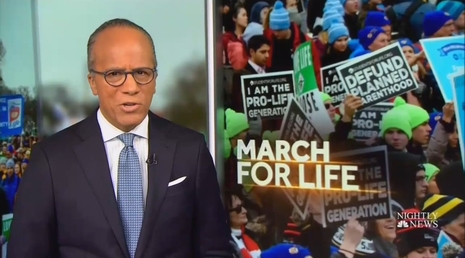 But for 2016, it fell to zero seconds, which was also the total for the 2021 event held virtually due to the coronavirus pandemic.

Following 2017’s massive draw, the 2018 March for Life was still higher than 2013-2016, but its three minutes and one second was in stark contrast to the year prior.

While both [fill-in anchor Savannah] Guthrie and NBC White House correspondent Kristen Welker called the event by name (“March for Life”), they both repeatedly used the term “anti-abortion” to describe the pro-life marchers.

In the field, Welker reported on the march as a political event by insisting that the movement was “celebrated by marchers energizing his [Trump’s] conservative base.” She interviewed two marchers: one who expressed thanks to the president for supporting life and an adoptive mother who stressed choosing adoption rather than abortion.

But again, Welker turned to politics that “loomed large.”

“Once in the oval office, he's touted some victories for the movement,” she said, before adding he fell short as “other campaign promises have lagged” like defunding Planned Parenthood and limiting late-term abortions.

During World News Tonight, ABC anchor David Muir spent a mere 17 seconds on the march. According to him, just “thousands” attended. Like NBC, his report also centered around the President, “addressing the 45th annual March for Life.”

CBS didn’t give the marchers, or the unborn they spoke for, one mention. Instead, Evening News covered topics like giant waves and a 93-year-old widower whose life still revolves around his wife.

The next two years saw further declines. In 2019, the March for Life had 58 seconds and was dwarfed by the 14 minutes and 26 seconds (over four days) swooning over the far-left Women’s March.

Trump became the first sitting President to address the March for Life in-person on January 24, 2020, but the networks were knee-deep in his first impeachment trial, so they relegated the march to 28 seconds (15 seconds on ABC and 13 seconds on CBS).

While the impeachment trial was playing out on Capitol Hill, Mr. Trump was on the National Mall Friday. He addressed the March for Life, the annual anti-abortion rally held on the anniversary of the landmark Roe v. Wade decision.

And finally, last year’s march came nearly two months after oral arguments of the landmark case Dobbs vs. Jackson Women’s Health Organization, whose decision overturned Roe and returned the issue to the states. As such, ABC, CBS, and NBC combined for six minutes and 42 seconds on the issue.

Better yet, Crawford wasn’t swatted down when she framed the March for Life as filled “with signs and hope” with “thousands, mostly young people” who “came to march for life” (click “expand”):

NORAH O’DONNELL: Next year marks 50 years since the Supreme Court affirmed a woman’s right to an abortion with the landmark Roe v. Wade decision. Every year, there’s a march here in Washington, but this one was different, with opponents feeling emboldened, as states have imposed tighter restrictions. CBS’s Jan Crawford reports.

MARCH FOR LIFE ATTENDEE: The kids don’t get to choose life, and we’re here for them to march for the people that couldn’t speak up.

CRAWFORD: They came with church groups on buses, from Florida to Oklahoma.

MARCH FOR LIFE ATTENDEE: We took about 24 hours.

CRAWFORD: Braving freezing temperatures in the 49th annual march to the Supreme Court, with the most momentum yet in their fight to overturn Roe vs. Wade.

CRAWFORD: Is there a different energy here with the Mississippi case pending?

MANCINI: Absolutely. Pro-lifers are very energized with the possibility of Roe being overturned, which would mean that then the abortion legislation would go back to the states. 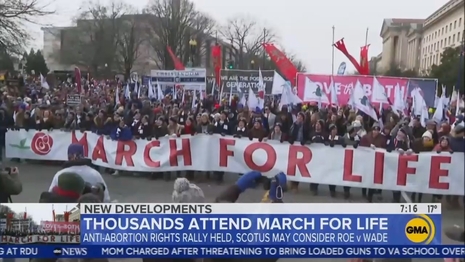 The next morning was mixed. ABC’s Good Morning America had co-host Janai Norman highlighting the “[t]housands of anti-abortion rights activists” who “brav[ed] the cold” and then White House correspondent Karen Travers explaining that the event returned with “high” “enthusiasm”.

Travers wouldn’t grant them any further positive framing, suggesting they were a distinct minority. As proof, she touted an ABC News/Washington Post poll that claimed “60 percent of Americans...support the Supreme Court upholding Roe” and “58 percent say they oppose state laws making it harder for abortion clinics to operate

“This weekend, Planned Parenthood and their local partners are opening a new regional logistics center to ease that burden on patients, providing things like transportation, food, lodging, and cash assistance,” she said in her report, which included a fawning interview with Planned Parenthood CEO Alexis McGill Johnson.

We’ll see how the networks cover the 2023 march, but if Friday mornings zeroes were any indication, we could wind up with the seventh time in ten years that the March for Life received less than a minute of coverage from the network morning and evening newscasts that last week saw a combined 30.83 million viewers.