In the morning after Russian President Vladimir Putin all but annexed two Ukrainian provinces, the major broadcast network newscasts largely chose Tuesday to absolve President Biden and his team for Putin feeling emboldened to take another step in what he views as reclaiming the old Russian empire.

Instead, one buried the reality on Friday as CBS’s Face the Nation moderator Margaret Brennan said this on the CBS Evening News: “It was on his watch back in 2014 when he was Vice President that he ran Ukraine policy, and...Vladimir Putin annexed Crimea...and fed the fighting in the east of the country. And he didn't pay a large price for that.”

But back to Tuesday where it was largely peddling the supposed actions the administration and its NATO allies were taking to combat Russia (while not mentioning the fact that all previous finger-wagging had failed).

On NBC’s Today, co-host Hoda Kotb said in a tease that the U.S. “call[ed]” Putin “sending troops into eastern Ukraine...a clear and unprovoked attack during an emergency meeting of the U.N. Security Council” as they’re “already imposing sanctions, vowing more to come.” 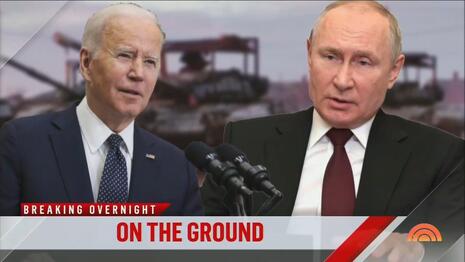 Kotb, co-host Savannah Guthrie, and chief foreign correspondent Richard Engel also boasted of the U.N. meeting as if it were significant.

While chief White House correspondent Kristen Welker did the same, she gave the game away in terms of its pointlessness in saying who ran the meeting: “That tense meeting overnight at the U.N. Security Council which Russia currently chairs comes as the White House braces for what it says is an imminent invasion[.]”

Welker only alluded to Biden facing “pressure” from both parties “to get tougher with Putin right now,” which, as we’ll see, matched the tone of ABC and CBS.

She continued, insisting the “administration has taken a hard line” “for weeks” (click “expand”):

WELKER: On Monday, the White House scrambling to respond. After meeting with his national security team, President Biden signing an executive order imposing limited sanctions on the Russian separatist regions of Ukraine with more possible today. The administration warning these initial rounds are separate from larger, more punishing sanctions Washington has prepared should Putin invade. Still, Republicans and even some Democrats are calling on the President to get tougher. Close ally of President Biden, Delaware Senator Chris Coons said, “the time for taking action to impose significant costs on Putin and the Kremlin starts now.”

SENATOR TOM COTTON [on FNC’s America’s Newsroom, 02/21/22]: What are we waiting on? We need to tell Vladimir Putin exactly what we are going to do if we are going to have any effect whatsoever.

WELKER: For weeks the Biden administration has taken a hard line.

JAKE SULLIVAN [on NBC’s Meet the Press, 02/20/22]: President Biden has spoken to the fact that if a Russian tank or a Russian troop moves across the border that's an invasion.

WELKER: But when pressed on whether the Russian forces crossing the border into Ukraine met definition of an invasion, a senior administration official didn't answer the question, but noted Russian troops have been in those regions for years. Now, as for those new sanctions, expected today, the administration has said it will coordinate with allies and partners but has not said who will be targeted. All of this comes, of course, as the president had agreed in principle to a summit with President Putin, but only if Russia does not invade Ukraine. This morning, the prospects for that summit or any diplomatic path are growing dimmer by the hour.

GUTHRIE: Much debate about what constitutes an invasion in this context. 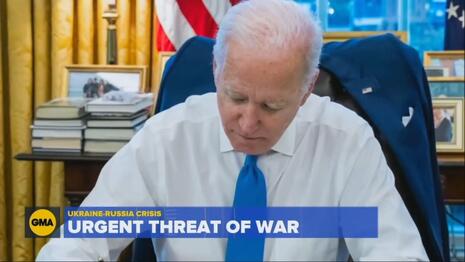 Co-host Robin Roberts and This Week co-host Martha Raddatz were also all in on the U.N. meeting with the latter boasting of “[a]llied countries blasting Putin’s actions” even though “hopes” for “diplomacy” are “dwindling.”

Speaking from the White House, correspondent Mary Bruce said Biden’s actions “will hit Russia directly” and reminded viewers that he “has said all along that if Russian forces cross the Ukrainian border, there will be swift and severe costs but Biden administration is already facing growing pressure from both parties...to act faster, to be more aggressive.”

So as to grease the skids, he added a caveat that “past...sanctions have done little to deter” Putin.

CBS Mornings featured some criticism of Biden, but it only came from two guests unaffiliated with CBS.

Adding that U.N. ambassadors “urged Russia to back down,” she kept Biden out of the picture other than saying he “issue[d] new, limited sanctions on investments in or exports from those regions” following Putin’s Monday afternoon speech.

In the show’s second hour, co-host Nate Burleson passed long a State Department statement that “call[ed] Putin’s actions ‘a major escalation’” with it unclear whether Secretary of State Antony Blinken would still meet with his Russian counterpart.

In contrast, Eurasia Group’s Ian Bremmer and Senator Marco Rubio (R-FL) called out the “failure” of the U.S. and its allies to thwart Putin and the administration’s lack of both domestic energy production and strong, initial condemnations (click “expand”):

BREMMER: It is the end of the Minsk process. The Americans, the Europeans have coordinated in saying this was unacceptable and that sanctions would result as a consequence. It is the failure of the negotiations process that the Americans and our European allies have been working on assiduously for months now.

BREMMER: You remember when they attacked the Colonial pipeline, brought a lot of Americans offline and lacking energy. They stopped doing that when Biden warned them for a few months, but they've now called the Americans’ bluff, so cyber attacks are likely to come again. That really matters to us as well.

DOKOUPIL: Sanctions were not effective in 2014 when it came to Russia taking Crimea. What hope is there for them today?

RUBIO: Well, I don’t believe the sanctions are going to stop them from doing what their plan is, but I do think — if you don't pay a price for doing this, he's going to do more of it. If you listen to that speech yesterday, the argument he used for why invading Ukraine — the old Soviet rules — you could make that argument about any of the Baltic states, who are all — who are now all members of NATO and many of those Baltic states were actually part of the, you know, the old Russian empire, even longer than Ukraine. You could use the same argument to take those, so he's not going to stop with Ukraine if he's allowed. He must pay a big price for it, but I also think we've got to return, for example, to our own energy production as a matter of national security emergency now because Russia and this disruption that this is going to create is going to increase oil prices and we're going to feel it at the pump here in America and that, by the way will increase prices on everything because everything that we buy and sell is transported by something that’s burning gas and diesel.

RUBIO: Well, they should have treated it yesterday as a full-scale invasion. I hope that's what they'll do today. Last night they seemed to indicate that them moving into areas controlled by separatists is public acknowledgment of what already was true, so I didn't think that was an appropriate response. But, I think beyond that, if you look at one of the things that gave Putin the belief that now is the time to act, it's the price of energy around the world. Global oil prices and the decision in the United States to make it harder to do oil and gas exploration has contributed to those higher prices which, in turn, has empowered them. And, in an ironic way, even though this crisis is going to create higher oil prices, that benefits Putin and that’s his leverage. We will see. He believes that the Europeans, who depend on him heavily for their energy sources — oil and natural gas, will not be able to sustain sanctions against him for long because of energy prices. And so, I — it was a big mistake to sort of make it harder to do exploration. We became energy independent in 2018. We need to go back to that.

The media treating Biden with kid gloves was sponsored by Aleve (on ABC), Amazon (on CBS), and Hyundai (on NBC). Follow the links to see their contact information at the MRC’s Conservatives Fight Back page.

To see the relevant transcripts from February 22, click here for ABC, here for CBS, and here for NBC.